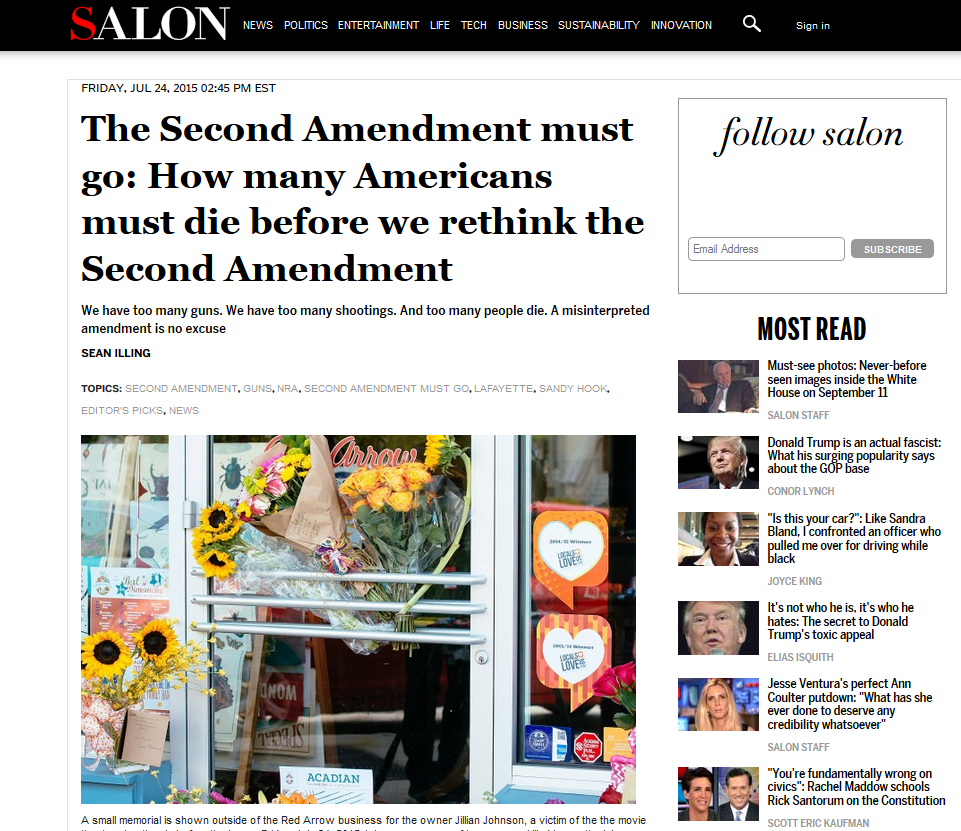 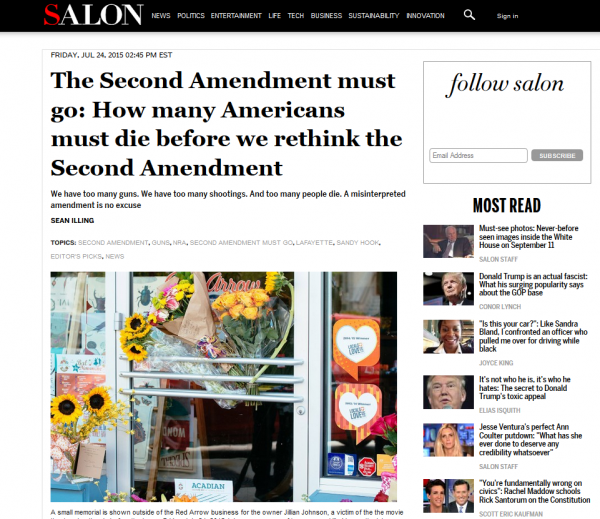 “THE SECOND AMENDMENT PROTECTS MILITIAS, NOT THE INDIVIDUAL’S RIGHT TO CARRY A PISTOL”

(INTELLIHUB) — Shortly after the shooting in a Lafayette, Louisiana theater, liberals throughout the mainstream media quickly begun to once again call for increased “reasonable” gun control.

Pretending to support the right to bear arms, most liberal commentators insisted that all they wanted to do was stop the senseless gun violence (of course they completely ignored the inner city where a vast majority of gun violence takes place, most of the time with illegal weapons) with so-called common sense reforms.

While many patriots and freedom minded individuals already know that most on the hard left want a full out gun ban, these liberal commentators and “journalists” were careful to mask their calls for gun control with empty platitudes about hunting and defending oneself. Luckily, at least one liberal news outlet just couldn’t control themselves and, in turn, revealed what kind of gun control most on the left are calling for.

In a disgusting attack on private gun ownership in America, complete with half truths and blatant lies, Air Force Veteran and hard left activist Sean Illing revealed how far liberals really want to go when they talk about “common sense” reform.

The article starts off with multiple dramatic paragraphs lamenting how bad gun violence has gotten in America (again competently ignoring actual FBI data or other inconvenient truths) and how a vast lobby of gun nuts are stopping the passing of new gun control laws that most Americans actually support.

Eventually Illing gets to the point of the matter which in a nutshell is a rehash of the same talking points used by gun control zealots in the past. The Constitution is old, it’s not really that important, and it can be changed whenever the majority decides.

The Second Amendment fanatics will surely remind us that guns are quintessentially American. That’s true, of course: the Second Amendment exists. But that’s not the end of the conversation. That something is written in the constitution doesn’t mean it’s sacrosanct.

The document, after all, enshrined slavery and denied full personhood to black people. At any rate, contrary to the disastrous Supreme Court ruling in 2008, the Second Amendment protects militias, not the individual’s right to carry a pistol in a supermarket or a theatre. It wasn’t until the NRA bought the Republican Party (Jindal included) and began pushing for a reinterpretation of the amendment that it came to mean something other than it does.

In that one paragraph Illing apparently decided it was time to rewrite history as well as directly lie to the reader with the ludicrous claim that the 2nd Amendment only became about private gun ownership after the NRA “bought” the Republican Party when in reality the right to bear arms by everyday citizens has been a fundamental right since the founding of the country. Illing also laughably argues that a major Supreme Court ruling that affirmed the exact opposite of what he is claiming means absolutely nothing because he and his allies said so!

The next part of the article moves from laughably absurd to downright strange with Illing attempting some sort of Orwellian mindtrick by claiming he supports the rights of hunters and the need for self-defense. Remember, the actual title of his article is, “The Second Amendment must go: How many Americans must die before we rethink the 2nd Amendment.”

I respect the rights of hunters to hunt and the need for self-defense is very real, but we’ve got to be honest about the costs of allowing so many guns on the street. The NRA says the “only thing that stops a bad guy with a gun is a good guy with a gun,” and that’s not as stupid as some suggest, but perhaps more laws and fewer guns is even better.

No Mr. Illing you do not support hunters or the need for self-defense as is clearly evident in the very article where you claim this support.

Further highlighting how absurdly Orwellian the wording of this article actually is, it then promotes Australia as a place we should look to for gun law guidance.

And the people who say we can’t get rid of guns are lying or ignorant or both. In Australia, a country governed by adults, radical new gun laws were imposed after a mass shooting, which included a mandatory buy-back program.

The laws, by any measure, were a tremendous success. It’s possible to do something about guns, in other words – difficult, but possible.

There you have it. The liberal gun control agenda on full display and it includes banning and confiscating the guns of millions of Americans.

After a mass shooting in 1997, the Australian government instituted a massive gun buy back program that ended private gun ownership in the country. So when liberals like Illing say that it was a “tremendous success” you know what that success actually looks like.

Of course, the gun ban in Australian, while hailed as a victory by liberals worldwide, was actually a complete failure and led to huge increases in violent crime. (similar to what we have seen in Chicago)

In the past, President Obama has also brought up Australia in his calls for more gun control in America. A National Review article published in 2014 detailed this fact.

Obama said: “Couple of decades ago, Australia had a mass shooting, similar to Columbine or Newtown. And Australia just said, well, that’s it, we’re not doing, we’re not seeing that again, and basically imposed very severe, tough gun laws, and they haven’t had a mass shooting since. Our levels of gun violence are off the charts. There’s no advanced, developed country that would put up with this.”

In other words, the president of the United States just praised a government for forcefully removing all semi-automatic firearms (i.e. a remarkable number of the guns in America and the majority of those sold today) from its citizenry.  Let me be clear, as Obama likes to say: You simply cannot praise Australia’s gun-laws without praising the country’s mass confiscation program. That is Australia’s law.

When the Left says that we should respond to shootings as Australia did, they don’t mean that we should institute background checks on private sales; they mean that they we should ban and confiscate guns. No amount of wooly words can change this. Again, one doesn’t bring up countries that have confiscated firearms as a shining example unless one wishes to push the conversation toward confiscation.

The fact that both Obama and liberal commentators have brought up Australia numerous times in conjunction with new calls for gun control in the United States directly proves that full-scale gun confiscation is the agenda and newer articles such as the one written by Illing show that they have absolutely not given up on this plan.