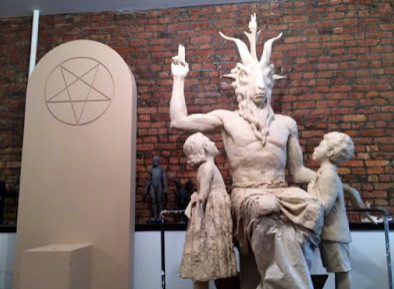 After the Satanic Temple failed in getting permission to erect their statue near the Ten Commandments in Oklahoma, the group finally unveiled their one-ton, nine-foot-tall bronze Baphomet statue in Detroit, Michigan reportedly to chants of “hail Satan!”

“Baphomet contains binary elements symbolizing a reconciliation of opposites, emblematic of the willingness to embrace, and even celebrate differences,” Jex Blackmore, who organized the unveiling, told TIME late Sunday night. In a sense, the statue is a stress test of American plurality: at what point does religious freedom make the people uncomfortable?

And that’s pretty much it. Some of the 700 people who attended the unveiling rushed to have their pictures taken with the statue, probably to put them up on Facebook or something, you know, share with the friends and fam.