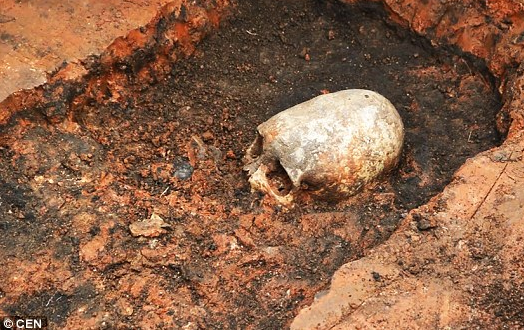 Does this remind anyone else of the crystal skulls from the 4th Indiana Jones movie?

A two-thousand-year-old skeleton with an elongated “cone-shaped” head has been found in Arkaim, Central Russia, a place known as “Russia’s Stonehenge” because it was thought to have been used by ancient astronomers.

While some UFO enthusiasts have claimed this is proof aliens visited Earth, archaeologists are saying the skull is shaped this way because it was bound in a tribal tradition.

Researcher Maria Makurova has confirmed to the Russian news agency TASS: ‘We have found a well-preserved skeleton. I would not exclude the possibility that the skeleton belongs to a woman from the Sarmati tribe that lived in the territories of what is now modern day Ukraine, Kazakhstan and southern Russia. Her skull was elongated because the tribe did so by tying up the heads of their children with rope. It was clearly a tradition in the tribe.’

Then again, that’s the thing about events that happened a long, long time ago. Archaeologists are working with theories. That’s it. Their theories are upheld when they published these theories in peer-reviewed journals where other archaeologists go, “Yep, sounds like a solid theory, we agree.”

What do we really know about what happened here? What if the researcher had said the skull was due to a birth deformity? Let’s just admit the average person could be told anything here by the very nature of the situation.

Remember once upon a time, paleontologists thought the brontosaurus was a dinosaur, too.

As X-Files’ Mulder would say, “The truth is out there.”