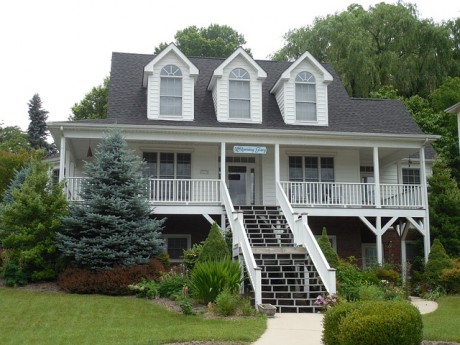 Thanks to the “Obama recovery”, the rate of homeownership in the United States has fallen to the lowest level in 48 years.  The percentage of Americans that own a home is widely considered to be a key indicator of the health of the middle class, and we have just learned that during the second quarter of 2015 that number dropped from 63.7 percent to 63.4 percent.  It is now the lowest that it has been since 1967.  Unlike a lot of other government economic statistics, this one is fairly difficult to manipulate.  Either someone owns a home or they do not.  And what the homeownership rate is telling us is that the percentage of Americans that can qualify for a mortgage has been falling dramatically.  Just take a look at the following chart.  This is not just a decline – this is a complete and utter collapse… 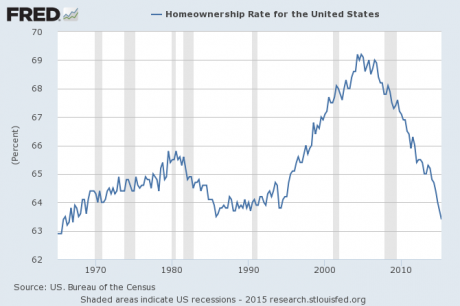 Never before in U.S. history has the rate of homeownership fallen so far or so fast.

So what is the bottom line to all of this?

The bottom line is that the middle class is dying.

When I was growing up, I lived in a pretty typical middle class neighborhood and I went to a pretty typical high school.  I didn’t know anybody that was “rich”, but I didn’t know anybody that was poor either.  At that time, it seemed like just about anyone that was willing to work hard and be dependable could find a decent job.  Most families that I knew had a nice home and a couple of vehicles in the driveway.  Life was not perfect, but at least things felt “normal”.

But now things have changed.  The “American Dream” is becoming out of reach for an increasingly large number of people.  In fact, the percentage of Americans that do not believe that they will be able to buy a home “for the foreseeable future” just continues to soar.  The following comes from Zero Hedge…

Three months ago, just as the last Census Homeownership and residential vacancy report hit, Gallup released its latest survey which confirmed just how dead the American Dream has become for tens if not hundreds of millions of Americans.

According to the poll, the number of Americans who did not currently own a home and say they do not think they will buy a home in “the foreseeable future,” had risen by one third to 41%, vs. “only” 31% two years ago. Non-homeowners’ expectations of buying a house in the next year or five years were unchanged, suggesting little change in the short-term housing market.

As Gallup wryly puts it, “what may have been a longer-term goal for many may now not be a goal at all, and this could have an effect on the longer-term housing market.” 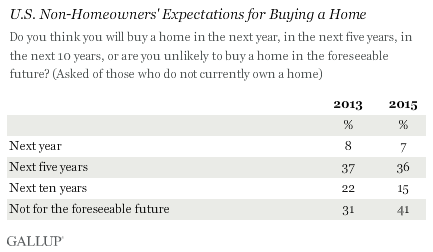 Why are so many Americans unable to buy homes?

It is because of a lack of good jobs.

Since the year 2000, real median household income in the United States has declined by about 5000 dollars.  Good paying manufacturing jobs that once fueled the rise of the middle class are being shipped overseas, and they are being replaced by low paying service jobs.

This is the new “Obama economy”, and it is absolutely shredding the middle class.

Back in 2008, 53 percent of all Americans still considered themselves to be part of the “middle class”.

Since fewer and fewer of us can now afford a mortgage, more people than ever are being forced to rent, and this has helped push rents into the stratosphere.  Here is more from Zero Hedge…

Because as homeownership falls, demand for rental housing is booming. The vacancy rate for rented homes in the U.S. fell to 6.8% in the first quarter from 7.5% a year earlier. It was the lowest first-quarter rate since 1986.

And the punchline, which should come as no surprise to anyone: the median monthly asking rent just rose to a record $803 across the US.

Unfortunately, as bad as these numbers are right now, they are about to get a whole lot worse.

As I have been warning about repeatedly, we stand on the very precipice of the next great financial crisis.  These are the last days of “normal life” in America, and we are about to enter a period of time which is going to be extraordinarily difficult and which is going to last for years.

So the truth is that this is not really a good time to be taking out a huge mortgage anyway.  During this next crisis, it will be very important to be “lean and mean”.  The less debt you have, the better off you will be.

If you do have a mortgage right now, that is okay.  Just be sure to build up an emergency fund so that you can make your mortgage payments if you lose your job or your business suffers a reversal.

Don’t forget what happened back in 2008.  When the stock market collapsed, millions of Americans started to lose their jobs, and because most of them were living paycheck to paycheck all of a sudden a whole lot of them could not make their mortgage payments.

We saw foreclosures surge like crazy, and millions of families that were once living comfortable middle class lifestyles very rapidly found themselves dumped out of their homes.

This is why I am constantly pounding away on the need for a sizable emergency fund.  During a crisis situation, the last thing that you are going to need is for someone to be trying to kick you out of your home.  Please make sure that you have a fund that can cover your rent or mortgage for at least six months.

If you are living paycheck to paycheck and you can barely afford the home that you are currently living in, there is no shame in selling your current place and moving to a more affordable location.  It is very, very tough for many people to downsize, but it could end up being a huge blessing in the end.

We are moving into a time in which conditions are going to be changing rapidly.

What worked in the past may not necessarily work in the future.

So be be flexible, be prayerful, and don’t be afraid to do what you think is best for you and your family.