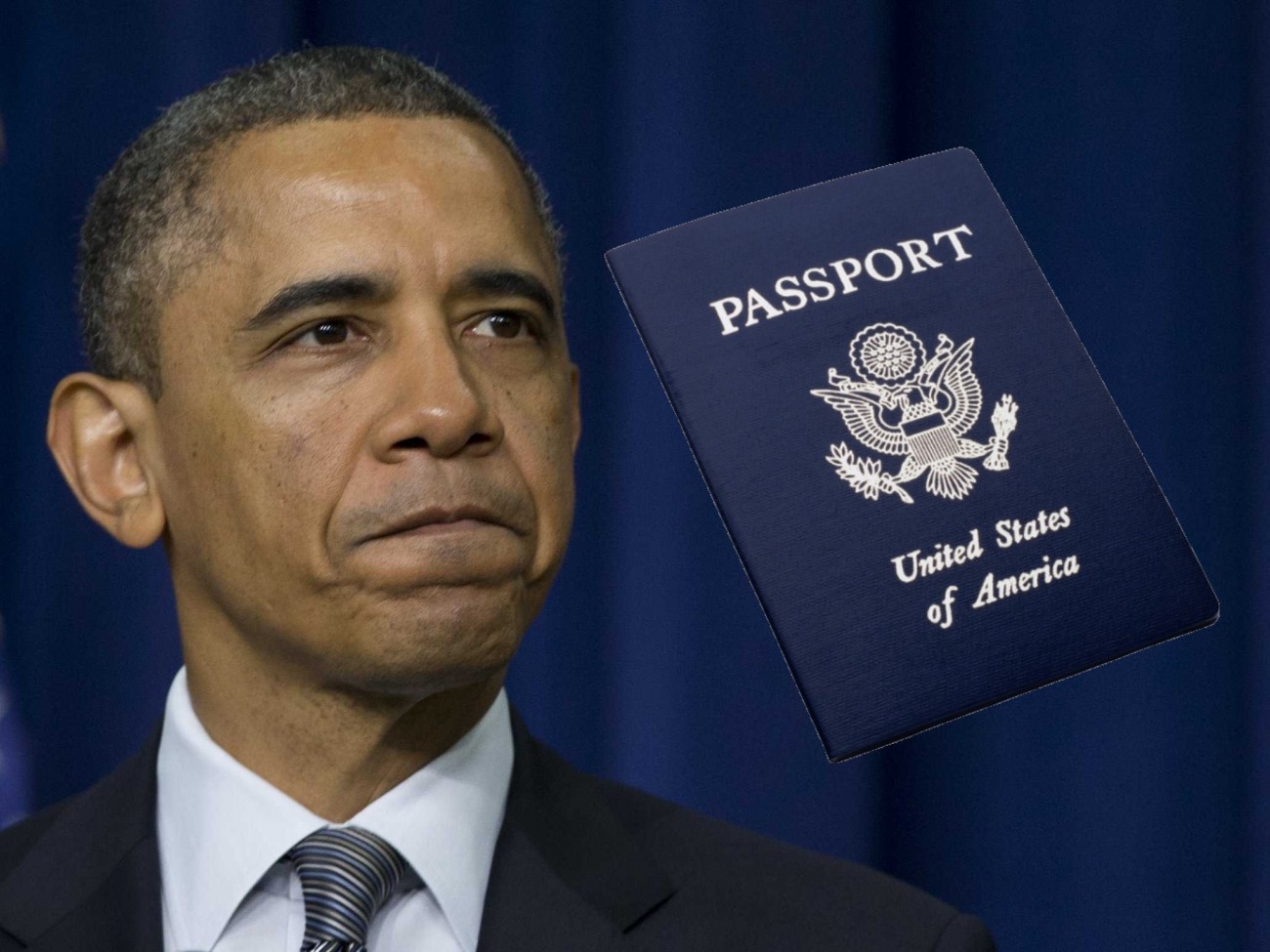 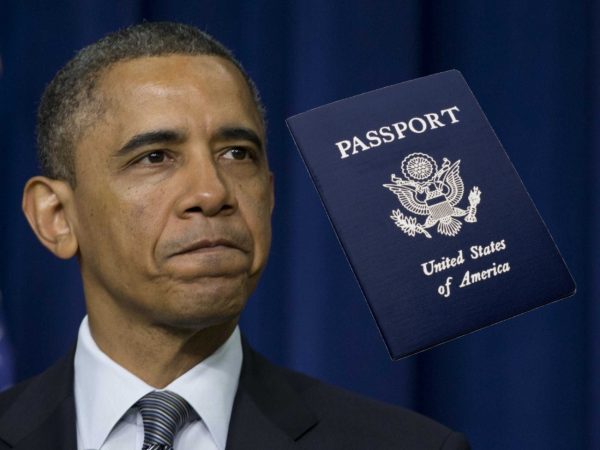 Another day, another right lost to the political corruption in Washington. In a move that has garnered almost “no” media attention, the House of Representatives passed HR 237, known as the “FTO (foreign terrorist organization) Passport Revocation Act, which allows the “Obama administration the unilateral power to strip you of your passport and right to travel without a trial or even criminal charges.” This piece of legislation did not receive a “recorded vote” due to the “uncontroversial” support and passed after only 15 minutes of “supposed” debate. For anyone caught up in this “web” wrongly, there is no recourse contained in the legislation to “challenge the status as a non-person involuntarily trapped inside US borders by order of the secretary of state.”

According to Infowars.com, “Lawmakers, some of whom could themselves be caught in the dragnet along with myriad administration officials, praised the effort as a way to stop alleged terrorists from travelling.”

Congress wants to prevent “alleged terrorists” from travelling. Moreover, who does the federal government consider as terrorists? Documents obtained by Judicial Watch indicate the government considers approximately 72 types of US citizens as potential terrorists, while any reference to Islam is conspicuously missing. The White House, aka Ayatollah Obama, declares the unilateral authority to murder by drone or detain American citizens indefinitely without due process, charging them with a crime, or on “alleged” criminal activity.

The federal government wants to prevent “alleged terrorists” from leaving the country; however, this same government allows American citizens who fought with ISIS to return with impunity while claiming to “monitor” these traitors. So, just who is the government trying to keep from leaving? It’s not Islamic jihadis.

Americans can thank Rep. Ted Poe (R-TX) for his sponsorship of the bill, which was “adopted under ‘suspension of the rules’ typically used for trivialities such as renaming post offices.” In looking at the bill, it clearly states, “to authorize the revocation or denial of passports and passport cards to individuals affiliated with foreign terrorist organizations, and for other purposes.” [Emphasis mine.]

Some who read this bill will say, “Now, Suzanne, you are going off the deep end here with this as it only applies to individuals who aid, abet, assist or help ‘an organization the Secretary of State has designated as a foreign terrorist organization’. There’s nothing to worry about if we’re not helping terrorist organizations.”

Well, under any other circumstances with any other Congress, president, Secretary of State prior to say 1990, there might not be cause for worry. However, with the liberal usurpation of unilateral authority to murder with drones and hold US citizens indefinitely without any due process, the stretch to false accusations for nefarious purposes by this administration or anyone in it isn’t far. There are no set criteria in this “new” attack on liberty. The terms are undefined and there remains no appeals process. It creates an avenue for widespread abuse by the current Secretary of State, John Kerry, along with future occupants of that office.

Did anything in that document declare that actual evidence had to exist to invoke a passport revocation? The only criteria the document indicated were “whom the Secretary of State has determined ….” Basically, the new legislation, should it pass the Senate and be signed by Ayatollah Obama, could leave citizens stranded outside the United States as well as prevent citizens from leaving based on “secret” evidence or the whim of “one” individual. As a reminder, the NSA maintains a vast database of unlawfully, unconstitutionally gathered communications data on every US citizen that could be “sliced and diced” against targeted individuals to produce an appearance of “criminality” where none exists.

Naturally, Rep. Poe spins his “tapestry” like this. “Daily, deadly attacks around the world remind us that radical Islamic terrorists are spreading their murderous rampage worldwide. The threat to America from these groups has never been greater. But some of our own citizens have traveled to the terrorists hotbeds in Syria and beyond to fight for the other side. These Benedict Arnold traitors who have turned against America and joined the ranks of foreign radical terrorist armies should lose all rights afforded to our citizens.”

No one would argue that traitors should lose their rights, but only after following due process, a trial by jury and a finding of guilt for treason or being guilty of being a traitor. However, the determination of revocation of rights by one individual, instead of the due process guaranteed every US citizen in the Constitution, reeks of unilateral, dictatorial power.

Poe continued by saying, “This will help law enforcement locate these individuals by making it easier to flag the individuals who are trying to travel internationally. Most importantly, this legislation will help prevent Americans from coming back to the United States undetected.”

Anyone else want to call “BS?” With an open southern border allowing who knows who to cross and be welcomed with open arms and our Ayatollah importing unvetted Muslims daily from every terrorist nation in the Middle East into our communities, these “charlatans” are more concerned about Americans re-entering “undetected.” The FBI knows who these individuals are and the FBI allows them to re-enter the US with impunity. Granted, these individuals should not be allowed to return; however, US citizens should be afforded due process in order to establish their guilt or innocence. Guilty individuals should receive a traitor’s punishment. Poe certainly does not want to address the policy of illegal, unconstitutional “amnesty” or the lack of enforcement of immigration laws as it relates to this “passport revocation.”

Could anyone answer the question of how many non-Muslim US citizens actually travel to terrorist nations to fight with terrorists? Let’s be honest here. All terrorists are Muslims, while not all Muslims are terrorists — yet.

Poe, like a good little RINO, continues digging a pothole. He states, “The House has now acted to locate and contain these traitors. It’s time for the Senate to quickly do the same. These people are not returning to America to open up coffee shops; they’re coming back to kill. Let’s stop them from coming back at all.”

It sounds good and something on which everyone could agree. In fact, known terrorists should be barred entry or re-entry into this nation; however, it’s moot when the administration imports terrorists freely daily. To clarify, the United States should bar the immigration of Muslims and the re-entry of Muslims into this nation. The “Americans” who are leaving to fight with terrorists have a connection to Islam. Still, the Constitution affords every US citizen due process. A better idea would be to stop importing terrorists by denying Islam-practicing individuals entry into this nation. Instead of identifying the problem as Islam and acting accordingly, this lame government blindly barrels forward with inept legislation filled with “unintended consequences;” or, is it?

And, what about “containing” the traitors sitting in this administration, Congress and the biggest one of all, Ayatollah Obama? Funny, nothing mentioned about that. Treason is treason and traitors are traitors whether they aid and abet the enemy or violate their oath of office to support, protect, defend and uphold the Constitution of the united States of America. Maybe Poe should start looking in both chambers of Congress and the White House first.

According to Infowars.com, “Critics said it was yet another attack on the fundamental rights of Americans, such as due process protections, and that it must be resisted.”

But, this is the crux of the issue – attacking the fundamental rights of Americans – not a crackdown on those who participate in treasonous and terrorist activities. Poe called individuals who joined to fight with foreign Islamic terror groups as “Benedict Arnold traitors.” Would that not also include those who “aid and abet” those groups? The legislation declares it so, which means the dragnet would net Senator John McCain should he desire to travel and pose with known terrorists, again. Not only would McCain be caught, but so would Kerry, Obama, Jarrett and a host of other officials. Oh wait, they exempt themselves; however, these individuals are some of the biggest supporters of terrorist and terrorist organizations in the united States.

Another surprise Americans face is the denial of travel for “alleged tax debts.” As the New American reports, “… just this week, the Senate included a provision in the ‘transportation’ bill it introduced that would strip the passports of anyone the IRS claims owes over $50,000.” Section 52102 of the Senate bill calls for revocation or denial of passports based on unpaid taxes. The Commissioner of the Internal Revenue Service only has to submit “certification” to the Secretary of State stating an individual “has a seriously delinquent tax debt in an amount in excess of $50,000, ….” Considering the honesty of the IRS, Americans need not be concerned, or so some would contend. At the rate Obama uses the IRS as his “strong arm” against political opposition with impunity, every American should be concerned.

All of this is nothing more than bypassing US citizens’ rights to due process.

Anyone who studies the history of the rise of Nazi Germany knows that on October 5, 1938, a passport revocation decree resulted in the confiscation of passports held by Jewish German citizens. While the House has not specifically targeted a “certain” group or groups of citizens, the “unintended consequences” are enormous for that to happen considering the propensity for this administration to target opposition groups. If this administration continues its criminal course to unilaterally deny individual God-given rights guaranteed by the Constitution, our nation’s government will follow the path of Hitler’s regime. They will succeed as long as citizens continue their “head down” to get by plan of inaction and liberal “traitors” continue their support of a corrupt government and administration.