It doesn't get more blatant and in your face than this. Meet your dynasty families, America. pic.twitter.com/V9JU0jEg5u

TIME featured an article all about how, while Hillary and Jeb are appearing to duke it out on the campaign trail, George W. and Bill just appeared together onstage at the Bush Presidential Center “in a celebration of postpartisan good works.”

By the way, wasn’t it Bill Clinton who said George H. W. Bush was like a father to him and he and G. W. are “brothers from another mother”? 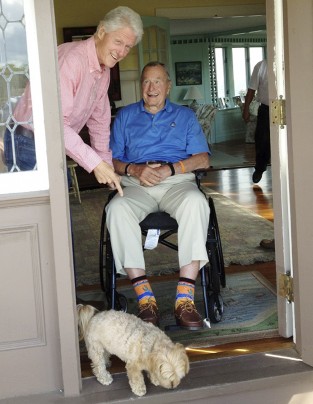 It’s all in the family.

Establishment propaganda mouthpiece extraordinaire TIME is ‘talking 2016′ with a Bush and a Clinton because it has already been decided that either a Bush or a Clinton will be taking over the White House after the next “election” (read: selection).

In case you still didn’t know for sure, you are straight up being told who your unofficial dynasty families are here, America. It’s as simple (and blatant) as that. It’s being thrown in our faces like a bully’s mud pie on an elementary school playground.

The Democratic ticket is a joke to pretend Hillary actually has any competition, and the ridiculous number of Republican candidates being thrown out there (complete with distractions like Donald Trump) are just to make it look like Jeb has an overwhelming amount of competition when in all actuality, one of these two has already been chosen to be the next president in 2016.

People love to get trapped in the two-party paradigm (it’s human nature), making that last part really hard to accept.

Look who Wall Street and all the cronies are throwing their billions behind in this election: it’s all Hillary and Jeb. In many cases, they are funding both sides simultaneously. Why? Because they know it won’t matter either way. They are two sides of the same oligarchical coin. As I’ve said before, even if the average American’s vote counted (which, is highly doubtful for so many reasons, the least of which is voter fraud and electronic voter machine tampering), the average citizen’s contributions have already been far and away overshadowed by billionaires and corporations backing Hillary and Jeb for 2016.

Again, there’s a reason the Bilderberg Group had “U.S. elections” listed as one of this year’s official talking points. They were deciding who will be “crowned” our next president and whether or not it would be Hillary or Jeb.

That’s it. That’s really all there is to it. Even people who claimed their vote mattered in prior elections cannot possibly be so naive as to fail to even question whether or not it actually still does now.

So the next time you see someone who still blindly believes their vote matters in modern American presidential elections, give him or her a hug before you gently tell them the truth. Then go ahead and politely let them know that Santa Claus, the Easter bunny, and the tooth fairy aren’t real either.