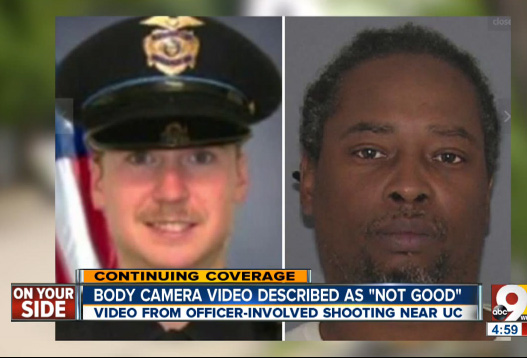 University of Cincinnati Police Officer Ray Tensing has been indicted, as of Wednesday, on a murder charge in the death of Samuel DuBose.

Hamilton County Prosecutor Joe Deters: “He should have never been a police officer.”

Police bodycam video of #SamDubose being shot and killed is so bad, Cincinnati prepares for riots http://t.co/A5tlVfF0GG

First Ferguson. Then New York City. Then Baltimore. Now, Cincinnati is apparently next.

A man was apparently shot and killed by a cop wearing a body camera that caught the entire incident after a routine traffic stop for a missing front license plate. The victim, 43-year-old Sam Dubose, was pronounced dead at the scene.

Since Jennifer Baker of Revolution News put it so succinctly, we’ll just quote her for the details:

Sam Dubose ended up dead with his face blown off after a routine traffic stop by a University of Cincinnati Police Officer. Officer Ray Tensing was wearing a body camera at the time of the shooting and recorded the incident. Those that have seen the video footage and made comments about it seem deeply disturbed, including the citywide police chief.

Listening to city officials and law enforcement discuss the body cam video, you know it’s gotta be pretty bad. By all accounts, those who have watched the footage appear to realize the killing was in no way justified.

Cleveland is where 12-year-old Tamir Rice was shot dead without a moment’s hesitation for playing with a toy gun at a park. Everyone expected full-on riots in Ohio then. With George Soros backing civil unrest to the tune of millions to stoke a new civil rights movement in America, we can likely look to Cincinnati for the next big set of protests-turned-riots in the weeks ahead.