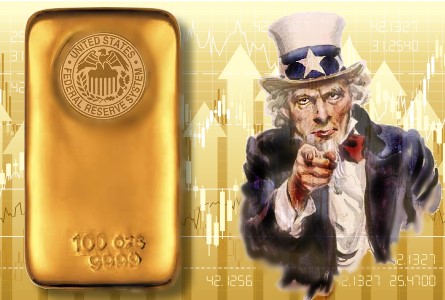 The gold price manipulation scheme will go down as the biggest financial market scandal in US history for numerous reasons. They include the destruction of the free market system in the United States. The manipulation of the gold and silver prices eventually led to the manipulation of US interest rates via the Fed, the stock market via the Plunge Protection Team, and to the currency markets. – Bill Murphy, GATA.org

The gold manipulation scheme has taken on historic proportions. It’s been going on for several decades – witness the London gold pools of the 1960s which were implemented to prevent the price of gold from taking off because the U.S. was running out of gold with which to back the Treasury debt it had issued to foreign creditors who were redeeming their Treasury notes for gold per the Bretton Woods Agreement.

Ultimately this scheme failed when Charles de Gaulle famously began redeeming France’s Treasuries for gold because he had calculated that the U.S. had issued significantly more Treasuries than it had gold to back those Treasuries. France pulled out of the London gold pool operation and a couple years later Nixon was forced close the gold window or, rather, end the convertibility of foreign-owned Treasuries into gold.

Frank Veneroso, who wrote the brilliant “Gold Book” in 1998, told Sprott’s John Embry and I many years ago that the gold price suppression scheme was “much bigger than you think.” Frank found out the US Government was taping his phone calls and ever since has shut up about what GATA has to say. Frank was the one who exposed the gold leasing scheme, which is how The Gold Cartel did their thing so many years ago. It is how GATA knows the central banks have well less than half the gold they say they have in their vaults. Frank got his information from a Bank of England source who has since died.  – Bill Murphy

Each new financial crisis (emerging market debt, Long Term Capital, tech bubble, housing/credit bubble, etc) was met with successively larger amounts of money printing and credit creation. Print money to keep the banks and the markets from collapsing and create more credit to keep the giant Ponzi scheme going. Once the gold bull market got underway in late 2000/early 2001, in order support the monetary intervention required to keep the U.S. systemic “shell game” going, the manipulation of the gold markets began to intensify. It also started to become more obvious in nature to those where researching, trading and investing in the precious metals sector. GATA was and is instrumental in exposing and reporting the facts about the manipulation of the gold market.

At the end of 2000, the Treasury had $5.6 trillion in debt outstanding.  The current amount is $18.15 trillion but there is a debt issuance ceiling in force now for which the Obama Government is circumventing by raiding Federal pension funds, the Social Security Trust, issuing IOUs and other cash “reservoirs” that will soon run out. The debt ceiling will have to be lifted again, like to $20 trillion. That’s nearly a 400% increase in just Treasury debt since 2000. At the end of 2000, the Treasury debt-to-GDP ratio was 54%. Today it is 102.5% and this does not include the Treasury’s Fannie Mae and Freddie Mac guarantees.  In other words, the amount of Government debt has grown at twice the nominal rate of the U.S. economy in the same time period.  Note: the “wealth” produced by the U.S. is part of the theoretical backing of the dollar.

This is just Government on-balance-sheet debt. Total Government contingent liabilities, i.e. on-balance-sheet plus off-balance-sheet, is now estimated by several different sources to be at least $200 trillion. This would include pension, Social Security, and several other Government entitlement programs. Recently it was estimated that State pension funds are now underfunded by at least $2 trillion. Student loan debt is now well over $1 trillion, of which 30%-40% in arrears or in outright/technical default. Most private pension funds are at least underfunded by 50%.

An “underfunded” liability is a socially correct term for “debt.”  When the stock and credit markets re-collapse, the underfunded status of most if not all pensions will likely approach more like 90%.  Some pensions will  be wiped out.

Then there’s the derivatives…

The point here is that the fundamentals underpinning the precious metals market have strengthened cumulatively since the gold bull market began. There has not been one point in time in the last 15 years, in fact, when these fundamentals have weakened. What has changed is the degree of intervention engaged in by the Central Banks and U.S. Government as a means of preventing the price of gold from rising and signalling to the world that the U.S. political and economic system – the system which issues the world’s reserve currency – is increasingly corrupt, criminal and entirely fraudulent.

Yes, China has its issues as well but it has two things that the U.S. does not:  $3.4 trillion in foreign currency reserves backed by a big trade surplus and a massive amount of gold.  On the other hand, the U.S. foreign reserves are roughly $39 billion and it runs a $40 billion/month trade deficit.  It is highly unlikely that the U.S. Government possesses legal title to little if any gold.

In my opinion, the ability of the U.S. in conjunction with its European vassals and the BIS to keep the U.S. dollar fiat money system in motion is largely dependent on the ability to keep the price of gold suppressed.  In 2011, when silver threatened to take out $50 and gold was headed in the $2000s, the U.S. elitists were staring into the abyss.  That’s when the gold market intervention took on a whole new dimension.  This is best visualized with this graphic:

The dislocation in the correlation between the price of gold and the size of the Fed balance sheet shown in the graph above is further supported by the manipulation activity reflected in these two graphs (inset chart on the bottom graph sourced from Zerohedge, with my edits) – click to enlarge image: 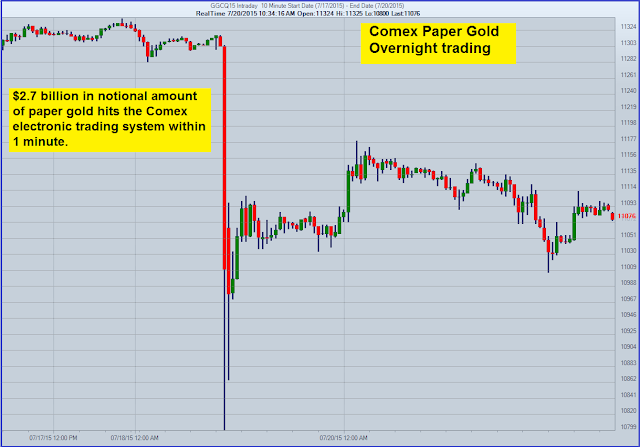 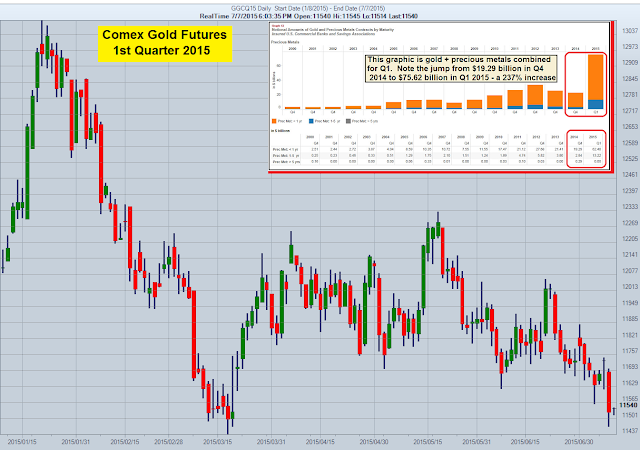 The graph on top shows the massive paper ambush on the gold futures market on Sunday evening July 19. An enormous amount of paper gold contracts were dumped into the Comex’s globex electronic trading system during one of the slowest trading periods at any point in time during the trading week. A bona fide seller trying to sell a big position at the best possible execution prices would never have dumped a position like this. The only explanation is that someone wanted to drive the price the price of gold lower and make a point of doing so. This particular occurrence in the gold market has been a recurring event over the life of the gold bull market. However, the frequency of the above trading pattern has significantly increased since 2011.

The next graph, prepared by the TFMetalsReport, shows the record level of the ratio of paper gold to physical gold on the Comex – 117x. You can see the ratio exploded and went vertical starting mid-2013, which is right around the time Bernanke delivered his infamous “QE taper speech.” This graph unequivocally reflects the sense of desperation by the Fed and the Treasury in its efforts to push the price of gold lower using the extremely fraudulent paper gold market. 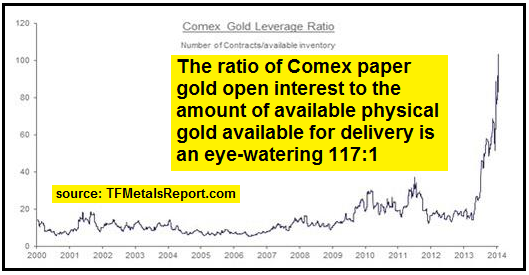 Finally, since mid-December, when it seems some sort of derivatives bomb exploded – LINK –  the anti-gold propaganda from the media has significantly intensified. This is especially true since the July 19 ambush.  It’s not just anti-gold propaganda, however, it’s a grotesque preponderance of insidious misinformation and disinformation.  The blatant manipulation of the gold market in conjunction with the rabid dissemination of anti-gold rhetoric from both the financial press and Wall Street reeks of desperation – desperation to keep a lid on the one market signal that would undermine the elitists’ perpetuation of the U.S. dollar-based systemic Ponzi scheme which enables them to loot and confiscate middle class wealth (“middle class” being defined as anyone not wealthy enough to buy their own politician or not in the privileged position to benefit from the wealth confiscation schemes).

The Shadow of Truth will be releasing a podcast in two parts of a two-hour conversation with Jim Willie sometime tomorrow.  In a portion of the podcast, Jim Willie lays out the elaborate scheme being used to keep interest rates low and to push the dollar higher in one last desperate attempt to maintain the reserve status of the U.S. dollar and global hegemony of the United States, both of which are being systematically dismantled. Keeping a lid on the price of gold is the nexus of the blueprint for implementing the extreme market intervention by the Federal Reserve and the Treasury’s Working Group on Financial markets.

When the intervention in the gold market fails, which it inevitably will as have all other market interventions in history, it will have the systemic effect of delivering a massive blow from a 2 x 4 on the back of the heads of the unsuspecting public in this country.  In other words, be prepared for life to become very uncomfortable in every respect.  My personal view is that this will be the case even for those of us who have taken steps to prepare for this inevitability.

You can read more from Dave Kranzler at his site InvestmentResearchDynamics.com.