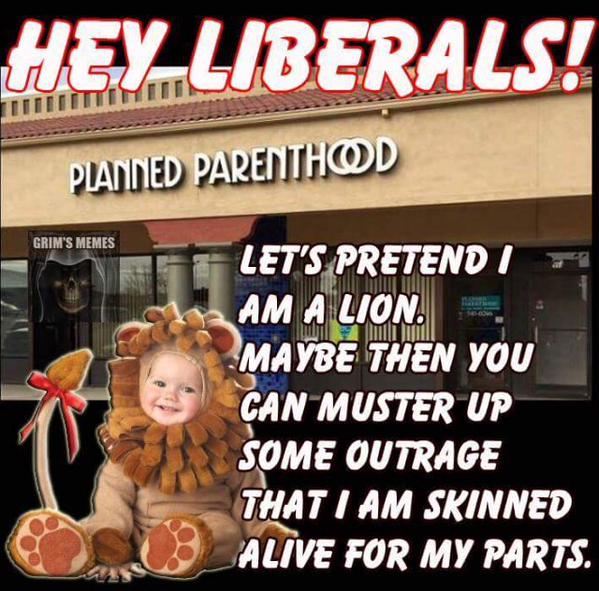 The entire controversy surrounding “Cecil the Lion” proves that liberals value the lives of animals as infinitely more important than those of unborn babies.

To be clear, posing with dead animals that you shot while they were imprisoned in a pen doesn’t make you a real man, it makes you a reprehensible moron.

Why does trophy hunting even exist at all? I mean, surely there’s a better way for people like Walter Palmer to release their frustration at having a micro-penis than butchering beautiful endangered animals.

But what’s just as alarming as the tragic death of Cecil is the ability of Twitter outrage mobs and the mass media to generate such rabid hysteria within such a short period of time.

And as per usual, it’s laced with the most rampant hypocrisy you could ever imagine.

Take PETA for example – People for the Ethical Treatment of Animals – they wasted no time in grandstanding over Cecil the Lion, accusing Palmer of lacking “empathy, understanding, and respect for living creatures.”

Because PETA really is the shining example of treating living creatures with respect, right? That’s why they murder 96% of the animals that come through their door.

PETA really cares about Cecil’s common cat ancestors – that’s why they use your donations to kill perfectly healthy kittens and dump them in garbage bags.

PETA’s entire business model revolves around slaughtering healthy, defenseless animals, so for them to try to attract more sympathy dollars by sticking up for Cecil the Lion is beyond a joke.

But what of the Orwellian two minutes of hate that forced Walter Palmer to go into hiding?

Again, we see the frightening ability of Twitter and the mainstream media to manipulate people into an instant frenzy.

Yes this is an outrage. But notice how you’ll never see such coordinated outrage directed towards individuals, institutions, or practices that are actually screwing over humanity as a whole?

If only big banks like HSBC had received a shred of the condemnation directed towards Walter Palmer for their illegal money laundering for arms and drug dealers – a practice that has destroyed untold thousands of lives.

If only liberals showed the same concern for the 30,000 Zimbabweans slaughtered by Mugabe’s death squads as they did Cecil the Lion.

This was a typical response to the story; “He should have his legs broken and then left out in the middle of the reserve for the lions to hunt him.”

If he committed a crime, Walter Palmer should be punished to the full extent of the law. But is this how we show our so-called humanity? By expressing the desire to see a fellow human eaten alive by lions?

And why is it only liberals who get a free pass to make death threats, so long as everyone is sufficiently outraged?

Piers Morgan wrote of his plan to hunt down Palmer, skin him alive and behead him ISIS-style. PETA President Ingrid Newkirk called for Palmer to be hanged.

Really? Is this how we display our enlightened compassion – by sharing the same bloodthirsty disregard for life that led Palmer to kill Cecil the Lion in the first place?

How can we be kind to animals if this is what we’re prepared to do to each other?

Now imagine if a pregnant woman had posted a picture of herself about to undergo a late term abortion.

Then imagine if thousands of right-wing Christians had vowed to reveal her address, hunt her down and decapitate her. Would the hashtag hipsters get behind that?

Imagine if there was a huge shadowy organization funded by the U.S. government that was selling body parts from aborted babies. Oh yeah, that just happened and hardly anyone gave a damn.

In fact, American news networks gave Cecil the Lion more coverage in one day than the Planned Parenthood videos got in 2 weeks.

Imagine if there was an evil doctor who was killing babies after they’d been born. Literally allowing newborn babies to swim around in toilets before butchering them.

Oh yeah, that actually happened too, but there was no Twitter shaming crusade directed against Kermit Gosnell – and it took 56 days for all three broadcast networks in the U.S. to even report on it.

Because apparently, our compassionate humanism means that we care infinitely more about big cats than we do about actual defenseless human babies.