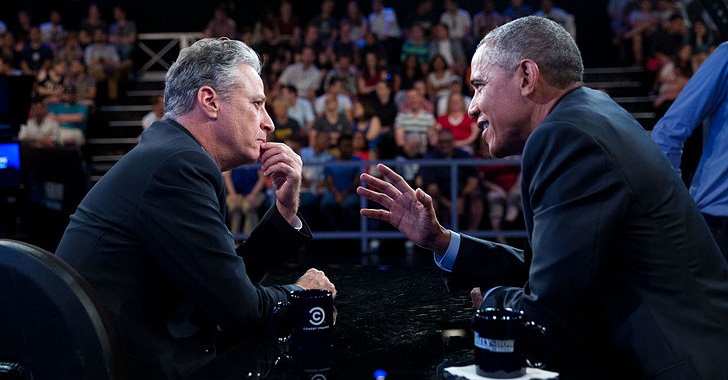 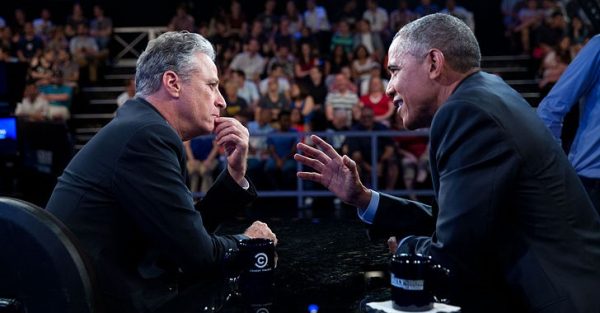 For sixteen years, Jon Stewart and the Daily Show have entertained and informed millions of Americans. As Stewart’s reign as the country’s top political satirist nears an end, new revelations call his principles as a news commentator into question. According to a new report by Politico, Stewart secretly met with President Obama on two politically-charged occasions, producing slanted content after the fact that favored the president’s image.

Three former political aids confirmed that amid the October 2011 budget crisis and the February 2014 U.S. standoff with Russia over Ukraine, Jon Stewart was summoned to the White House to meet with the president. In the 2014 instance, he came from Manhattan to Washington D.C., “…for a midmorning visit hours before the president would go before television cameras to warn Russia that ‘there will be costs’ if it made any further military intervention in Ukraine.”

Sure enough, the first Daily Show following Stewart’s meeting with Obama featured “a segment titled ‘It’s a Vlad, Vlad, Vlad, Vlad World,’ [where] Stewart giggled as he displayed a picture of the shirtless Russian leader — ‘Heil Titler,’ he joked. Then he showed a video of Vladimir Putin at the Winter Olympics in Sochi and wondered if he was ‘even paying attention at the Olympics? … Or did you consider the parade of nations a browsing opportunity?’”

Most of the time, Stewart’s sketches fall in line with traditional, liberal progressive ideology. He has criticized Israel, militaristic foreign policy, and blatant bigotry in the Republican party. He has also discussed climate change and the environment. Though Stewart has not shied away from discussing topics that paint Obama in a negative light, his secret meetings at the White House suggest the comic may be willing to buck party allegiance—but only insofar as he sufficiently shames Republicans and encompasses the images liberals prefer to harbor of themselves (this includes an occasional critique of the liberal president—to uphold principle, of course).

As Democratic Senator Claire McCaskill said, “’I’ll tell you, some Democrats are worried [about the show ending]…He’s done a great thing for us reminding young people why the Republican Party is out of step.”

Even John McCain, a notorious right-wing Republican, acknowledged Stewart’s influence. As Politico reported: “‘He talked to young people. Young people watch him. Young people vote,’ McCain said. “So I don’t think that there’s any doubt that with his comedy” — the senator smiled and held up two fingers like quotation marks as he said “comedy” — “that he had an effect on the workings of government.”

Stewart’s influence is not to be underestimated. Politico observed that “To engage privately with the president in his inner sanctum at two sensitive moments—previously unreported meetings that are listed in the White House visitor logs….speaks volumes about Stewart and his reach, which goes well beyond the million or so viewers who tune in to ‘The Daily Show’ on most weeknights.”

When the Obama administration decided to remove veterans with private insurance from the VA health care roll, Stewart performed a segment: “‘That can’t be right,’ he intoned. The White House scrapped the plan one day after his segment aired, and veterans’ advocates recall Stewart’s commentary being discussed during a West Wing meeting with senior aides including then-chief of staff Rahm Emanuel.”

Politico also credited Stewart with fueling the recent national conversation about the Confederate flag—a valid topical discussion of racism, though it failed to address deeper concerns about institutionalized prejudice.

While Stewart has criticized the president, top Obama aide David Axelrod framed the dissent as a positive contribution: “I can’t say that because Jon Stewart was unhappy policy changed. But I can say that he had forceful arguments, they were arguments that we knew would be heard and deserved to be answered,” he said.

While Stewart’s effective propaganda for the Obama administration has never been a full-fledged endorsement of everything the president does (and often provides a necessary counter-narrative to the White House press machine), it is still an example of widespread political manipulation of the media. For decades, the CIA has infiltrated journalistic organizations through Operation Mockingbird. Currently, it is no secret that the president has waged a war on journalism and the free circulation of information, from his prosecution of whistleblowersto Former Attorney General Eric Holder’s surveillance of AP phone calls—among other transgressions.

Though the Daily Show can hardly be considered news, Stewart reaches millions of Americans and influences the highest echelons of political power. Many young Americans rely on this form of “infotainment” for knowledge as they reject “mainstream” news (nevermind that Comedy Central is owned by Viacom, one of six major media conglomerates).

While Obama’s recently revealed relationship with Jon Stewart may be an indictment of both Obama and Stewart’s integrity, it is but a single example the power of the media’s abilities to manipulate and direct public opinion.

Carey Wedler joined Anti-Media as an independent journalist in September of 2014. Her topics of interest include the police and warfare states, the Drug War, the relevance of history to current problems and solutions, and positive developments that drive humanity forward. Living at her place of birth, she currently resides in Los Angeles, California.Learn more about Wedler here!