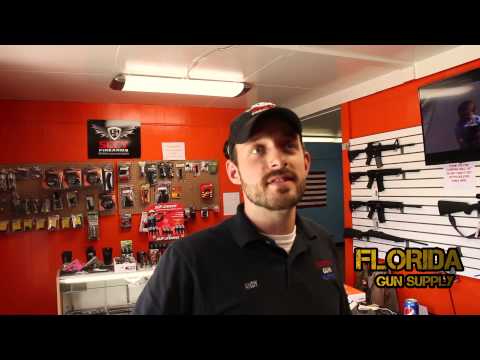 In the middle of July, Florida Gun Supply declared itself to be a “Muslim-Free Zone.” Now, the designated terror group and unindicted co-conspirator in the united States’ largest terror funding plot, the Council on American-Islamic Relations, has chosen to sue based on alleged discrimination.

The lawsuit filed in the U.S. District Court in Fort Lauderdale accuses Florida Gun Supply of Inverness of violating the federal public accommodations law and seeks an injunction to stop the discrimination, according to the complaint.

“We just can’t let segregation rear its ugly head in Florida again. This is part of Islamophobia that we need to challenge,” said Hassan Shibly, chief executive director of the civil rights group.

Andrew Hallinan, the gun shop’s 28-year-old owner, referred calls for comment to his lawyer, Robert Muise of the American Freedom Law Center. The law firm aggressively seeks to advance and defend the country’s Judeo-Christian heritage, according to its website.

Muise denied that the store had discriminated and called the lawsuit “absolutely bogus.”

Hallinan announced proudly before a Confederate flag, “The shooting range is also now open to the (non-Muslim) public for free. Due to the latest attack by an Islamic Extremist in Tennessee, we’ve made some extreme changes to the way we are impacting our community. Watch the video to see our 3 new changes that will make America a safer place to live.”

And though CAIR wanted to use bullying tactics with the help of the Muslim-endorsed Obama Justice Department, Hallinan doubled-down on his comments, citing the same (unconstitutional) regulations of the federal government that Jan Morgan did when she declared her place of a business, The Gun Cave Indoor Shooting Range, a “Muslim-free zone.”

Here were her reasons:

The Koran (which I have read and studied thoroughly) and (which all muslims align themselves with), contains 109 verses commanding hate, murder and terror against all human beings who refuse to submit or convert to Islam. Read those verses of violence here.

My life has been threatened repeatedly by muslims in response to my publication of those verses from their Koran. Why would I want to rent or sell a gun and hand ammunition to someone who aligns himself with a religion that commands him to kill me?

The barbaric act of beheading an innocent American in Oklahoma by a muslim
* the Boston bombings(by muslims)
* the Foot Hood mass shooting (by a muslim) that killed 13 people and injured over 30 people
* and the murder of 3000 innocent people (by muslims) on 9/11
This is more than enough loss of life on my home soil at the hands of muslims to substantiate my position that muslims can and may follow the directives in their Koran and kill here at home.

Two muslims walked in to my range last week with allah akbar ring tone and message alert tones on their smart phones. They spoke very little english, one did not have proof of U.S. citizenship, yet they wanted to rent and shoot guns.
Their behavior was so strange, it was unnerving to my patrons. No one would enter the range to shoot while they were there. Some of my customers left.
(can you blame them?)

I have a federal firearms licence (sic)… The ATF informed us when we received the license that if we feel any reason for concern about selling someone a firearm, even sense that something is not right about an individual, or if we are concerned about that persons (sic) mental state, even if they pass a background check, we do not have to sell that person a gun.

In other words, a federal agency has given us this kind of discretion for service based on the nature of the business. I can and have turned people away if I sense an issue with their mental state.

On the issue of religious discrimination:
I view Islam as a theocracy, not a religion. Islam is the union of political, legal, and religious ideologies. In other words, law, religion and state are forged together to form what Muslims refer to as “The Nation of Islam.”
It is given the sovereign qualities of a nation with clerics in the governing body and Sharia law all in one. This is a Theocracy, not a religion.

The US Constitution does not protect a theocracy.
The 1st Amendment is very specific about protecting the rights of individuals from the government, as it concerns the practice of religions, not theocracies.
It clearly differentiates between government and religion. Again protecting the individual’s religious beliefs and practices from (the state) government.
In Islam religion and state are one.

We are a Nation governed by laws, the U.S. Constitution. We are not a Nation that is governed by religion, politicians or clerics.

How then can Islam be protected by the U.S. Constitution?

Islam allows Muslims to kill their own children, (honor killing) if the behavior of those children embarrasses or dishonors the family name. (which has already occurred on American soil)
Why would I allow people (whose religion allows them to murder their own children), be in the presence of other children?
My patrons often bring their kids to the range to teach them to shoot.
I am responsible for providing a safe environment for those children to learn gun safety and shooting sports.

In the 14 hundred year history of Islam, muslims have murdered over 270 million people.
Since 9/11 muslims have committed over 21 thousand deadly terror attacks world wide.

Morgan and Hallinan aren’t the only businesses that have established Muslim-free zones. Even Gun Owners of America, a pro-Second Amendment group, has deemed themselves as a Muslim-free zone.

Hallinan, being the good sport that he is, extended an invitation to Shibly to attend a gun course at his store on July 25. He also encouraged him to explain the Koran to him afterwards. Shibly, being the coward (like all Islamic jihadists are) cancelled the meeting. That right there should tell you all you need to know about Islam and those jihadists masquerading as though they are peaceful and American.

Clearly, this is not so much a Second Amendment issue as it is a First Amendment issue concerning the right to peacefully assemble, which by implication determines who we may assemble and provide services for. I stand by the decision of Morgan, Hallinan and GOA. How about you?