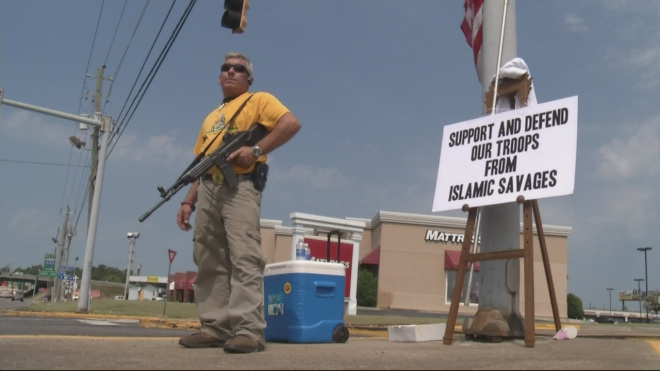 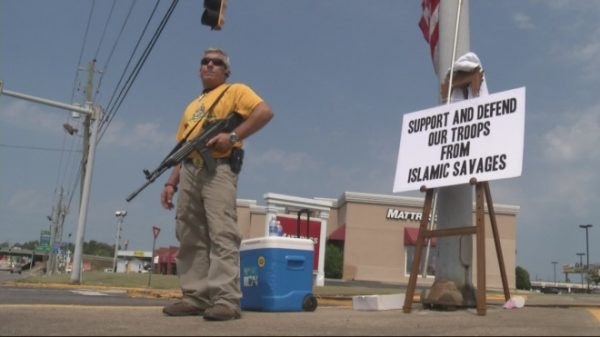 Muslims from the Islamic Society of Augusta consider the armed man, Jim Stachowiak, to be a threat to them, so they reported him to the FBI, then tried to get him into the mosque, in order to “re-educate” him with the usual Muslim lies and propaganda about Islam being a ‘religion of peace.’ Not surprisingly, Stachowiak was smart enough not take them up on their sinister ploy.

WJBF: Jim Stachowiak has made a promise to stand on Wrightsboro Road, near Augusta Mall, armed with his rifle and what some perceive as a negative message toward Muslims to protect military recruitment centers in the local shopping mall. This act comes after a man claiming he was Muslim killed Marines in Chattanooga, TN.

Mohammad Daoudi, the Imam for the Islamic center in Martinez, said they have reported Stachowiak to the FBI, putting him on watch. Daoudi says “He has a history of anti-Muslim slogans, bashing Muslims and Muslim faith and sometimes teasing the Muslim community by coming with his car [to the center] that already has a print against Islam,” he stated.

Imam Daoudi said he is serious about educating people about the Muslim faith. He says he invited Jim Stachowiak inside the mosque to talk with him about Islam. He says others are invited too.

Watch the video below.