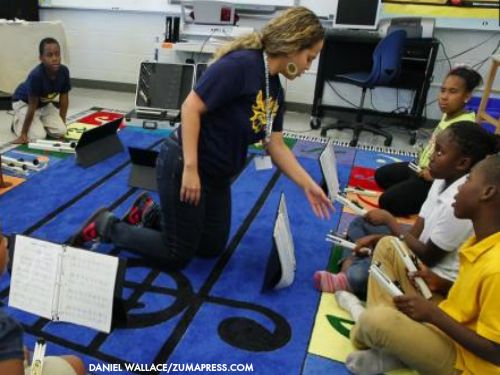 Perhaps I was just in a worse mood than usual today when I saw this and decided to write about it, but really, what in the hell is WRONG with PEOPLE???

Well, the Hillsborough County School Board voted 6-0 last week to suspend Florida music teacher Lindsay Blanc after she was accused of duct-taping a kindergartner’s eyes shut as punishment at Potter Elementary School.

Apparently this is just something Ms. Blanc, 29, somehow thinks is okay to do to little kids. The Tampa Police Department interviewed 19 children and some of them told the cops they too were duct-taped by Blanc as punishment according to the police report. Others witnessed her doing it or threatening to, holding a roll of duct tape and saying the kids better behave or they would “get this”. Ms. Blanc also reportedly liked to terrorize the children with threats that they would be taken away in a “white van” if they didn’t do as they were told.

“‘You get duct tape over your eyes and mouth if you are bad. The white van then picks you up and then you go to the office,’ a kindergartner told the officers when asked what happens to students who misbehave in Miss Blanc’s class,” the NY Daily News reported. Further, “An administrator told police she was called to the room to help with a misbehaving student but when she arrived at the doorway Blanc was preventing it from opening. The administrator then waited in the hallway to speak with the student.”

Even the principal reportedly had to warn Blanc to keep her hands off of the students.

One child was traumatized. Via the Tampa Bay Times:

The mother of the child whose eyes were duct-taped, Monica Vann, told the Tampa Bay Times that her son got in trouble on April 21 for talking during his music lesson.

He was sent to sit at the “peace table” for a time out, she said. But he kept turning around to watch a movie with the other children, and to punish him, Blanc taped his eyes. The district report says the children who witnessed this told a parent, who reported the incident to Carson the next day.

Carson called her supervisors and the district called in the Hillsborough County Sheriff’s Office child protective investigations unit, which verified a case of “bizarre punishment.”

“Bizarre punishment”??? If you did this to someone at child protective services, you would promptly be arrested and put in jail for assault.

Although the tape only irritated his skin, the mental scarring has proven worse for the boy. He has since been suffering from nightmares. He acts out. The mother feels it is because of what he went through and that her son needs counseling now. She’s hoping this school, which apparently failed to protect her child and countless others to begin with, will provide it.

Although this happened last spring, this woman Blanc was still up until a week ago earning her $42,000 salary (although she had been removed from the classroom and only working there in an administrative capacity after the incident reported above finally got out). Blanc worked at the school for four years. Who knows how many kids she was allowed to screw up in that time. The school board is just now moving on to the point of attempting to fire her.

The fact that we live in a country where child protective services can take a parent’s children away for letting them play in a park down the street by themselves because that is deemed abuse… And yet Ms. Blanc can walk away from this with zero criminal charges or even at the very least not getting immediately fired after a trail of abuse that obviously went on long enough to not only harm multiple kids, terrorize others, and for Ms. Blanc to receive warnings from the principal to stop which in actuality only allowed her disgusting behavior to continue still somehow manages to blow my mind even though I realize what our sad excuse for public schools in modern America really amount to these days… little more than indoctrination centers for an agenda-driven dumbing down and social engineering of the populace into compliant (and in some cases, terrified) sheep.

But dear Lord. These are still just five-year-old kids. This will no doubt scar them for a long time, if not for life. What kind of sick, disgusting, heinous, abominable, shameful, hideous, cold-hearted, cruel, repulsive, revolting, nasty excuse for a human being would do such a despicable thing?

Meanwhile, this story proves that Potter Elementary student mom Monica Vann is a much better person than I am. Because if this was my five-year-old son who had been harmed in this way, it would be very hard for me not to hunt down Ms. Blanc and duct-tape her eyes shut and throw her in a white van.