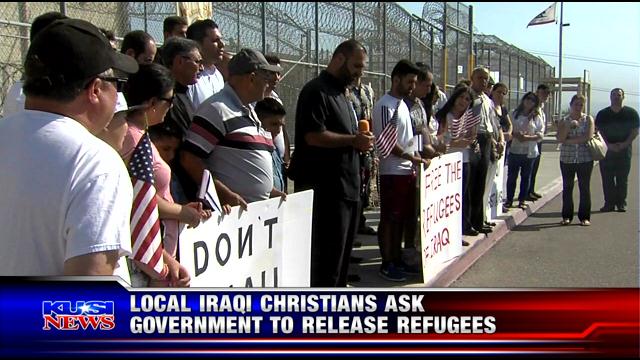 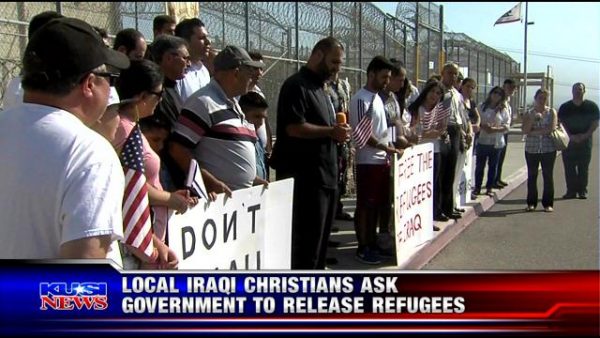 For the past six months, 27 Iraqi Christian asylum seekers fleeing the Islamic State (ISIS) have been locked up in an ICE detention center in Otay Mesa, CA, despite the fact that 20 of the 27 Chaldean Christians have American family members living in Southern California who are willing to sponsor them.

WND: Family members have been holding weekly vigils and rallies to draw attention to the detentions. Large U.S. Chaldean Catholic communities reside in San Diego and Detroit. The family members say they’ve been given few details on why they’ve been detained for so long, despite being refugees from Middle East terror.

“These aren’t people who just decided to cross the U.S.-Mexico border. These are people saying, ‘we have nowhere else to go,'” Mark Arabo, a spokesman for the Chaldean community, told the San Diego Union.

“It seems like the border is open to everyone unless you’re an Iraq Christian fleeing ISIS,” Arabo told Bill O’Reilly of Fox News Monday. “Obama is to blame, Congress is to blame, and the U.S. State Department is to blame.”

Lauren Mack, spokeswoman for Immigration and Customs Enforcement, confirmed that 27 Iraqi nationals are in custody, but she told the Union she couldn’t comment on individual immigration cases.

The extended detention of the Iraqi Christians represents a stark contrast from the way the wave of Central American women and children were treated when they massed at the border last summer. The overwhelming majority were detained for a matter of days or weeks, then released and given a hearing date to appear in immigration court.

Iraqi Chaldean Christians rally in support of 27 Chaldeans being held at an ICE detention center in California.

Former Republican Congressman Frank Wolf of Virginia, who now serves as a distinguished senior fellow at the 21st Century Wilberforce Initiative, which advocates for persecuted Christians worldwide, said the situation is a sad commentary on the state of U.S. priorities when it comes to asylum seekers.

“One can understand why they would leave their country when they are facing genocide,” Wolf told WND. “I have seen the area they came from (in Iraq).” It’s not a surprise that Christians being hunted down by ISIS would seek to leave and find refuge in a country like the U.S. where they have family ties and cultural ties, he said.

Wolf said there seems to be an “inherent bias” against Christians in the current administration. He said it’s clearly easier to get asylum in the U.S. as a Muslim than it is for a Christian, and it’s been that way for a number of years.

Wolf visited Iraq in January and was struck by the horrific conditions under which Christians are forced to live. “In January, we spent five days there and the conditions are brutal.”

Just last week, on July 30, Wolf sent a letter to president Obama and United Nations Secretary General Ban Ki-moon asking that they declare what is taking place in Iraq and Syria to be an official genocide. Wolf described the Iraqi Christian community, 1.5 million strong when the U.S. invaded Iraq in 2003, as “on the edge of extinction.”