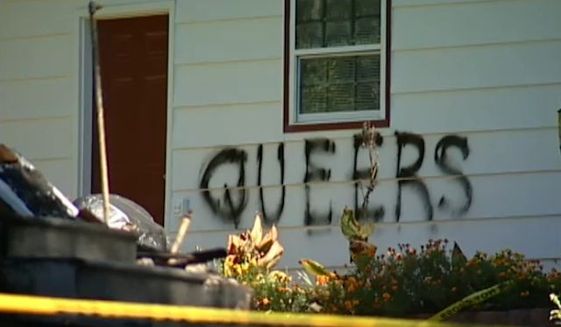 We have all had that neighbor, the person that you try to avoid, not wanting to have to speak to them. They are abrasive, or loud. They always need to borrow something from you, and you know that if you do not ask for it back, they will never return it to you. Well, what if your neighbor had threatened to burn your house down? One couple in Tennessee claimed this was the situation with their neighbor.

When their house caught on fire, they claimed that they had been threatened. The lesbian couple claimed that Janice Millsaps was responsible.

The Stuttes blamed neighbor Janice Millsaps in a lawsuit, accusing her of repeated threats to burn their house down. The lawsuit said that a month prior to the fire, Ms. Millsaps said to them: “Do you know what is better than one dead queer? Two dead queers.”

Now on the face of it, this accusation sounds like a horrid case of hate. One person, deciding that their neighbor’s lifestyle was abhorrent to them. And because of this, they decided that they hated this people. It is believable to most because it fits the “Homophobia” media narrative. Those who think that sodomy is a sin are haters, right? Well, not so fast.

A jury in U.S. District Court on Monday ruled in favor of American National Property and Casualty Company (ANPAC), which provided evidence that Carol Ann Stutte and Laura Jean Stutte torched their home in 2010 in Vonore and covered it up by spray-painting the word “queers” on a detached garage, the Knoxville News Sentinel reported.

ANPAC concluded after its own probe — which included a polygraph examination that Ms. Millsaps passed — that the Stuttes were indeed the arsonists, the Sentinel reported.

The Stuttes have not been charged in the house arson. The status of their lawsuit against Ms. Millsaps was not immediately clear, the paper said.

This couple went so far to pull off this hoax as to spray their own detached garage with the word “Queers.” They were so greedy and so full of animosity for their neighbor that they were willing to risk Ms. Millsaps going to prison for arson and a “hate crime.” It goes to show that though the media so loves to portray the sodomites as the victims, in reality they are the lawbreakers.

When we have people who love themselves and their desires above the law of God and the boundaries He has set for all of His Creation, they have no problem breaking any law. They identify as lawbreakers and take pride in their sinful actions. We should not be surprised when they have little or no regard for their fellow man.