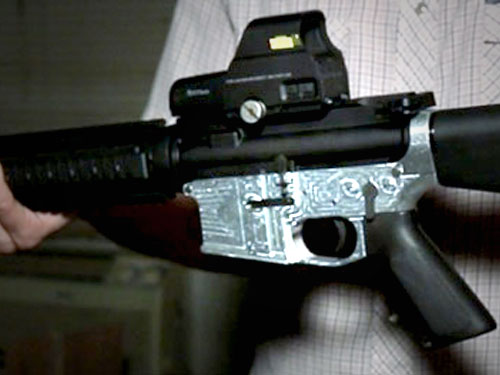 Governments hate legal loopholes, unless of course, those loopholes benefit themselves and their monied interests. In either case, they can’t stand it when the plebes find a way around their draconian laws. This especially applies to ghost guns, which if you’re not familiar, are untraceable firearm receivers that are shipped to your home as an almost finished product, thus skirting registration laws.

The control freaks in our society can’t stand the thought of any empowering object making it into the hands of an average citizen without it being tracked, stamped, and taxed. So when a young man in California murdered his college roommate with a ghost gun before turning the weapon on himself, it was no big surprise when the local media jumped on the case and focused in on the scary gun.

WALNUT CREEK — In the hours after police here came upon a grisly murder-suicide scene in the doorway of a suburban home last month — two college students who were once friends lay dead from gunshot wounds — the focus of their investigation immediately turned to the weapons.

Neither of the handguns Scott Bertics took with him on July 21 — the morning he shot 19-year-old Clare Orton, then himself — registered a serial number.

It didn’t take long for Walnut Creek police Lt. Lanny Edwards to figure out the reason: Bertics, a 21-year-old former Stanford engineering student, built the gun himself with parts that can mostly be purchased legally online.

“Honestly,” Edwards said, “until this case, I wasn’t real familiar with the topic. It’s not something we’ve seen.”

It may be unusual in Walnut Creek, but what Bertics did connects to a simmering issue nationwide: The potential dangers of hard-to-trace “ghost guns,” which might be assembled from purchased parts, fashioned with sophisticated machining tools or even created with a 3-D printer.

What’s especially interesting about this incident, is that even though this happened almost a month ago, the police still haven’t released the murderer’s mental or criminal history, or if it even applies in this case. Call it a hunch, but I’m willing to bet that this man had no record. The media is putting their focus on a gun that this engineering student built, because they don’t want to accept the fact that our system of background checks would have failed to stop this killer.

Still, you can almost hear the bell tolling for the ghost gun, and cases like this will certainly be used to scare the sheep into forfeiting their rights. Never mind the fact that ordering the parts and building this weapon would have taken longer than enduring California’s 10 day waiting period, or the fact that he could have just as easily built a rudimentary zip gun by sourcing parts from a hardware store. Those truisms will be lost on the bleating masses.

In fact, ghost guns were almost outlawed last year with little protest, when State Senator Kevin de Leόn proposed a bill that would have banned the sale and manufacture of these weapons in California. It made it all the way to the desk of Governor Jerry Brown, who promptly vetoed the bill. “I appreciate the author’s concern’s about gun violence” he said at the time “but I can’t see how adding a serial number to a homemade gun would significantly advance public safety.”

If not for the single unexpected vote of a liberal governor, this would have easily passed, despite its blatant stupidity (I mean, if they’re going to make a gun to commit a crime, why would the law stop them from making the gun?) With such widespread ignorance afoot, it’s only a matter of time before they (by they I mean the drooling masses and the people they elect) make it illegal for law-abiding citizens to manufacture these guns, even though criminals will still be able make them with a 3d printer, thus negating the whole purpose of the legislation. As per usual, these laws will fail to stop criminals, but will succeed in imprisoning otherwise lawful citizens.