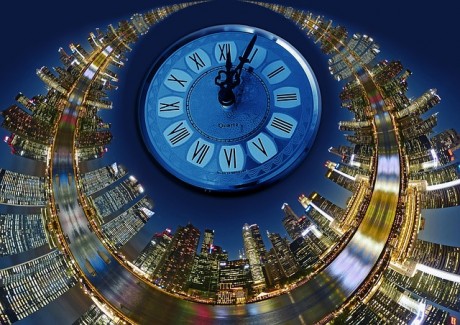 Did you see what just happened?  The devaluation of the yuan by China triggered the largest one day drop for that currency in the modern era.  This caused other global currencies to crash relative to the U.S. dollar, the price of oil hit a six year low, and stock markets all over the world were rattled.  The Dow fell 212 points on Tuesday, and Apple stock plummeted another 5 percent.  As we hurtle toward the absolutely critical months of September and October, the unraveling of the global financial system is beginning to accelerate.  At this point, it is not going to take very much to push us into a full-blown worldwide financial crisis.  The following are 12 signs that indicate that a global financial crash has become even more likely after the events of the past few days…

#1 The devaluation of the yuan on Tuesday took virtually the entire planet by surprise (and not in a good way).  The following comes from Reuters…

China’s 2 percent devaluation of the yuan on Tuesday pushed the U.S. dollar higher and hit Wall Street and other global equity markets as it raised fears of a new round of currency wars and fed worries about slowing Chinese economic growth.

#2 One of the big reasons why China devalued the yuan was to try to boost exports.  China’s exports declined 8.3 percent in July, and global trade overall is falling at a pace that we haven’t seen since the last recession.

#3 Now that the Chinese have devalued their currency, other nations that rely on exports are indicating that they might do the same thing.  If you scan the big financial news sites, it seems like the term “currency war” is now being bandied about quite a bit.

#4 This is the very first time that the 50 day moving average for the Dow has moved below the 200 day moving average in the last four years. This is known as a “death cross”, and it is a very troubling sign.  We are just about at the point where all of the most common technical signals that investors typically use to make investment decisions will be screaming “sell”.

#5 The price of oil just closed at a brand new six year low.  When the price of oil started to decline back in late 2014, a whole lot of people were proclaiming that this would be a good thing for the U.S. economy.  Now we can see just how wrong they were.

At this point, the price of oil has already fallen to a level that is going to be absolutely nightmarish for the global economy if it stays here.  Just consider what Jeff Gundlach had to say about this in December…

And back in December 2014, “Bond King” Jeff Gundlach had a serious warning for the world if oil prices got to $40 a barrel.

“I hope it does not go to $40,” Gundlach said in apresentation, “because then something is very, very wrong with the world, not just the economy. The geopolitical consequences could be — to put it bluntly — terrifying.”

#6 This week we learned that OPEC has been pumping more oil than we thought, and it is being projected that this could cause the price of oil to plunge into the 30s…

Increased pumping by OPEC as Chinese demand appears to be slackening could drive oil to the lowest prices since the peak of the financial crisis.

West Texas Intermediate crude futures skidded through the year’s lows and looked set to break into the $30s-per-barrel range after the Organization of the Petroleum Exporting Countries admitted to more pumping and China devalued its currency, sending ripples through global markets.

#7 In a recent article, I explained that the collapse in commodity prices that we are witnessing right now is eerily similar to what we witnessed just before the stock market crash of 2008.  On Tuesday, things got even worse for commodities as the price of copper closed at a brand new six year low.

#8 The South American debt crisis of 2015 continues to intensify.  Brazil’s government bonds have been downgraded to just one level above junk status, and the approval rating of Brazil’s president has fallen into the single digits.

#9 Just before the financial crisis of 2008, a surging U.S. dollar put an extraordinary amount of stress on emerging markets.  Now that is happening again.  Emerging market stocks just hit a brand new four year low on Tuesday thanks to the stunt that China just pulled.

#10 Things are not so great in the United States either.  The ratio of wholesale inventories to sales in the United States just hit the highest level since the last recession.  What that means is that there is a whole lot of stuff sitting in warehouses out there that is waiting to be sold in an economy that is rapidly slowing down.

#11 Speaking of slowing down, the growth of consumer spending in the United States has just plummeted to multi-year lows.

Things are lining up perfectly for a global financial crisis and a major recession beginning in the fall and winter of 2015.

But just because things look like they will happen a certain way does not necessarily mean that they will.  All it takes is a single “event” of some sort to change everything.

So what do you believe will happen in the months ahead?