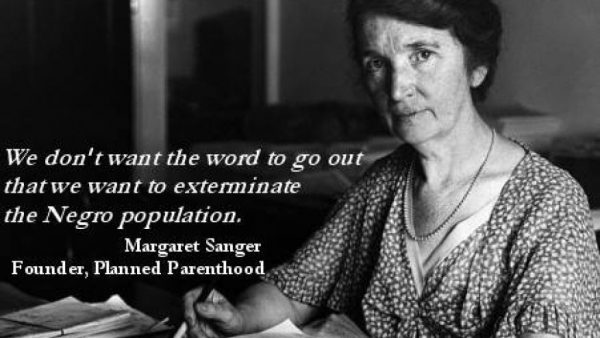 “She [Margaret Sanger, founder of Planned Parenthood] even presented at a Ku Klux Klan rally in 1926 in Silver Lake, N.J. She recounted this event in her autobiography: ‘I accepted an invitation to talk to the women’s branch of the Ku Klux Klan … I saw through the door dim figures parading with banners and illuminated crosses … I was escorted to the platform, was introduced, and began to speak … In the end, through simple illustrations I believed I had accomplished my purpose. A dozen invitations to speak to similar groups were proffered.’ (Margaret Sanger, ‘An Autobiography,’ Page 366).” — The Washington Times, “Margaret Sanger, racist eugenicist extraordinaire,” May 5, 2014, by Arina Grossu.

Here is a fuller version of that Sanger quote:

“Always to me any aroused group was a good group, and therefore I accepted an invitation to talk to the women’s branch of the Ku Klux Klan at Silver Lake, New Jersey, one of the weirdest experiences I had in lecturing. […] Never before had I looked into a sea of faces like these. I was sure that if I uttered one word, such as abortion, outside the usual vocabulary of these women they would go off into hysteria. And so my address that night had to be in the most elementary terms, as though I were trying to make children understand. In the end, through simple illustrations I believed I had accomplished my purpose. A dozen invitations to speak to similar groups were proffered. The conversation went on and on, and when we were finally through it was too late to return to New York.” (Sanger, Chapter 29, “While the Doctors Consult”, p. 366.)

“In a letter to Clarence Gable in 1939, Sanger wrote: ‘We do not want word to go out that we want to exterminate the Negro population, and the minister is the man who can straighten out that idea if it ever occurs to any of their more rebellious members.’ (Margaret Sanger commenting on the ‘Negro Project’ in a letter to Gamble, Dec. 10, 1939).”

“The Centers for Disease Control and Prevention’s Abortion Surveillance report revealed that between 2007 and 2010, nearly 36 percent of all abortions in the United States were performed on black children, even though black Americans make up only 13 percent of our population.”

Margaret Sanger was a leader in the American eugenics movement. Some have argued that her comments about wanting to exterminate the black population were misconstrued: Sanger was actually saying she didn’t want people to get the wrong idea and think she was advocating genocide. On the other hand, Sanger wrote, in her famous 1912 essay, “What Every Girl Should Know”:

“Birth control is not contraception indiscriminately and thoughtlessly practiced. It means the release and cultivation of the better racial elements in our society, and the gradual suppression, elimination and eventual extirpation of defective stocks—those human weeds which threaten the blooming of the finest flowers of American civilization.” (“Apostle of Birth Control Sees Cause Gaining Here”, The New York Times, 1923-04-08)

Here’s another quote from Sanger:

“…apply a stern and rigid policy of sterilization and segregation to that grade of population whose progeny is already tainted…to apportion farm lands and homesteads for these segregated persons where they would be…for the period of their entire lives.”–– Margaret Sanger, Birth Control Review, “A Plan for Peace”, April 1932, Vol 26, Number 4

And if that is not clear enough, Sanger wrote this:

“The main objects of the Population Congress would be […] (f) to give certain dysgenic groups in our population their choice of segregation or sterilization.” (“A Plan for Peace”, April 1932, pp. 107-108, summarizing an address to the New History Society, New York City, 1932-01-17)

Here is another Sanger quote, from her 1920 book, Women and the New Race—Chapter 5, “The Wickedness of Creating Large Families”:

“The most merciful thing that the large family does to one of its infant members is to kill it. The same factors which create the terrible infant mortality rate, and which swell the death rate of children between the ages of one and five, operate even more extensively to lower the health rate of the surviving members [in large families].”

Margaret Sanger was one of America’s leading proponents of eugenics. She favored sterilization and segregation, in order to prevent giving birth among those women she deemed unfit and defective.

Planned Parenthood, of course, chooses to downplay these aggressive views of its founder. The group also avoids mentioning that Sanger was strongly opposed to abortion, favoring the eugenicist birth-control methods I just mentioned.