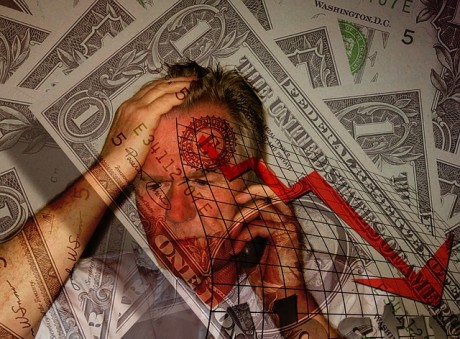 Things continue to line up in textbook fashion for a major financial crisis by the end of 2015.  This week, Wall Street has been buzzing about the first “death cross” that we have seen for the Dow since 2011.  When the 50-day moving average moves below the 200-day moving average, that is a very important psychological moment for the market.  And just like during the run up to the stock market crash of 2008, we are starting to witness lots of wild swings up and down.  The Dow was up more than 200 points on Monday, the Dow was down more than 200 points on Tuesday, and it took a nearly 700 point roundtrip on Wednesday.  This is exactly the type of behavior that we would expect to see during the weeks or months leading up to a crash.  As any good sailor will tell you, when the waters start getting very choppy that is not a good sign.  Of course what China is doing is certainly not helping matters.  On Wednesday, the Chinese devalued the yuan for a second day in a row, and many believe that a new “currency war” has now begun.

Does this mean that the time of financial “shaking” has now arrived?

The Dow Jones Industrial Average has been on an unrelenting upward trajectory since its October 2011 low.

But now a cross is happening in the other direction.  That is why it is called a “death cross”.  It is quite understandable why a lot of investors are freaking out about the fact that the 50-day moving average has moved below the 200-day moving average for the first time in four years.  Every major stock market crash in history has been preceded by a death cross.

Of course no indicator is perfect.  Sometimes these death crosses come just before market crashes, and other times nothing much seems to happen.  The following comes from MarketWatch…

And keep in mind that when the January 2008 death cross appeared, the Dow had lost just 7.8% from its Oct. 9, 2007 peak. That means the bull market was still firmly in place, as the rule of thumb is a bear market is defined by a decline of at least 20% from a significant peak. In addition, the 200-day moving average didn’t turn lower until two weeks after the death cross appeared.

But this is not the only indicator pointing to trouble ahead.  Even while we have many stocks hitting 52-week highs, we also have an extraordinary number hitting 52-week lows.  This is called a “split market”, and this is a very ominous sign.  In fact, according to Peter Boockvar 62 percent of all stocks on the New York Stock Exchange are already trading below their 200-day moving average…

Peter Boockvar, market strategist at Lindsey Group, said he believes the market is in a correction that began a few weeks ago, starting with commodities names getting hit. The small-cap Russell 2000 was also a leader of the declines. “The key is it’s infecting other areas of the market. You have every headwind and every reason to continue this correction,” he said.

“Going into today, 62 percent of the NYSE stocks were trading below the 200-day moving average,” said Boockvar. “More and more companies are dropping out of the bull market.”

At this point, we have already had more than 50 “split days” this year.  King World News has just released an article which has pointed out this has only happened four times before, and a major stock market crash has followed each occurrence…

After all four of those, stocks lost more than a third of their value at some point during the next two years.

Are you starting to see?

A stock market crash is coming.

Another thing that has investors concerned is the fact that we have seen a large divergence between high yield credit and stocks.  As Bloomberg has pointed out, when this happens a significant stock market decline follows more than 70 percent of the time…

While not without precedent, instances when anxiety in bonds didn’t seep into equities are rare. More than 70 percent of the time since 1996, as spreads widened as much as they have since April, the S&P 500 has fallen, with the average decline exceeding 10 percent, data compiled by Bloomberg show.

“This is something that sooner or later is going to impact the stock market,” said Russ Koesterich, global chief investment strategist at New York-based BlackRock Inc., which oversees $4.7 trillion. “Credit market conditions have not been benign and easy as where they were last summer.”

On top of everything else, it looks like a global currency war could be erupting.

According to USA Today, this desperate move by China to devalue the yuan may indicate that the Chinese economy is in far worse shape than most had thought…

One, China’s move suggests that its economy is in worst shape than believed. “It highlights the fragility of the global economy,” says Donald Luskin, chief investment officer at TrendMacro. Second, a weaker yuan means a stronger dollar, and a stronger dollar means U.S. products sold in China are more expensive, which means fewer sales of Apple iPhones, hotel rooms offered by Wynn Resorts and computer chips made by Micron Technology.

Lastly, there is a fear that other nations will respond to China by devaluing their own currencies to stay competitive.

“When people start talking about ‘currency wars,’ it’s never a good thing,” says Michael Farr, president of money-management firm Farr, Miller & Washington. “China’s move to devalue its currency could be the first shot across the bow towards a wider currency war.”

As I discussed yesterday, it seems like the phrase “currency war” has been thrown around a lot lately.

Well, former IMF economist Stephen Jen is suggesting that we could soon see major currencies all over the planet being devalued by up to 50 percent…

[The] devaluation of the yuan risks a new round of competitive easing that may send currencies from Brazil’s real to Indonesia’s rupiah tumbling by an average 30 percent to 50 percent in the next nine months, according to investor and former International Monetary Fund economist Stephen Jen.

Volatility measures were already signaling rising distress in emerging markets even before China’s shock move. An index of anticipated price swings climbed above a rich-world gauge at the end of July, reversing the trend seen for most of the past six months.

The surging U.S. dollar combined with crashing prices for commodity exports has already created a state of crisis in South America.  If emerging markets such as Brazil are forced to devalue their currencies to stay competitive with nations such as China, that is going to just exacerbate the problems.

For a long time, things in the financial world were pretty quiet.

But now events are beginning to accelerate.

A lot of people are extremely concerned about what is going to happen in September, and I think that there are very good reasons to be concerned.

Throughout our history, the majority of our stock market crashes have happened in the fall.  Just remember what happened in 1929, 1987 and 2008.

Now we are approaching that time of the year once again, and things are lining up perfectly for a major financial crisis.

So what do you personally think will happen?  Please feel free to join the discussion by posting a comment below…