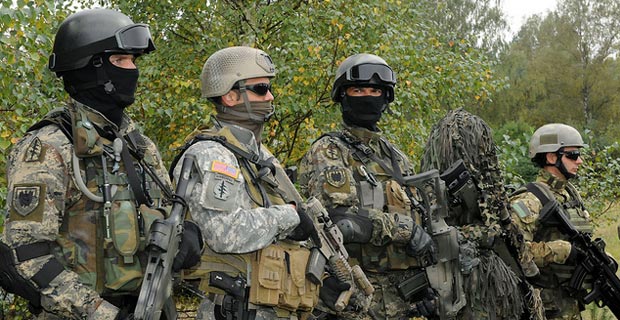 “Nobody suspected a thing”

U.S. Special Ops soldiers infiltrated and occupied a town in California using hay trucks and rental trucks, an admission that is sure to stoke concern amongst those wary of Jade Helm, an U.S. Army exercise that began last month amidst a whirlwind of controversy.

The revelation is contained within an article by the Desert Dispatch’s Mike Lamb about U.S. Army exercises taking place throughout the High Desert area near Barstow, CA which began last month.

U.S. Army sfc. Ryan Sabin, with the 10th Special Forces Group, related to Lamb and other journalists that the exercises would include “two or three soldiers blending in with people inside a restaurant.”

However, Sabin also revealed that preparation for the exercises had already been undertaken in the form of special forces soldiers infiltrating the town of Barstow, with nobody suspecting a thing.

The journalists were shown a Ryder rental truck full of furniture and a hay truck that looked normal from the outside but had been retrofitted on the inside. According to a Green Beret standing near the trucks, it was “mission accomplished,” special forces had used a number of the vehicles to surreptitiously occupy the town.

“I couldn’t count how many hay trucks,” the soldier said. “Everybody was either moving in or moving away. Nobody can suspect that (rental moving trucks).”

“He said the special operation soldiers drove down Barstow streets. And as far as he knows, nobody suspected a thing,” writes Lamb, with the soldier adding that the infiltration was “very successful….we did everything we wanted to do.”

“Even us reporters have a duty. And write we will, but now we’ll be just a little suspicious of rental moving trucks and hay trucks,” concludes Lamb.

The thought of special ops soldiers infiltrating and occupying an entire town with no one even noticing is sure to cause consternation amongst opponents of Jade Helm 15, an exercise currently taking place across the country which involves soldiers operating “undetected amongst civilian populations,” to see if they can infiltrate without being noticed.

Lamb refuses to say whether the “infiltration” or the subsequent exercises were part of Jade Helm, only that such such speculation will “sound off alarms among the….conspiracy followers,” although it seems to be incredibly likely that the drill was part of the nationwide exercise which ends next month.