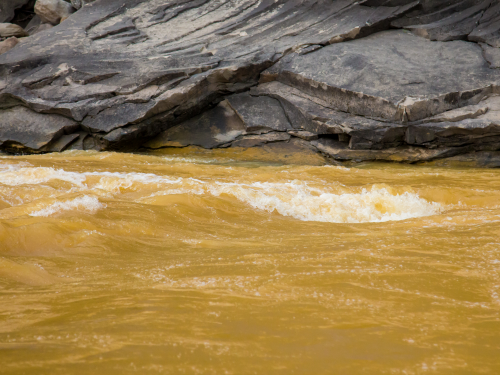 Ever since the EPA accidentally dumped 3 million gallons of toxic mine water into the Animas River, Colorado authorities have been keen on reopening the river for public use as soon as possible. The river is a significant source of tourist income in the region, and they don’t want the toxic spill to put a damper on their summer.

Governor John Hickenlooper is one of those authorities, and he’s determined to prove that everything is back to normal. So on Tuesday, after being given the challenge by the Durango Herald, he decided to take a big gulp of river water for the cameras. After 24 hours, he reported that he was still in perfect health.

However, that hardly proves that the river is safe, at least in the long-term. Granted, the EPA has tested the water and found that its toxicity has returned to pre-spill levels, but all of this is based on only a few days of water testing, which hardly enough time to draw a proper conclusion. Even the EPA admitted that during a recent public meeting between themselves and the Governor.

Speaking in Durango, Hickenlooper, a Democrat, said a preliminary analysis of water samples taken Friday from Cement Creek – after a plume of mustard-yellow mining wastewater crawled down the river – shows that the water has largely returned to pre-event levels. Concentrations of heavy metals and pH had returned to within normal ranges, confirmed Dr. Larry Wolk, executive director of the Colorado Department of Public Health and Environment.

But an official with the EPA asked Hickenlooper to stop making comments about the returning health of the river.

“It doesn’t show where we are at right now,” Shaun McGrath, Region 8 administrator for the EPA, told Hickenlooper, as officials huddled on the grass at Rotary Park. “You have to have a couple of days of data to show that you’re actually back to baseline conditions, and we’re not there yet.”

“That’s nonsense,” Hickenlooper responded, pointing out that businesses that rely on the river to drive operations are closed.

Just one day later, the EPA went so far as to call the water safe for consumption in Durango and La Plata County. Make of that of what you will. It’s probably true that this stretch of the river is now relatively safe, but that’s only temporary. In all likelihood, the toxicity of the whole Animas River will haunt the region for decades.

Ellen Wohl, a geoscience professor at Colorado State University told Business Insider she thinks the governor’s push to reopen the river doesn’t necessarily reflect the river’s health, but rather, pressure to get boating and other recreational activities going again on the river.

Even if the pH and heavy metal levels have returned to normal for now, she said, it doesn’t mean they won’t be a problem in the next few decades. The metals will stick around for a while, clinging to the silt and clay at the bottom of the river.

“There’s the potential every time we have a flood for quite a while now that this material could be eroded, and you could have spikes of heavy metal [levels],” Wohl said.

How much do you want to bet that this will all blow over after a few weeks, and for the next 10 or 20 years the authorities will ignore these “heavy metal spikes.” The state authorities won’t want to alarm residents and tourists, while the EPA will be too busy enjoying their SuperFund money to care. Honestly, you shouldn’t expect anything less when politics, bureaucracy, and money collide with the environment.