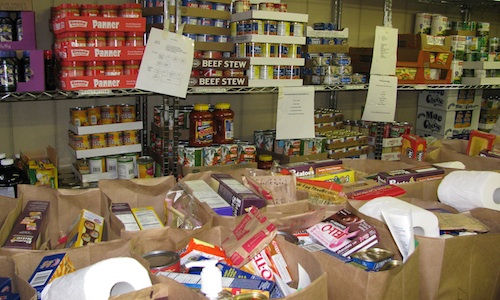 A few weeks ago a gentleman came to my office. He asked us if we would be willing to spare some warehouse space in our building. See, this Christian charity has to expand its food bank capabilities. Being that we have some empty warehouse space, we agreed to allow him to use it.

Then, by sheer coincidence, I see this from the AP: “Food banks struggle to meet surprising demand. Food banks across the country are seeing a rising demand for free groceries despite the growing economy, leading some charities to reduce the amount of food they offer each family.”

Did I read that right? “Despite the growing economy“–really? They had to add that, didn’t they? If the economy is growing, why then is there such an explosive need for food that, “U.S. food banks are expected to give away about 4 billion pounds of food this year, more than double the amount provided a decade ago, according to Feeding America, the nation’s primary food bank network.”

The fact is that since the collapse of the “Bush” economy in 2008, some 7 1/2 years ago, there has been a steady increase, every year, in the demand for food bank items. There’s your growing economy.

The largest food pantry in Albuquerque, New Mexico, has seen a 15% increase in demand this year and one in Gloucester, Massachusetts, “has given away 7.6% more food this summer than last.”

But neither the AP nor liberals in general can seem to figure out this phenomenon. “James’s Ziliak, who founded the Center for Poverty Research at the University of Kentucky, said the increased demand is surprising since the economy is growing and unemployment has dropped from 10% during the recession to 5.3% last month.”

Huh? I wonder—could it be the Obama employment numbers are phony? No, that could never be. Could it also be that these people are living in a bubble? Maybe if he left the university once in a while, he may see that there is no growing economy.

Yet, I can’t help but wonder if immigration has at least something to do with the surge in food bank expansion. After all, illegals gotta eat too!

According to the latest Census data, we now have a record 42.1 million illegal and legal immigrants living in America. Last year, “the total immigrant population surged 1.7 million,” and that growth, “was led in the last year by an additional 740,000 Mexican immigrants.” That’s 44% of the entire increase, so I’m sorry, but when Marco Rubio said during the debate that most illegals were not even from Mexico, he was simply wrong – or worse – not being honest. DHS even estimates that 8 out of 10 illegals are Mexican.

Okay wait—as an aside, how does the Census Bureau know all this? I thought illegals were hiding in the shadows. Remember: Even if we wanted to deport them all, how would we find them? Is that not the pro-illegal mantra? Well, now we can just ask the Census Bureau where they are.

Now, I’m all for feeding the poor, anyone who has temporarily fallen on hard times, and certainly those who can’t fend for themselves—but giving away food to those who shouldn’t be here just isn’t right. By giving illegals food from an already stretched-thin supply line, we are literally taking food out of the mouths of needy American citizens.

And that just isn’t right, and it shouldn’t happen.