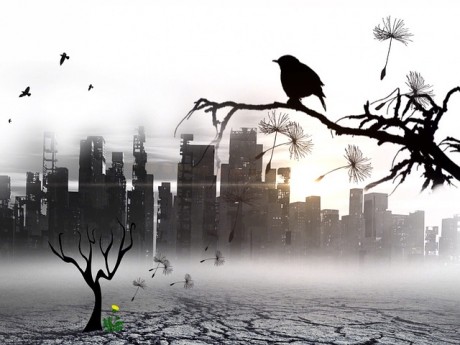 Once upon a time, it was popular to say that the U.S. government only had enough wheat stored up to provide everyone in America with half a loaf of bread.  But that is not true anymore.  Recently, I discovered that the U.S. does not have any strategic grain reserves left at all.  Zero.  Nada.  Zilch.  As you will see below, the USDA liquidated the remaining reserves back in 2008.  So if a major food crisis hit this country, our government would have nothing to give us.  Of course the federal government could always go out and try to buy or seize food to feed the population during a major emergency, but that wouldn’t actually increase the total amount of food that was available.  Instead, it would just give the government more power over who gets it.

The U.S. strategic grain reserve was initially created during the days of the Great Depression.  Back then, the wisdom of storing up food for hard times was self-evident.  Unfortunately, over time interest in this program faded, and at this point there is no strategic grain reserve in the United States at all.  The following comes from the Los Angeles Times…

The modern concept of a strategic grain reserve was first proposed in the 1930s by Wall Street legend Benjamin Graham. Graham’s idea hinged on the clever management of buffer stocks of grain to tame our daily bread’s tendencies toward boom and bust. When grain prices rose above a threshold, supplies could be increased by bringing reserves to the market — which, in turn, would dampen prices. And when the price of grain went into free-fall and farmers edged toward bankruptcy, the need to fill the depleted reserve would increase the demand for corn and wheat, which would prop up the price of grain.

Following Graham’s theory, President Franklin D. Roosevelt created a grain reserve that helped rally the price of wheat and saved American farms during the Depression. In the inflationary 1970s, the USDA revamped FDR’s program into the Farmer-Owned Grain Reserve, which encouraged farmers to store grain in government facilities by offering low-cost and even no-interest loans and reimbursement to cover the storage costs. But over the next quarter of a century the dogma of deregulated global markets came to dominate American politics, and the 1996 Freedom to Farm Act abolished our national system of holding grain in reserve.

As for all that wheat held in storage, it became part of the Bill Emerson Humanitarian Trust, a food bank and global charity under the authority of the secretary of Agriculture. The stores were gradually depleted until 2008, when the USDA decided to convert all of what was left into its dollar equivalent. And so the grain that once stabilized prices for farmers, bakers and American consumers ended up as a number on a spreadsheet in the Department of Agriculture.

Of course if there are no major national emergencies of any kind and life just continues on normally for decades to come, this will not be an issue.

But what if something does happen?

Right now, we are already witnessing all sorts of “mini food cataclysms”.  For instance, bees just continue to die in unprecedented numbers all over the globe.  During the most recent year, U.S. beekeepers lost approximately 40 percent of their colonies…

Widespread deaths among bees, known as Colony Collapse Disorder, were first reported about a decade ago, but the problem has not diminished and may have been especially bad recently.

Beekeepers across the United States lost roughly 40 percent of their colonies from April 2014 to April 2015, according to an annual survey conducted by the Bee Informed Partnership and Apiary Inspectors of America, with funding from the U.S. Department of Agriculture.

Another cataclysm is happening with bananas.  In fact, it is being reported that the specific type of banana that we eat right now is in danger of being wiped off the face of the globe…

Bananas are in big trouble. While the beloved fruit remains as popular as ever, its crops across the world have been hit with an infectious fungus and the damage is irreparable.

The Cavendish species of banana, which was introduced in 1965, is currently the primary banana export in the world. And it’s being completely ruined by Tropical Race 4, a fungal disease that began in Malaysia in 1990 and has since spread to Southeast Asia, Australia, and finally Africa in 2013.

Believe it or not, this is not the first time a fungus has wiped out an entire species of the bright yellow fruit. By 1965, the Gros Michel species of banana—which lasted longer, were more resilient, and didn’t require artificial ripening—was eradicated after what was called the Panama disease, a different strain of a similar fungal disease wiped out the world’s commercial banana plantations.

In addition, the recent bird flu epidemic was responsible for the deaths of 48 million turkeys and chickens.  This has driven egg prices through the roof…

U.S. egg prices continued their upward climb following the most devastating outbreak of bird flu in decades, according to a U.S. Department of Agriculture report this week.

Prices of large Grade A eggs delivered to store doors in the Midwest Regional area hit a range of $2.73 to $2.81 per dozen, the report showed.

Indianapolis Business Journal notes this is the most expensive eggs have been, according to data that stretches back to 2000.

More than 48 million birds have been affected since avian flu first was spotted in the U.S. in December.

And of course there are many, many more examples of significant problems that are hitting our food supply.  The following short list comes from one of my previous articles…

-More than 40 percent of our fresh produce comes from the state of California, but thanks to the worst multi-year drought in the history of the state much of the region is turning back into a desert.

-Also due to the persistent drought, the size of the U.S. cattle herd is now as small as it was during the 1950s, and the price of beef has doubled since the last recession.

-Over the past few years, something called “porcine epidemic diarrhea” has wiped out approximately 10 percent of the entire pig population in the United States.

-Just off the west coast of the United States, a wide variety of sea creatures are dying in unprecedented numbers.  For example, the sardine population along the west coast has dropped by a staggering 91 percent just since 2007.

-Down in Florida, citrus greening disease is absolutely crushing the citrus industry.  Crops just keep on getting smaller year after year.

Are you starting to see what I am talking about?

In many years, the world already eats more food than it produces.  We don’t have much room for error, and there are some countries that are already experiencing a full-blown food crisis.  The nation of Guatemala is one of them…

Nearly one million people in Guatemala are struggling to feed themselves as poor rainfall has led to drought and shrunken harvests, worsening hunger among the poor, the U.N. Food and Agriculture Organization (FAO) said.

“In Guatemala, 170,000 families, approximately 900,000 people, have no food reserves left. This is the third consecutive year they have been hit by drought,” Diego Recalde, head of FAO in Guatemala, told the Thomson Reuters Foundation.

In recent articles, I have also mentioned the growing food crisis in Venezuela.  Things have gotten so bad that soldiers dressed in riot gear are now policing supermarkets…

Soldiers with riot shields, tear gas canisters, and rifles patrol lines in Maracaibo, a major city in the northwest.

Scarcity is particularly acute here because smugglers — taking advantage of the leftist government’s policy of fixing prices on some goods — buy products to sell for profit in nearby Colombia.

“We have to maintain control otherwise there would be chaos,” said Lieutenant Carlos Barrera, 21, pushing back crowds at one supermarket.

As you read this, intense food shortages are also affecting Syria, the Soloman Islands, Yemen, Zimbabwe, and several nations in southern Africa.

Just because you may live in a “wealthy western nation” does not mean that this will not impact you someday as well.

In fact, a major study was just released that came to the conclusion that global “food shocks” are going to become much more common in the years ahead.  The following comes from the Guardian…

The likelihood of such a shock, where production of the world’s four major commodity crops – maize, soybean, wheat and rice – falls by 5-7%, is currently once-in-a-century. But such an event will occur every 30 years or more by 2040, according to the study by the UK-US Taskforce on Extreme Weather and Global Food System Resilience.

Such a shortfall in production could leave people in developing countries in “an almost untenable position”, with the US and the UK “very much exposed” to the resulting instability and conflict, said co-author Rob Bailey, research director for energy, environment and resources at Chatham House.

Sadly, I believe that things are going to turn out to be far worse than even that report is projecting.

I am convinced that we are moving into a time when increasing volcanic activity, shifting weather patterns, geopolitical instability and severe economic problems are going to create critical shortages of food all over the planet.

So what will you and your family do when those times arrive?  Please feel free to add to the discussion by posting a comment below…