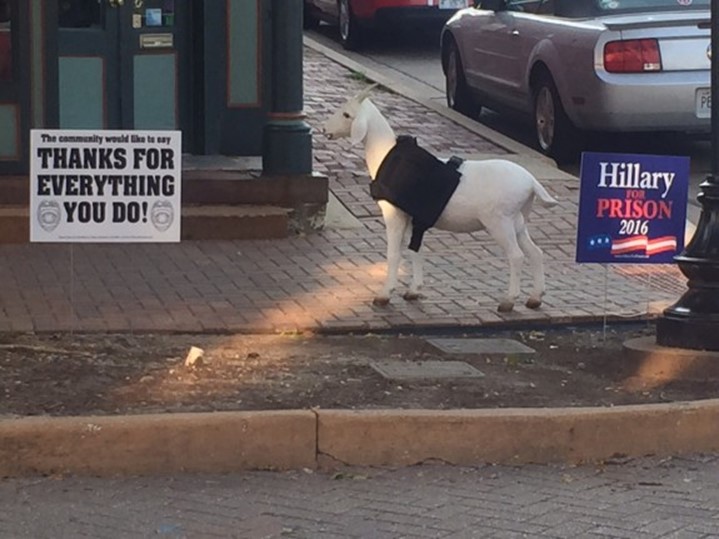 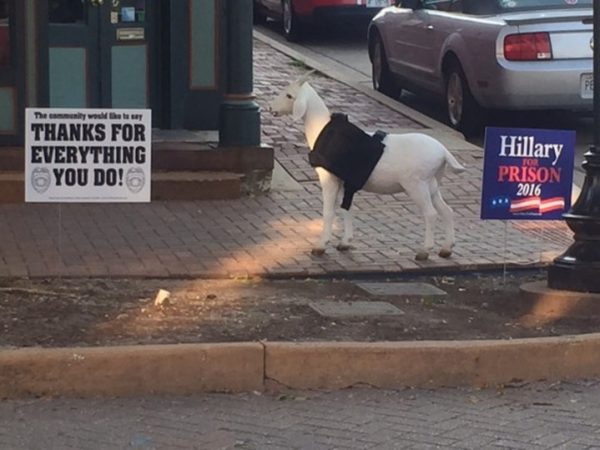 The American people who are paying attention can spot a criminal when they see one. They can spot the criminal administration of Barack Hussein Obama, which includes long time criminal Hillary Rodham Clinton. Now, instead of posting signs to promote the Hillary Clinton campaign in 2016, many are posting “Hillary for Prison 2016” instead.

Marinka Peschmann began selling Hillary 2016: Prison or POTUS bumper stickers in April. Now, “Hillary for Prison 2016” signs are popping up in the Show Me State (Missouri).

Here are a few of pictures of the signs displayed.

Not only has America been made of Bill and Hillary Clinton’s long record of criminal activities via the Clinton Chronicles, but their criminal behavior has been seen during their days in the White House, such as their selling technology to the Chinese without authorization and lies under oath, which got Bill impeached. It has also been reported that Bill engaged underage girls in sex and spent time with known pedophile and pimp of underage girls Jeffrey Epstein in the Caribbean.

As for Hillary, well, the list is long and undistinguished, but among her crimes is the current email scandal and failure to follow federal law concerning securing those emails, her deputy advisor Huma Abedin having ties to the Muslim Brotherhood, her foundation’s corruption, including ties to the Muslim Brotherhood and the lies about the Benghazi video, talking points, shredding of documents and emails.

Let’s not forget the way these two left office before George W. Bush stepped in. They left about $14,000 in damages to the White House, which the tax payers had to pick up the tab for. At least $4,850 of that was to replace keyboards with the ‘W’ missing. They glued desk drawers, left disparaging messages about Bush on signs and in telephone voice mail. There was the theft of a presidential seal from the Eisenhower Executive Office Building. Graffiti was sprayed on the men’s bathroom wall.

Are these the kind of childish, radical Marxists someone really wants in the White House… again? I’m not for prison for either of them. That would only cost the American people more money. I’m for justice. The crimes they are tied to in Clinton Chronicles, which Larry Nichols recounted, but has of lately confirmed he participated on their orders, is enough to seek the death penalty. Bill’s treasonous dealings with China is also worthy of death and, it seems that Hillary’s own ties to America’s enemies would warrant a death penalty for her.

Of course, once a verdict would be reached, it should be the people, in public, who carry out the sentence since they were the ones who had crimes committed against them. So, how about a sign that represents what true justice would be for Mrs. Clinton?