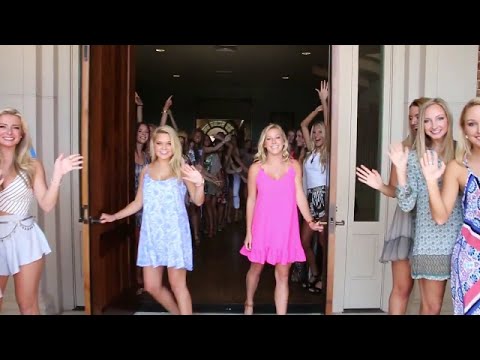 A University of Alabama sorority recruitment video was slammed as being “racially homogenous” and objectifying to women because it features a number of attractive, thin white girls.

The video shows a group of mostly white women partying and dancing to promote Alpha Phi, who are based at the Tuscaloosa campus.

However, the clip set off a firestorm of criticism, with AL.com writer A.L. Bailey asserting that the video was “worse for women than Donald Trump.”

“It’s all so racially and aesthetically homogeneous and forced, so hyper-feminine, so reductive and objectifying, so Stepford Wives: College Edition. It’s all so … unempowering,” writes Bailey, before she went on to argue that “beauty” and “sexuality” aren’t positive commodities.

“Some have condemned Bailey, the writer of the op-ed, for being a hypocrite as she runs a fashion and lifestyle blog,” reports the Daily Mail.

Others responded to the video in a more positive fashion.

“This is what I imagine heaven will look like,” wrote one.

“Can we all just calm down and give these ladies a break? I am ALL for empowering women but I am also ALL for fun. Let’s all be realistic here. When you are 18 years old and entering college, you are not only looking for the educational value but there is a social aspect as well,” wrote another respondent to Bailey’s article.

“You have a problem with white skinny girls with long hair? Like most people, I rather see this than a bunch of fat bald girls,” added another.

The clip was soon removed from YouTube after the backlash despite receiving over 500,000 views, but was later re-posted by other users.

One wonders if the reaction would have been less severe if the girls in the video had been a lot fatter and less attractive. Criticism of their behavior in that context may even have been labeled “fat shaming” by some of the very same people upset over this video.

As we have previously highlighted, radical feminists believe that men being attracted to thin, pretty fertile women is a conspiracy contrived by the beauty and cosmetics industry, when it’s actually scientific fact based on crucial factors like hip to waist ratio.

This has led to the growth of bizarre feminist offshoot movements like “fat acceptance,” which encourages even morbidly obese women to embrace “body positivity,” providing them with an excuse not to acknowledge that their lifestyle is incredibly harmful to their health.

Watch the videos below for further insights into why feminists hate attractive women and how this spawned the “fat pride” movement.