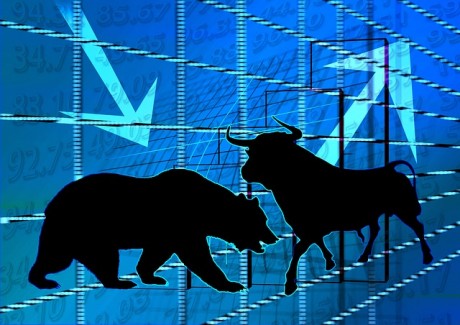 Yields on the riskiest junk bonds are absolutely soaring and the price of copper just hit a fresh six year low.  To most people, those pieces of financial news are meaningless.  But if you understand history, and you are aware of the patterns that immediately preceded previous stock market crashes, then you know how how huge both of those signs are.  During the summer of 2008, junk bond prices absolutely cratered as junk bond yields skyrocketed.  This was a very clear signal that financial markets were about to crash, and sure enough a couple of months later it happened.  Now the exact same thing is happening again.  The following comes from a Wall Street On Parade article that was posted on Tuesday entitled “Keep Your Eye on Junk Bonds: They’re Starting to Behave Like ‘08“…

According to data from Bloomberg, corporations have issued a stunning $9.3 trillion in bonds since the beginning of 2009. The major beneficiary of this debt binge has been the stock market rather than investment in modernizing the plant, equipment or new hires to make the company more competitive for the future. Bond proceeds frequently ended up buying back shares or boosting dividends, thus elevating the stock market on the back of heavier debt levels on corporate balance sheets.

Now, with commodity prices resuming their plunge and currency wars spreading, concerns of financial contagion are back in the markets and spreads on corporate bonds versus safer, more liquid instruments like U.S. Treasury notes, are widening in a fashion similar to the warning signs heading into the 2008 crash. The $2.2 trillion junk bond market (high-yield) as well as the investment grade market have seen spreads widen as outflows from Exchange Traded Funds (ETFs) and bond funds pick up steam.

And right now we are seeing the most volatility in the junkiest of the junk bonds.

The following comes from Wolf Richter, and my jaw just about dropped to the floor when I first saw this…

This chart of yields at the riskiest end of the junk bond market – bonds rated CCC and below – shows what happened. These bonds have been selling off over the past 12 months, with exception of the sucker rally earlier this year, and their yieldsmore than doubled from less than 7.9% in June a year ago to 16.2% by Thursday evening. And Thursday was a massacre: 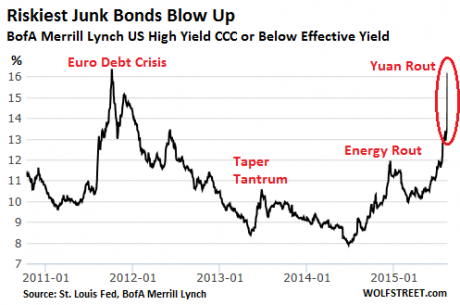 On Thursday, yields jumped 2.6 percentage points, from 13.58% to 16.18%, as these junk bonds plunged. Those kinds of single-day vertigo-inducing sell-offs are rare in normal times, and there haven’t been any since the Financial Crisis.

Amazingly, the Federal Reserve is actually thinking about raising interest rates in this environment.

Raising interest rates would just add fuel to the fire of this junk bond rout.  DoubleLine Capital’s co-founder Jeffrey Gundlach agrees with me…

“To raise interest rates when junk bonds are nearly at a four-year low is a bad idea,” Gundlach said in a telephone interview.

Gundlach, widely followed for his prescient investment calls, said if the Fed begins raising interest rates in September, “it opens the lid on Pandora’s Box of a tightening cycle.”

Gundlach said the selling pressure in copper and commodity prices driven by worries over China’s growth outlook “should be a huge concern. It is the second-biggest economy in the world.”

Meanwhile, as Gundlach mentioned, the price of copper continues to plunge.

On Tuesday, it set a brand new six year low.  It is now the lowest that it has been since the days of the last financial crisis.

And as you can see from this excerpt from a recent Investment Research Dynamics article, the price of copper started crashing before the stock market crash of 2008…

I wanted to keep this simple and just look at what is considered perhaps the best barometer of global economic activity:

In case you haven’t figured it out by now, the global financial system is in real trouble.

Another sign that rough waters are ahead is the fact that global shipping has fallen into a dramatic slump.  The following comes from the Telegraph…

World shipping has fallen into a deep slump over the late summer, dashing hopes of a quick recovery from the global trade recession earlier this year and heightening fears that the six-year economic expansion may be on its last legs.

Freight rates for container shipping from Asia to Europe fell by over 20pc in the second week of August, even though trade volumes should be picking up at this time of the year. The Shanghai Containerized Freight Index (SCFI) for routes to north European ports crashed by 23pc in five trading days.

Global economic activity is clearly slowing down, and there are 23 nations around the planet that are already experiencing stock market crashes.

The financial markets of the western world have not totally crashed just yet, but they are more leveraged and more vulnerable than ever.  The following comes from Zero Hedge…

As I explained during a recent interview with Kate Dalley of Fox News radio, what is coming should be obvious to anyone that is willing to look at the numbers honestly.

The global financial system is going to crash.

Yes, this crisis is going to take years to fully play out, but by the time it is all said and done it is going to be much worse than what we experienced back in 2008 and 2009.

So buckle up tight and hold on for your life, because we are in for one wild ride.