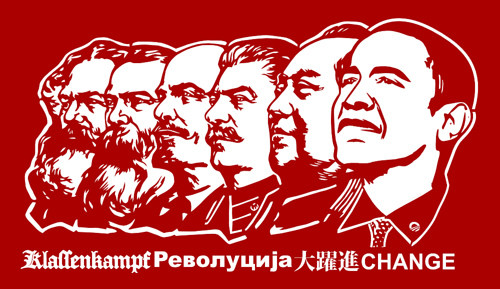 “Democratic” and “Democracy” come from the Greek roots demos (the people) and kratein (to rule). But today, it means something much different.

But just when did the Democratic Party begin its slide down the road toward the Socialist/Communist ideology? It really began around 1944, when the six-time Socialist Party candidate for President stated:

The 1960’s proved to be just what was ordered for the Socialists in the United States, and it was here that the New Left got its beginning. This new party idea did get as popular as they wanted until one certain radical seemed to alter their tactics so they would work well within a certain political party. This magical figure for the Socialists was Saul Alinsky, a very good friend of Presidential hopeful, Hillary Clinton. Saul Alinsky stated that to change a society, one had to first infiltrate the major institutions, the school, the media, the churches, the entertainment industries, the labor unions, and the three branches of government, and then it would have the power to implement policies.

It was in the 1972 elections that the Democratic Party, through the use of the old New Left, made the final move by effectively eliminating its opposition–the centrist liberals who had viciously opposed Communist totalitarianism. Once the Centrists in the Democratic Party were eliminated, the New Left took over the Democratic Party and incorporated the “liberalism” word it had destroyed through earlier elections. It was here that Socialism began its move into the depths of the Democratic Party, with Hillary Rodham Clinton actually writing letters to Saul Alinsky telling him how great his work was and that his ideas were working well.

It was during George W. Bush’s first term that the Democrats wanted Campaign Finance Reform—but the Democrats were not really interested in true reform, only in making sure they kept their biggest donors and keeping the Republican Party from doing the same. They did this by including a small provision called the 527 Organizations, which allowed ultra-radicals like themselves to give unlimited sums of money to only the Democrats. The 527 included one George Soros, who was one of the leaders of the “Shadow Party.” But it does not stop here; one of the groups inside the Shadow Party is none other than George Soros’s own, MoveOn.org. It was after John Kerry lost the 2004 election that these groups stated;

Today’s ruling Democratic Party faction, whose members include the so-called “Shadow Party” and its constituent elements, call themselves “progressive Democrats.” These Democrats themselves have a leftwing faction in the House of Representatives which is formally organized into the Progressive Caucus.

The word “progressive” has been replaced with “Liberal,” and Socialist Bernie Sanders was the founder of the Progressive Caucus. This should trouble people who love their freedom and liberties because the Socialists do not like either one and will lie and steal to remove both from the United States.

On December 8, 2009, former DNC Chairman Howard Dean said that “cooperation” between European socialists and the Democratic Party had “intensified significantly” over the preceding several years and involved “regular contact” at “Congress, Senate, party and foundation levels.” He added that “efforts have been remarkable from both sides.”

Howard Dean actually said that the Socialists are making significant gains in the Democratic Party, and that was in 2009, when the extreme Socialist Barack Obama was elected to office.

In April 2010, the official website of the Social Democrats USA (SDUSA) revealed that organization’s ties to the Democratic Party. Describing itself as a “Party Within a Party,” SDUSA stated the following:

“The Social Democrats, USA kept the name Socialist Party for our political arm because we are the party of Eugene Debs, Mother Jones, Helen Keller, Carl Sandburg, Norman Thomas, A. Philip Randolph, Bayard Rustin, and thousands of people who worked to build the civil rights and trade union movements in this country. Many good folks gave their lives in these movements.

“The Socialist Party, USA, in 1956, chose to stop running candidates of its own, except on rare occasion. During the 1960’s, we began to work in the Democratic Party. This is where our allies in the civil rights and trade union movement worked and continue to work politically. We are proud of what we helped accomplish within the Democratic Party, particularly the civil rights legislation and anti-poverty programs of the 1960’s. The struggle continues….

“Our movement has been involved in the left wing of the Democratic Party since 1947. Socialist Party members helped found Americans for Democratic Action. ADA is this country’s premiere “anti-Communist, liberal” organization. We are proud of our long relationships with Eleanor Roosevelt, Hubert Humphrey, and others. We look forward to forging a good working relationship with our fellow pro-labor, anti-totalitarian, left Democrats.”

This stands out as a defining moment in the history of the United States, as can be readily seen above: the Socialists, who have been trying to take over the United States since 1956 or earlier, have finally gotten what they have wanted to obtain–one specific party to hang their sordid coats on and use to ride the United States into the depressed valley of Socialism.

Late in 2010, Communist Party USA member C.J. Atkins called for his comrades to drop their “communist” label, so that they could work more effectively inside the Democratic Party. Soon thereafter, Joe Sims, co-editor of the CPUSA publication Peoples World, acknowledged not only that collaboration with the Democrats “will be an area of engagement for those wanting to make a difference,” but also that communists might someday be able to “capture” the Democratic Party entirely. Sims warned, however, against dissolving the CPUSA entirely into the Democratic Party. Rather, he advised his organization to remain a separate entity, working both inside and outside the Democratic Party as circumstances required.

“[B]ig Lawyers … and three other special interests — Big Labor union leaders, Big Green environmentalists, and Big Insiders with billions of dollars in personal wealth and foundation grants — together essentially dictate what Democrats can and cannot support on many key public policy issues…. These four groups provide most of the campaign funding and workers, political and policy expertise, legal and regulatory muscle, and strategic communications for the Democratic Party. Consequently, most Democrats are prisoners of a narrow agenda of constantly growing government budgets, regulation and taxing. have influenced the agenda of the Democratic Party and moved the party far to the left of mainstream America. These special interests have used the power of the purse to co-opt the agenda of the Democratic Party vis-a-vis campaign contributions and independent expenditures.”

Once again, other news reporters have seen this smoke screen, as illustrated above, but the Main Stream Media is aligned with both the Socialists and the Communists within the Democratic Party, and it refuses to allow this truth to be shown. The Democratic Party today is no better than the Democratic Party of the 1850’s that wished to keep slavery, and, later on, Jim Crow laws—both of which held not just blacks back, but all other poor people.

It may not surprise some to find out who organized the Shadow Party, but it will surely surprise many who think the names are wrong:

Here, the term “Shadow Party” is used specifically to refer to the network of non-profit activist groups organized by George Soros and others to mobilize resources — money, get-out-the-vote drives, campaign advertising, and policy initiatives — to advance Democratic Party agendas, elect Democratic candidates, and guide the Democratic Party ever-further towards the left. The Shadow Party in this sense was conceived and organized principally by Soros, Hillary Clinton, and Harold Ickes. Its efforts are amplified by, and coordinated with, key government unions and the activist groups associated with the Association of Community Organizations for Reform Now (ACORN). The key organizers of these groups are veterans of the Sixties left. (For a list of some of the Shadow Party’s major players, click here.)

And here are even more surprises:

The “Shadow Party” is a term originally devised by journalists to describe “527” political committees promoting Democratic Party agendas. It is here used more specifically to refer to the network of non-profit activist groups organized by George Soros and others to mobilize resources — money, get-out-the-vote drives, campaign advertising and policy iniatives — to elect Democratic candidates and guide the Democratic Party towards the left. The Internet fund-raising operation MoveOn.org is a key component. The Shadow Party in this sense was conceived and organized principally by Soros, Hillary Clinton and Harold Ickes. Its efforts are amplified by, and coordinated with, key government unions and the activist groups associated with the Association of Community Organizations for Reform Now (ACORN). The key organizers of these groups are veterans of the Sixties left. The individuals and organizations listed on this page are some of the major players, past and present, in the Shadow Party. For a comprehensive discussion of the Shadow Party, its constituent members, and its agendas and activities, click here.

We could go on and on showing all the connections between the Socialists, Communists, and all other “Shadow Party” members, but we will just end this here and hope you pass this on and let many others know that what Hillary Rodham Clinton really wants is not what the Constitution states. Above, you see that Hillary Rodham Clinton is directly involved with the “Shadow Party” and the other Socialists/Communists wishing to destroy our Constitution and way of life. People of the United States, it is time to take our nation back from these groups and let them know we don’t want our nation changed into their way at all!