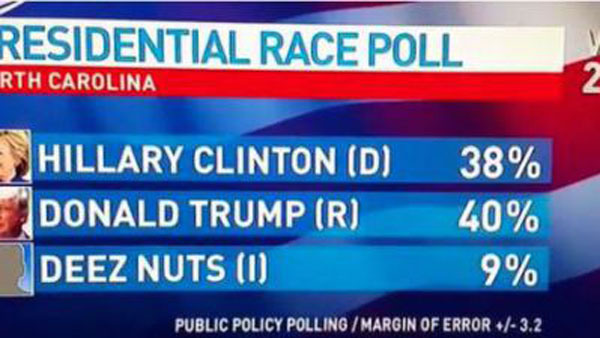 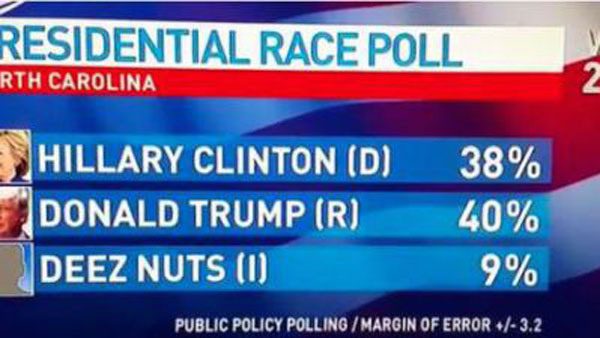 A new poll from North Carolina shows that Deez Nuts, an independent candidate from Iowa, is polling at 9%, placing him in a tie for third with Republican hopeful Marco Rubio. While Nuts still trails frontrunners Donald Trump and Hillary Clinton by a wide margin, the new poll suggests he is outpacing GOP candidates Carly Fiorina, Mike Huckabee, and Scott Walker, who received 6 percent each.

Deez Nuts does not actually exist, of course. However, Brady Olsen, the 15-year-old boy who filed the name with the FEC, is real — and nearly 1 out of 10 Tar Heel State voters would vote for his fictitious candidate over both Hillary Clinton and Donald Trump. Added to his recent 8% polling in Minnesota and 7% in Iowa, Deez Nuts is now “the most successful independent candidate for president in two decades,” according to The Guardian.

Another long-shot candidate, a five-year-old rescue cat named Limberbutt McCubbins, is running as a Democrat. Expanding on his future plans, Nuts expressed interest in tapping Limberbutt for VP:

“The next step is to get some party nominations, like the Minnesota Independence Party or the Modern Whig Party. It would also be great to find a VP, preferably McCubbins because the Nuts/McCubbins ticket sounds amazing.”

According to The Daily Beast, Deez Nuts recently offered up some policy as well, coming out in favor of a balanced budget and the Iran Deal.

Satirical candidates are nothing new to the political system. In fact, the candidate “Nobody” has actually run in every presidential election since 1964, when journalist Arthur Hoppe created the farcical character to lampoon the two-party system. Various comedians and activists have since taken up the cause, helping to buoy the subversive cultural meme to a respectable 100,000+ following on Facebook.

It is worth noting, however, that these previous satirical candidates never polled anywhere near 9%. Though it is still very early in the presidential campaign and Deez Nuts’ success is thus far relegated to three states, it’s hard not to conclude that this development reflects exponentially growing discontent with mainstream political candidates — and the 2016 presidential frontrunners, in particular. When a 15-year-old boy can manufacture a crudely named character that garners higher poll numbers than several career politicians, including a former two-term governor, one might concede that faith in elected officials — and perhaps representative democracy itself — is at an all-time low.

Jake Anderson joined Anti-Media as an independent journalist in April of 2015. His topics of interest include social justice, science, corporatocracy, and dystopian science fiction. He currently resides in Escondido, California. Learn more about the Anderson here!