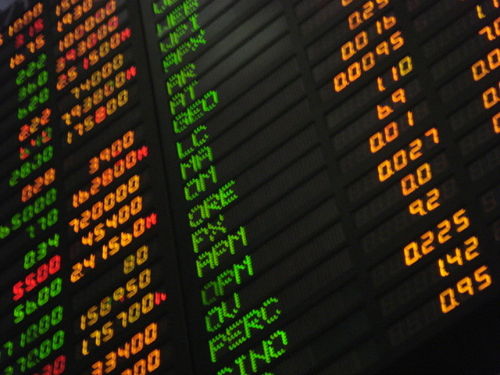 Editor’s Note: Josh wrote this article yesterday before the final bell sounded. I find it interesting that Wall Street took to desperate measures to try to stop the carnage and still couldn’t stop it from happening. As we all know by now, “Black Monday” happened anyway as the Dow fell by 588 points. -Dean Garrison

After taking several major hits on the stock market last week, Wall Street had every reason to believe that Monday would be a bloodbath. They’re currently doing everything in their power to prevent the panic selling that was expected to occur as soon as the stock market reopened.

The first thing that the New York Stock Exchange did today, was invoke the obscure “rule 48″ which is designed to stabilize volatile markets before they open. Rule 48 essentially suspends “the requirement that stock prices be announced at the market open.” The rule has existed since 2007, and has only been applied on two separate occasions. So far, this measure has only been moderately successful. Nasdaq immediately fell by 378 points on the opening bell, while the Dow fell by 1000 points. Both markets have recovered but are still fluctuating heavily.

But that’s not the only stop-gap measure being implemented. If the S&P 500 falls by 7% before 3:25 PM Eastern Time, then thousands of companies on the NY Stock Exchange and the Nasdaq will stop trading for 15 minutes. If the S&P 500 plunges by 20% at any point, the entire stock market will be shut down for the rest of the day. Much like a casino, when the house is losing, all bets are off.