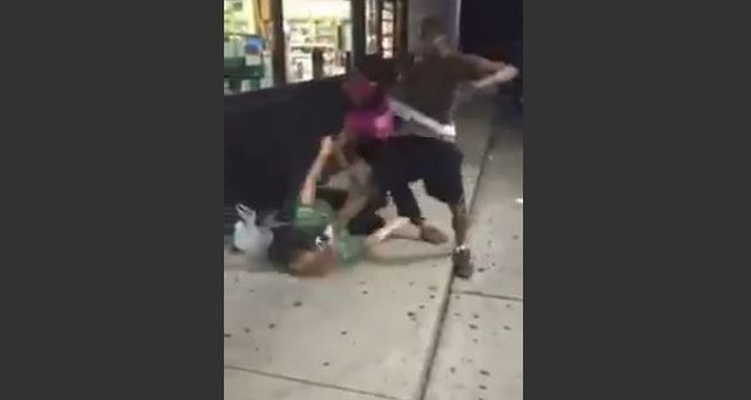 (INTELLIHUB) — A shocking video spreading through social media shows a couple attacking and beating a white woman outside a gas station in Milwaukee.

In the horrific video a white female is thrown to the ground by a black male as the woman with him repeatedly punches the victim in the head. The male then literally stomps the women’s head in while yelling, “wrong hood bitch.”

A Fox 6 news report on the attack purposefully fails to mention the race of the attackers while downplaying the fact that this is mostly a man beating the crap out of a woman while onlookers do nothing but laugh.

Sadly, the fact that a black man is literally on video beating a white woman with the help of his female accomplice has caused both the liberal media at large as well as numerous high traffic feminist websites to totally ignore this disgusting attack.

One would think that a caught on video attack of a helpless woman that includes a man stomping her head in would have the feminist side of the internet up in arms (and rightfully so) but so far popular feminist websites such as Salon, Raw Story’s Pandagon Blog, Jezebel, and Slate’s Double X section have totally ignored the horrific attack.

Scrolling through some of the ludicrous articles on these so-called feminist news outlets while trying to see if they have covered the attack paints a clear picture of what liberal third wave feminism is actually about. If it’s not a straight white male committing some micro aggression, it is not news in the feminist blogging world.

This censorship of the above video by the vast majority of liberal feminist news outlets shows once again the complete fraud that is third wave feminism. It also destroys what little credibility certain high-profile feminist “journalists” have left. (I’m talking to you Amanda Marcotte)

Another important fact that is literally never discussed in the mainstream media was detailed in a recent article by Infowars Steve Watson. Take note that the only reason these statistics are even being brought up is because the liberal media has literally attacked all white people as racists and painted a completely fabricated picture that white on black crime is running rampant throughout the country.

The latest racist assault comes in the wake of a series of disturbing attacks on white people by black attackers.

Recently released figures from the Bureau of Justice Statistics, discussed hereby National Review Online, illustrate how the already chronic problem of black on white violent crime is if anything getting worse.

The statistics, obtained via the National Crime Victimization Survey, show that a black person is 27 times more likely to attack a white person than vice versa.

Blacks are the attackers in 84.9% of incidents involving blacks and whites, the data shows.