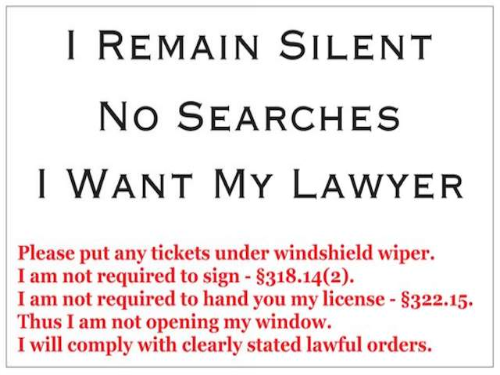 Earlier this year, Florida attorney and civil rights activist Warren Redlich created the “Fair DUI flyer” in response to the proliferation of unconstitutional police checkpoints across the United States. By holding the flyer up to your car window, along with your driver’s license and registration, you can quickly assert your rights and provide all of the information that you’re legally required to give to a police officer, without actually interacting with said officer. This prevents the police from using subjective excuses like smelling alcohol or hearing slurred speech to detain you. The flyer has since been used successfully by many other activists and concerned citizens.

However, some of the police departments in Florida don’t agree with Redlich’s interpretation of the law, and won’t recognize the flyer. This is despite the fact that Florida state law clearly requires you to “exhibit” your ID, and nothing more. The city of Coral Gables actually adopted a policy that would charge anyone who refuses to hand over their license with a misdemeanor. So after hearing about a DUI checkpoint in Coral Gables, Redlich decided to test his flyer in the city. Redlich was eventually arrested, after refusing to hand over his driver’s license to the police officers manning the checkpoint.

The police cited 322.15 of Florida’s statute for his arrest, even though that law is an infraction, not an arrestable offense. Three hours after the incident he was released and issued a citation for violating 322.15. He plans to file a lawsuit against the city of Coral Gables, though money isn’t what he’s after. “The goal is to get a federal judge to make sure that police follow the law, including 322.15 as well as Supreme Court cases on checkpoints.”