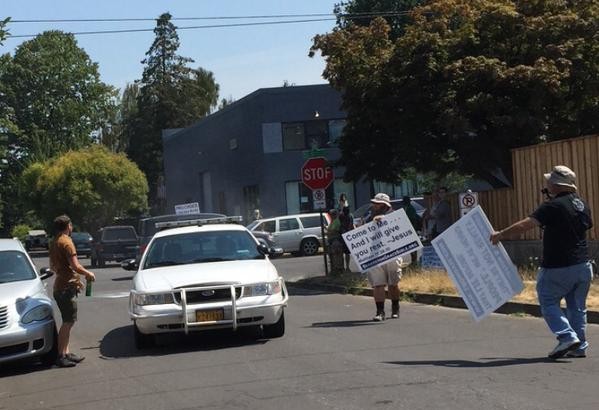 America is supposed to be a place where everyone is protected by the same rights. People have the right to speak out when they think that there is an injustice. These people, no matter what they are protesting or speaking against, are afforded the protection of the law. It is their right to voice their disdain for what they believe is unlawful and even tyrannical. We should all expect the freedom to speak about any subject and that right not be infringed either physically or through censorship. One would think that when this right is infringed by others, it would make the news. Well, you would be wrong.

At least six Christians were attacked with a cleansing agent on Wednesday while preaching the gospel and standing for life outside of a Planned Parenthood facility in Portland, Oregon, but the man who committed with the act was not arrested and was let go without charges.

The pro-life outreach was part of the Biblical Church Evangelism Conference hosted by Beaverton Grace Bible Church and organized by its pastor, Chuck O’Neal.

Now this attack occurred over two weeks ago, but not a peep from the mainstream media, not one word by those who claim to be the watchmen of our liberties. Fox, MSNBC, CNN, ABC, nor any other cable news show broke the story. Even with Planned Parenthood‘s almost daily attention, not a peep. And this was almost the same reaction the victims received from the police.

A police patrol vehicle was parked nearby as the incident took place, and former Los Angeles County Deputy Sheriff Tony Miano began calling to the officer to arrest the man. However, Miano and O’Neal state that the officer, Gene Gillock, rather protected the man shaking the cleanser on the Christians.

“As I’m shouting to him, ‘We want this man arrested,’ he’s telling us to stay back and not to disrupt what he’s doing, while he’s letting the assailant [be] who just assaulted six Christians with a white powder,” Miano explained. “He’s treating the guy who assaulted six of our friends as if they had been doing something wrong.”

As the man assaulted these peaceful protesters, the police officer acts like the Christians were the ones in the wrong; as if the Christians had done something to provoke the man and his outburst of anger. Officer Gillock then ignored the people doused in the harsh cleanser and turned his attention to the attacker; the officer escorting him home, as if he needed protection. And this leads to some further speculation about the event.

Miano further outlined that he believes that the outcome would have been much different had the perpetrator and victim roles been reversed.

“Can you imagine if we had thrown something on someone at Planned Parenthood?” he asked, noting that none in the group would ever do so. “We would be called American Jihadists; it would have been all over the news, … they would accuse us of wanting to kill abortionists [and] hating women. And Officer Gillock would have had us all on the ground in handcuffs, and we would have all gone to jail.”

Now, that would likely be all over every channel on a thirty-minute loop. Guaranteed!