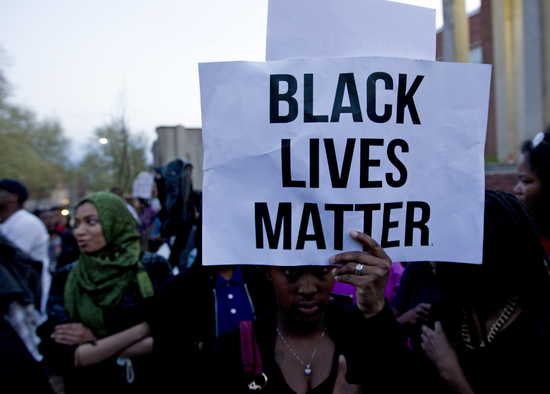 What started out as—in most people’s thoughts—a relatively harmless protest group, the Black Lives Matter (BLM) group has morphed into a full-blown black separatist hate movement. They have no shame and no fear in these United States, as they know the liberal press and spineless politicians don’t dare challenge.

They have but one arrow in their quiver as a defense for their radical behavior, but know that in this current climate, it’s all they need. No one wants to be labeled a racist. Yes, the race card is all they need to inoculate themselves from backlash – and with allies like the president, why even worry?

With every gathering–with every march—we see them growing ever bolder. The latest demonstration of this arrogant boldness was the march in St. Paul at the Minnesota fair, where they chanted, “Pigs in a Blanket – fry ’em like bacon.” They have no shame and no fear.

And this ramping up of hateful rhetoric directly coincides with the recent rash of police executions – white cops, and citizens (reporter and cameraman) being slain by angry black men.

There’s no way on earth these recent murders aren’t at least partly attributable to the well-advertised hatred of police by the BLM. I contend they are 100% to blame. Police officers get killed in the line of duty – but random assassinations of police like we’ve seen simply don’t occur in this country.

So, I believe it’s high time we classify the BLM as what they are, or have purposely grown into.

Despite the obvious–that one takes place internationally and the other within our borders–they both carry virtually the same definition:

Is this not exactly what BLM is doing? Are they not promoting violence and intimidation? Have they not affected the conduct of government? Just look at Baltimore and how the Mayor reacted to BLM violence – how she said they must be given the space to do whatever they wanted. Is this not the definition of terrorism? So why don’t we just call them what they are?

Now, it’s been discovered that the inspiration for the BLM movement is in fact on the FBI’s “Most Wanted Terrorists” list.

I’m normally not a fan of Infowars, but kudos to them for uncovering this.

“Black Lives Matter was founded by militant feminists Alicia Garza, Patrisse Cullors and Opel Tometi, with Garza widely recognized as the most influential of the three. In an article which details the philosophical foundation of Black Lives Matter, Garza cites, ‘Assata’s powerful demand in my organizing work.'”

Assata is a reference to Assata Shakur, otherwise known as Joanne Deborah Chesimard, a radical feminist and Marxist revolutionary who escaped from prison in 1979 while serving a life sentence for the murder of a New Jersey state trooper Warner Foerster.

On the night of May 2, 1973, Shakur, along with two other accomplices, killed Foerster, execution style, at point blank range during a routine traffic stop on the New Jersey Turnpike in East Brunswick.”

Wow! Does this sound familiar?

Evidently, she also joined the ultra-radical Black Panther party, but quit because they “weren’t violent enough.” Oh, and another little interesting factoid that was uncovered: after she left the milquetoast Black Panthers, she joined the Black Liberation Army, which just happened to be supported by none other than the Weather Underground. We remember the Weather Underground, whose leader was Bill Ayers, a friend of Barack Obama. Both Obama and Hillary Clinton have met, in private, with BLM.

Shakur, who has had at least 15 aliases that the FBI knows of, and a $2 million reward posted for her capture, is the first woman to appear on the FBI’s “Most Wanted Terrorist” list.

Now, I’m going to guess that most of the useful idiots who have been caught up in the BLM movement have no intention of being involved in a terrorist organization, but, know it or not, they are.

It’s my opinion that the radical leaders of this group mean to start a race war by continuing to ramp up the hatred of blacks toward whites. It’s doubtful they will be successful, but killing white police officers looks to be the first volley.

It’s time to classify BLM is a terrorist organization.