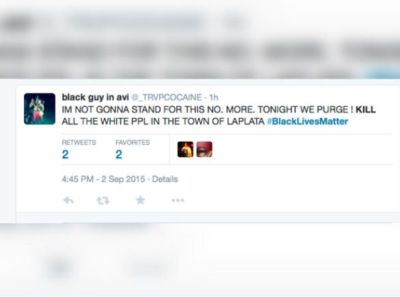 (INTELLIHUB) — In the last week the American people have seen what certain sections of the Black Lives Matter Movement actually support and it’s not anywhere close to the picture painted by the largely supportive mainstream media.

From calls by allies in the New Black Panther Party to creep up under the cover of darkness and murder cops, to numerous chants about pigs in a blanket at Black Lives Matter protests, any rational person who is not purposefully lying can see that at least segments of this movement are criminally violent.

Perhaps the most shocking statements from a BLM affiliated activist are those broadcast on the hate filled BlogTalkRadio show that has gone viral after a detailed report by Breitbart.com.

“Members of the #FYF911 or #FukYoFlag and #BlackLivesMatter movements called for the lynching and hanging of white people and cops. They encouraged others on a radio show Tuesday night to ‘turn the tide’ and kill white people and cops to send a message about the killing of black people in America,” reported Lana Shadwick.

“When those mother f**kers are by themselves, that’s when when we should start f***ing them up. Like they do us, when a bunch of them ni**ers takin’ one of us out, that’s how we should roll up,” said a caller of the show.

“Cause we already roll up in gangs anyway. There should be six or seven black mother f**ckers, see that white person, and then lynch their ass. Let’s turn the tables.”

While one would imagine that a mostly liberal media that has supported Black Lives Matter from the beginning would at least acknowledge how disgusting these calls for violence actually are, the opposite has happened with multiple articles claiming chants heard at BLM protests were “playful” and that reporting on calls for violence is merely a Fox News talking point.

One apologist article that stands out was published on Salon.com in a report that attacks a black activist who has spoken out against BLM. Remember, white liberals don’t actually care about the plight of African-American unless they are supporting their hard left ideals.

In the video, Whaley accused the movement of “encouraging black people to kill white people” — encouragement to which he attributed the murder of Officer Darren Goforth in Houston last Friday. That wasn’t the only Fox News talking point/marching order Whaley indulged in, as he also claimed that “black people can’t accept the truth about themselves,” and need to focus on the fact that “all lives matter.”

Given that Whaley’s video essentially repeated everything that Fox News’ white hosts and guests have been arguing for weeks now, it’s not surprising that Kelly’s producers booked him for an appearance. After all, there’s justsomething different about him that could lend their arguments the appearance of greater credibility. But back to the interview with Kelly, in which Whaley briefly recapitulated his/their argument before noting that the black community is even more complicit in its own destruction than Kelly assumed.

That’s right, according to Salon, talking about the calls for lynching cops and whites as heard in the video above isn’t journalism rather it is simply the talking point and “marching order” given by Fox News.

Think about that for a second. We have documented undebatable proof that portions of BLM are actively calling for the murder of all whites and cops and the liberal media is telling their sheep-like readers that it is merely a right-wing conspiracy and should be ignored.