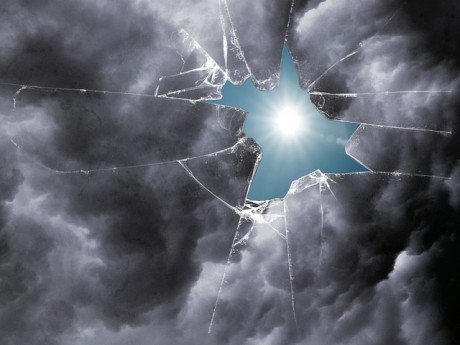 Those that watched their stocks steadily increase in value for years are now seeing all of that “wealth” disappear at a staggering pace.  The only way you actually make money in the stock market is if you get out in time, and many Americans are discovering that all or most of their gains have already been wiped out.  At this point, the Dow Jones Industrial Average has dipped below where it was at the end of the 2013 calendar year.  That means that nearly two years of gains have already been obliterated.  On Friday, the Dow was down another 272 points, and it is now down more than 2200 points from the peak of the market back in May.  For months, I have been detailing how things were setting up for this kind of financial crash in textbook fashion, and now events are playing out just as I warned.  But this is just the beginning – what is coming next is going to shock the world.

We have already seen the 8th largest and 10th largest single day stock market crashes in all of U.S. history happen within the past few weeks.  In fact, it was actually the very first time that we have ever seen the Dow fall by more than 500 points on consecutive trading days.

On August 25th, I warned that there would be some huge rebound days where we would see lots of “panic buying”, and on August 26th we witnessed the 3rd largest single day stock market increase in all of U.S. history.

In this article, I explained that this is exactly the type of market behavior that we expect to see during a full-blown market meltdown.  There are going to be even more violent swings in the market in the weeks ahead, but the general direction will be down.

Friday was definitely another down day.  The following is how Zero Hedge summarized the carnage…

I wish I could tell you that things are going to get better, but I can’t do that.  There are some giant financial bubbles that are starting to unwind, and this process is going to take time to fully unfold.

And this is truly a global phenomenon.  Chinese stocks have been crashing horribly, Japanese stocks just had their worst week in over a year, Canada and much of South America are plunging into recession, and Europe is probably in worse shape than everyone else if you look at the fundamentals.

Even though U.S. stocks have already fallen substantially, the truth is that they easily have much farther to fall.  Yale economics professor Robert Shiller believes that we could actually soon see the Dow plunge all the way to 11,000…

In what amounts to an ominous message for Wall Street, Robert Shiller, a Yale economics professor and author ofIrrational Exuberance, doled out some serious bear talk this morning.

Shiller told CNBC Thursday morning that “this is a dangerous time” for the stock market.

Shiller, who has a reputation for calling market tops, warned that the Dow Jones industrial average, which closed Wednesday at 16,351, could fall as low as 11,000, a potential drop of more than 30% from current levels.

At the moment, the Dow is sitting just above 16,000, which is an exceedingly important psychological level.

If the Dow breaks below 16,000 and stays there for a few days, it is quite likely that full-blown panic will set in.

And once we see the Dow dip below 15,000, people will be going insane.

Another key indicator to watch is the VIX (the CBOE Volatility Index).  If you are not familiar with the VIX, here is  a pretty good definition from Investopedia…

The ticker symbol for the Chicago Board Options Exchange (CBOE) Volatility Index, which shows the market’s expectation of 30-day volatility. It is constructed using the implied volatilities of a wide range of S&P 500 index options. This volatility is meant to be forward looking and is calculated from both calls and puts. The VIX is a widely used measure of market risk and is often referred to as the “investor fear gauge.”

Unfortunately, most people are going to have that “deer in the headlights” look because they will not understand what is happening and they will be frozen by fear.

Stay tuned to this website and to End Of The American Dream because things are about to get very weird and I will do my best to explain them as the coming weeks and months play out.

So what do you think the rest of September will bring?