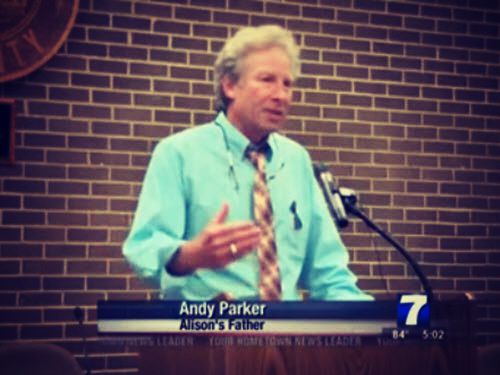 Alison Parker’s father Andy has announced he is dropping out of the race for the Henry County Board of Supervisors to focus all of his attention on his new “bigger mission” — gun control.

“I lost my daughter. And I’m not going to lose this fight,” Parker said. “We just want to keep guns out of the hands of crazy people. When I take on something, I go at it with a bulldog’s tenacity.”

“When we win this fight, that’s going to be her legacy,” Parker said. “She’s got a legacy now as a great journalist and, you know, she was a rock star and a force of nature. But her legacy is going to be when we win meaningful, common sense gun control.”

Some people say it’s too soon for Parker to launch a campaign for gun control legislation, but he disagrees. Parker is channeling his emotion into action, he said. This is the way that he chooses to grieve.

“We have a rain barrel in our yard and I am sure that I have cried enough tears to fill that rain barrel up — and then some,” Parker said. “But I’m not the kind of guy that is just going to sit around and just have grief consume me.” (source)

Citing Sandy Hook, the Aurora shooting, and the Gabby Giffords shooting as what should have been “tipping points” for gun control, Parker says he has to believe “this is the one”:

On the flip side, he also claims to be pro-2nd Amendment and has said he will be probably be buying a gun now.