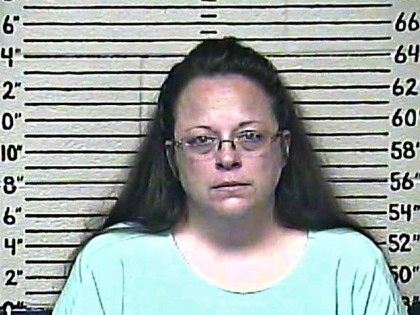 Now, we’re getting somewhere. The judge that ordered Kim Davis to be jailed for not breaking the law, but opposing his unlawful orders, is the same judge behind re-educating (indoctrinating) Kentucky student who opposed sodomy. That judge, a Bush appointee no less, was none other than US District Judge David Bunning.

In 2003, the communist American Civil Liberties Union (ACLU) sued the Boyd County Board of Education. The suit was to bully the Boyd County High School into allowing a “gay-straight” alliance club to meet. Parents overwhelmingly spoke out against the club, but to no avail. (Hint: Parents who love your kids, get them out of these indoctrination centers now!)

This group, the ACLU, is also the same organization that filed suit against Kim Davis.

Judge Bunning ordered the allowance of the sodomite-straight club on campus, despite the fact that he had no jurisdiction to do so.

He wrote in his ruling, “Absent a preliminary injunction, plaintiffs will be unable to meet at school, unable to benefit from a forum for discussion with other students who are suffering the effects of harassment based on sexual orientation, and unable to work with other students to foster tolerance among all students.”

But Bunning also required the school district to implement training as part of a settlement, which mandated school staff and students to undergo diversity education, “a significant portion of which would be devoted to issues of sexual orientation and gender harassment.”

However, a number of students objected to being forced to watch a video that asserted that it is wrong to oppose homosexuality and that a person’s sexuality cannot be changed. They discovered that they could not opt-out of the training without being penalized, and contacted the legal organization Alliance Defending Freedom (ADF) for assistance.

ADF then sued the Boyd County Board of Education over the matter on behalf of student Timothy Morrison and his parents, who said that the re-education requirement “effectively forces the students to speak in agreement with the school district’s view that homosexuality is a safe and healthy lifestyle that cannot be changed.”

But in 2006, Bunning again ruled that the students must watch the video and could not opt-out because of their Christian identity, stating that the education “rationally related to a legitimate educational goal, namely to maintain a safe environment.” He said that the training wouldn’t mean that students would have to change their religious beliefs, therefore, an opt-out was unnecessary.

Bunning then denied the students request who were refusing the training.

“Plaintiffs are not requesting that a student absent from the training be considered an ‘excused’ or that the Board offer an alternate assignment on the issue of diversity. Rather, they seek to opt-out of the training altogether,” Bunning wrote.

“Given the requirements of the consent decree, the Board cannot meet this demand. Moreover, as there is no burden on plaintiffs’ freedom of speech, free exercise or other constitutional right, there is simply no basis for an opt-out,” he added.

He then appealed to a First Circuit ruling, in which he noted, “If all parents had a fundamental constitutional right to dictate individually what the schools teach their children, the schools would be forced to cater a curriculum for each student whose parents had genuine moral disagreements with the school’s choice of subject matter.”

That, my friends, is statism, plain and simple. But, of course, the schools can push any depravity, historical revisionism and even religion they want to, so long as the state agrees that it is so.

Parents, the state does not own your children. They are a gift to you from God (Psalm 127-28). You are to teach them diligently (Deuteronomy 6), not the state. The more you send your children to state indoctrination, the more they will think like statists, and, like the communist Chinese, they will turn your children against you. I have already provided sources and means for you to begin educating your precious children on your own for free… and you can do it!

This judge’s previous ruling and the ruling against Mrs. Davis demonstrates that he should be impeached, charged and justice be brought down upon him… and if those who took the oath to uphold the law, namely Sheriff Jack Carter won’t carry out the enforcement of the law, then it is up to the people to carry it out. What will you do people of Rowan County Kentucky?