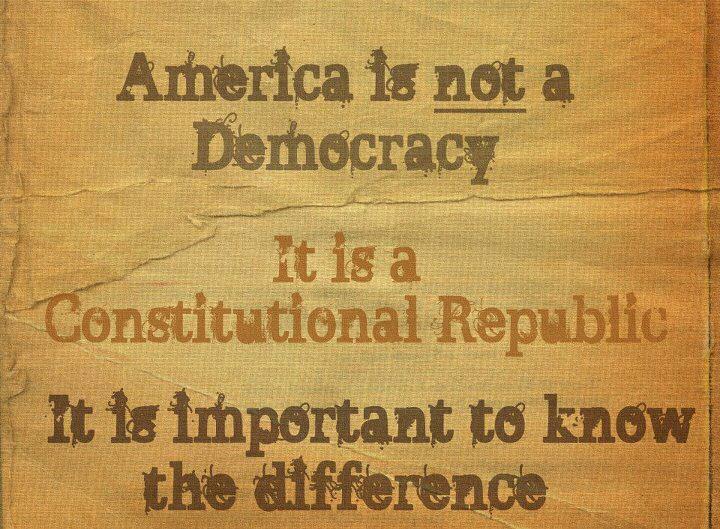 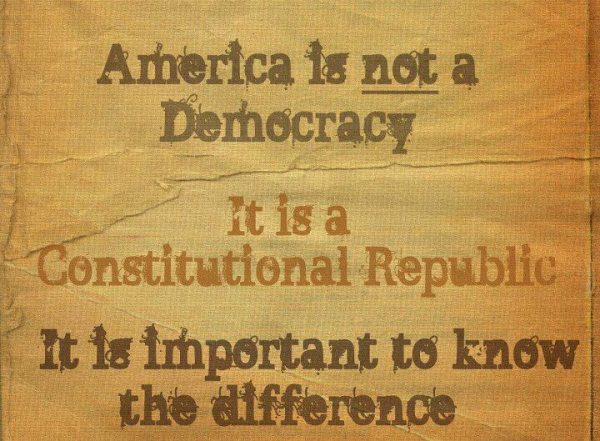 We learned it in school. America is a democracy, right? It’s stated as a fact in third grade social studies textbooks. Politicians give speeches about our great democracy. We hear it on TV, radio, in political debates, and from the White House. We even aspire to spread democracy around the world.

But is it true? Is our form of government a democracy? Say the pledge of allegiance. “I pledge allegiance to the flag of the United States of America, and to the Republic…” There’s that pesky word Republic. How did that word get in there?

Democracy or republic – what’s the difference? The two words mean the same thing, right? No. There’s a big difference between a democracy and a republic. The framers of our U.S. Constitution knew the difference very well.

Benjamin Franklin said, “Democracy is two wolves and a lamb voting on what to have for lunch.”

As James Madison stated, “Democracies are…as short in their lives as they have been violent in their deaths.” Or John Adams, “Democracy never lasts long. It soon wastes, exhausts, and murders itself. There never was a democracy yet that did not commit suicide.”

Throughout history, democracies have never lasted long. Once the people learned they could vote themselves money from the public treasury – or from their neighbor’s pocketbook – democracies ultimately created their own demise by establishing an incentive for the people to divide against one another.

Does this sound familiar? We find ourselves in America today, on the road to mass democracy. This was not the founder’s original intent.

Democracy, or rule by majority, eventually devolves into “tyranny of the masses” or “mob rule.” Historically, ancient Greece and Rome provided plenty of evidence of this violent tyranny. America’s founders wisely took note and avoided a direct democracy when contemplating what form of government they would establish.

So exactly what is a republic? It is a type government with two very important distinctions.

So, our republic is majority rule by the people through their chosen representatives, with adherence to the social contract, which protects the individual by recognizing and securing natural or inherent rights. It could be summed up by modifying Franklin’s description: “A republic is two wolves and a lamb voting on what’s for lunch, but with the stipulation that none of the three can be on the menu.”

This form of government has been duplicated in other countries, but failed because it lacked one important ingredient. America’s unprecedented success has depended entirely upon the moral character and the active involvement of the people to maintain our republic.

John Adams said, “Our Constitution was made only for a moral and religious people. It is wholly inadequate to the government of any other.”

In September of 1787, Benjamin Franklin emerged from Independence Hall in Philadelphia after signing the Constitution. Mrs. Elizabeth Powel greeted him and asked, “Dr. Franklin, what have you given us? A monarchy or a republic?” Franklin replied, “A republic madam, if you can keep it.”

So why do we continually hear that we live in a democracy? Why didn’t Mrs. Powel ask Franklin if the signers had given us a “democracy or a republic”?

It is important to understand that the founders and citizenry in early America used a very different language than the “politically correct” speech we hear today. Each word was chosen carefully and with precision in order to communicate accurately. Because of the unbearable tyranny they were experiencing at the time, it was necessary to be articulate, and deliberately speak the language of liberty.

Karen Lees is a Tennessee native; tracing her family lineage back to those who fought for our nation’s freedom in the Revolutionary War. A student of American history, Mrs. Lees actively supports citizen engagement in limiting the size and scope of central government, free market economics, and strict adherence to Divinely inspired Constitutional principles.