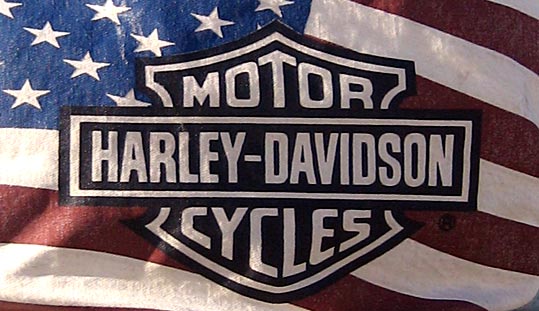 Harley-Davidson has been known as an American motorcycle company, but recently a DC area Harley-Davidson thought it would be a good idea to sponsor a rally for the Nation of Islam for black bikers on the 20th anniversary of Louis Farrakhan‘s “Million Man March.” Needless to say, they got an earful from true Americans and customers, or should we say “former customers”?

The Harley dealership, owned by Joyce and Thomas Moorehead, declares that the dealership will be a rally point for black bikers attending the event. This rally Louis Farrakhan has named “Ride for Justice.”

I can actually think a more proper name for the rally, given Farrakhan’s criminal speeches over the years, especially those of late. Just last week he called on 10,000 volunteers to murder white people and in June he called for the American flag to be pulled down! And yes, he’s free and having a biker rally while a woman upholds the law and is caged like an animal.

In any case, social media blew up against the Moorehead’s for being a part of the event.

“I wouldn’t be involved with anything or deal with a business that was not up and up and on board, so I think it’s just something that got out of hand with the internet,” said retired police officer Cornell Holdsten.

“You also got to understand that it’s getting close to the 2016 elections and there’s a lot of heat out there,” said Harley-Davidson rider Johnny Holmes. “There are a lot of upset people.”

However, Moorehead told WMC Action News 5 that they were merely allowing those who wanted to attend to use the facility as a meeting point to begin their journey, something that most Harley-Davidson dealers do. However, many can understand the outrage of allowing anyone who would attend a Louis Farrakhan or Nation of Islam event to meet up at their place of business knowingly to somehow also be endorsing the event.

Moorehead then issued a statement of clarification.

When we agreed to allow a group of bikers to use our dealership as a meet-up location prior to the Ride for Justice, as we allow numerous groups to do, it was in no way intended to imply Harley-Davidson of Washington DC sponsored or supports the cause that they represent.

Harley Davidson of Washington DC opposes all forms of racial, ethnic or religious prejudice, and we do not discriminate against individuals because of their political views, in theory and in practice, and will continue to do so.

We have withdrawn our consent for the bikers to meet here.

We are a small business, Harley-Davidson thru and thru. We are in business to sell and service Harleys and to provide a place for our employees to make a living to support their families.

This is called damage control. Moorehead claims that they do not “discriminate against individuals because of their political views, in theory and in practice, and will
continue to do so” and yet, in the next sentence says, “We have withdrawn our consent for the bikers to meet here.”

Now look, I’m fine with discrimination. I believe it is a right protected under the First Amendment, but this is a bit hypocritical to say you don’t discriminate and then withdraw consent for bikers to meet there based on the backlash of the event they were planning to attend, don’t you think?

In the meantime, a petition is being circulated that not only rejects the “Ride for Justice,” but also Louis Farrakhan, the Nation of Islam and calls for the Moorehead’s to be stripped of their Harley franchise.