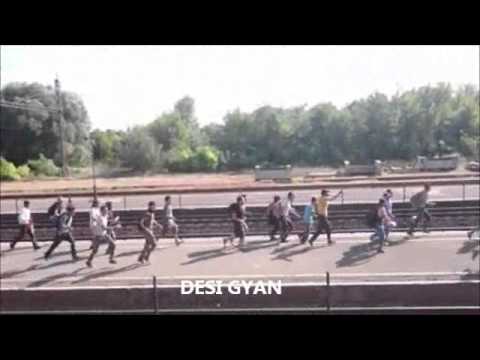 A new video shows marauding migrants running down the platform of a railway track in Hungary while throwing rocks at a nearby train and shouting “f**k you!”

While the media has portrayed arriving migrants as desperate families and kids in search of safety, the refugees in the clip are almost all young men – there appear to be very few families or children.

The clip shows the men quickening their pace as they approach the train before pelting it with stones and screaming profane insults.

As we reported earlier, another video shows migrants in Budapest chanting “Allahu Akbar” and “f**k you” as they engage in running battles with police.

Hungary has been lambasted by other European politicians for refusing to accept what they deem to be its fair share of migrants.

Hungary’s Prime Minister Viktor Orban has repeatedly insisted that his country has a right to protect its Christian traditions by not allowing huge numbers of Muslims to settle in the country.

“We shouldn’t forget that the people who are coming here grew up in a different religion and represent a completely different culture. Most are not Christian, but Muslim…. That is an important question, because Europe and European culture have Christian roots,” he wrote.

The New York Times quoted a legitimate Syrian migrant who complained that Pakistanis and others were discarding their IDs in an effort to fake Syrian citizenship and get preferential treatment.

“I am Syrian, you know,” said 28-year-old Taha Shaben. “A real Syrian. Here, we have Pakistanis, Afghans, Iraqis, and they all throw away their papers and claim to be Syrian….everyone is a Syrian now. It is a big problem.”