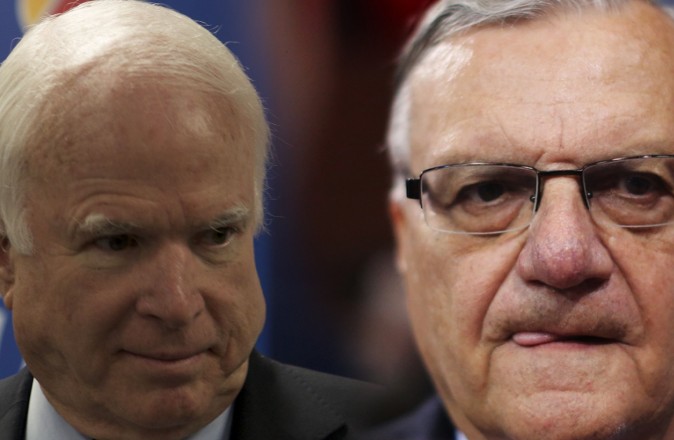 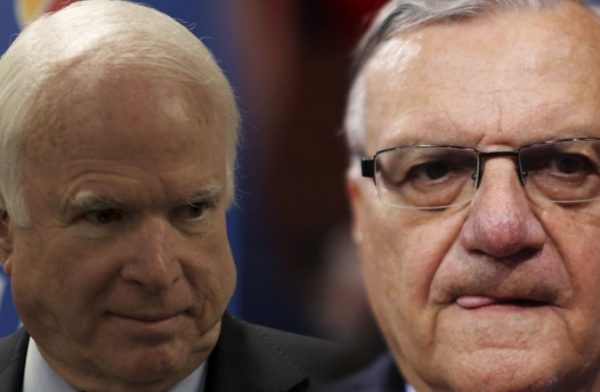 Operation Detain McCain occurred over the weekend, but Senator John “Songbird” McCain (R-AZ), being the coward and traitor that he is would not show up to address veterans’ concerns at his office. Instead, he engaged in a photo op several miles away, while our nation’s true heroes are homeless and suffering in the shadow of his office. But, that’s not all, Maricopa County Sheriff Joe Arpaio didn’t seem to want to be engaged in the matter either.

The Operation began last week and culminated on September 5th at John McCain’s office in Phoenix. The September 5th deadline was to have McCain come up with a solution for the veterans who are homeless in his area that he is ignoring. It included caring for the veterans in the area who are homeless and live within a short distance of McCain’s office, as well as a 22-mile walk to bring attention to the suicides of our nation’s veterans (22 per day) and point out the treason of Senator John McCain.

Organizer Pete Santilli, of the Pete Santilli Show, spoke with Freedom Outpost and gave us an update, which to be honest was shocking. I say “shocking” because it seemed that there was no major media coverage of the event. However, media did show up later and you’ll be surprised to find out why.

“We The People came up with this solution (Operation Detain McCain) and John McCain’s answer to our demands was barricades and police presence and restrictions for us going on the property,” Santilli said.

Keep in mind that McCain’s office is paid for by the taxpayers and yet, he does not want to hear from them or our veterans.

No one from McCain’s office showed to address the crowd, Santilli notified McCain by phone, letter and a visit to his office. However, McCain did preempt the event by going and feeding the homeless in Gilbert in front of cameras. He apparently didn’t think highly enough of the homeless veterans at his office. Clearly, it was a slap in the face of the veterans, but then that’s what “Songbird” does best, both in Vietnam and in supplying our enemies with money, training and weapons.

However, McCain’s office did respond to Pete Santilli via the state-controlled media. They simply referred to him as a “conspiracy theorist” as though that should address the concern Santilli has for his fellow veterans, who are homeless within 3 miles of his office.

Santilli brought evidence in hand, much of which we have documented here, that John McCain is guilty of treason (just as Barack Hussein Obama is) against the united States of America. He desired a constitutional sheriff who would take the documentation from him and allowed him to issue a citizen’s arrest against John McCain. Santilli chose Sheriff Joe Arpaio.

However, the bombshell that occurred during a conversation that Santilli heard from Sheriff Arpaio while in conversation with a contact of his. “She (Santilli’s contact) spoke to Sheriff Arpaio, I was standing right next to her and heard his voice. Sheriff Arpaio did not want to dispatch a sheriff’s deputy to the event because of the politics and the pressure he was getting from the feds.”

Arpaio has the goods on Barack Obama for sure. His investigation has been impeccable, but GOP leaders just don’t care enough to bring about justice. However, we’ve even questioned whether Arpaio has gone far enough, and the latest move by the feds in his office have definitely shown pressure.

However, Phoenix Police Department was highly praised by Santilli for protecting their rights of free speech, even going so far as to escort him into a building which he was formerly kicked out of to discover whether or not John McCain was in the building.

So, where were the media in all of this? Well they weren’t at the event, but they did show up one time. Santilli went to the Maricopa County Sheriff’s Office to meet with deputies and hand them the evidence he had on McCain. See the video below at around the 2:36:30 mark:

A citizen’s arrest report was filed with the Maricopa County Sheriff’s Office (report #15-022724). Santilli says that his oath, as a United States Marine is being upheld while Sheriff Joe’s oath is not for political reasons.

Mr. Santilli also said that on Sunday evening, before the Sheriff’s deputies arrived, FOX News showed up. Santilli believes that they were tipped off that he was going to the Sheriff’s office to engage in civil disobedience and they wanted to get the arrest on video. More and more, FOX is demonstrating they are controlled opposition. But the question that one must ask is, who tipped them off? It wasn’t Santilli or his people. Was it Sheriff Joe? One has to question that seeing the lack of involvement from his office.

Santilli and others gathered in a camp of veterans and brought in supplies to help them while they were in Arizona. He said that he learned “a tremendous amount” by working with the veterans there. Santilli, a Marine veteran himself, said that there is “chronic homelessness.” Some of this stems from some of the things our veterans have been subjected to and he confesses that society just won’t really be able to do anything about, and with some of those, Santilli believes there is a “certain amount of freedom that comes with that.”

However, there are good things that came from Operation Detain McCain.

Mr. Santilli did say that some veterans are “self-medicating,” which he described as drinking alcohol, rather than going into a corrupt, bureaucratic system that doesn’t treat them with dignity and respect.

Santilli also said that a left wing group has put together something that purports to help veterans, but of the money flowing into the organization, only a small portion of that is used to help veterans. “The conditions are horrible and they treat the veterans like scum,” he said. “And the veterans know it.” But they have nowhere else to go.

The hope is that this will be a longtime process to help veterans detox and to eventually get a permanent facility to help provide shelter for these veterans and hopefully to give back to them what so many of them have sacrificed to provide Americans. Business owners and individuals are contributing time, money and supplies in an effort to help these veterans. May God bless them for their efforts!

Maricopa County Sheriff’s Office have not returned our phone calls.