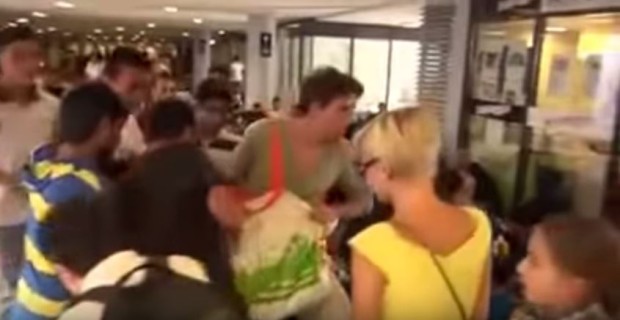 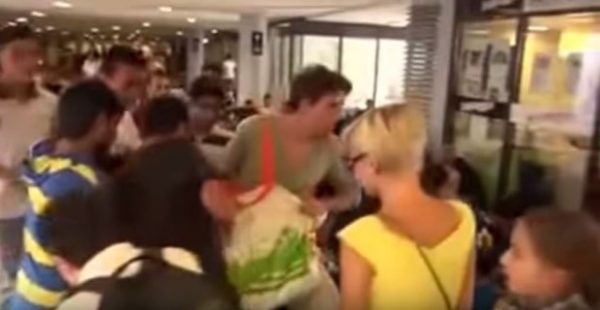 A video shot inside Budapest train station shows a gang of refugees robbing a charitable Hungarian man who is attempting to hand out free gifts to the migrants.

The clip shows a young man with a bag full of items handing them out to women sat on the floor of the station.

However, he is immediately surrounded by a group of teenage migrants and children who attempt to steal the items and rip the bag from his arms.

The Hungarian man attempts to walk away but is dragged back and is eventually forced to hand over the bag. He leaves the scene with his hands held up in a gesture of submission.

As we reported earlier this week, an old lady on the border of Italy and Austria was assaulted by a gang of migrants and pulled out of her car by her hair. The migrants said they were stealing the vehicle in order to try and reach Germany.

Refugees also threw feces at innocent bystanders, while in Hungary a group of migrants were filmed pelting a train with rocks.

Another video shows refugees in Hungary refusing to take water being handed out by police and throwing bottles onto nearby train tracks.

Another clip shows African migrants at a camp in Italy complaining about small puddles of water in tents before clashing with riot police.

Migrants have also been filmed chanting “Allahu Akbar” and “fuck you” as they engage in running battles with police.

The fact that many of the “refugees” are not even Syrian and are in fact economic migrants, coupled with their behavior, is giving the legitimate refugees a bad name.