This isn’t meant to be another one of those scary September 2015 stories, but we can’t just completely ignore history either.

Yesterday wasn’t just the 14th anniversary of the September 11, 2001 attacks. It also happened to be the last day of trading on Wall Street before this Shemitah cycle — a seven-year period on the Jewish calendar — ends on Sunday.

Look at how the end of each Shemitah cycle has played out in the past (via The Times of India): 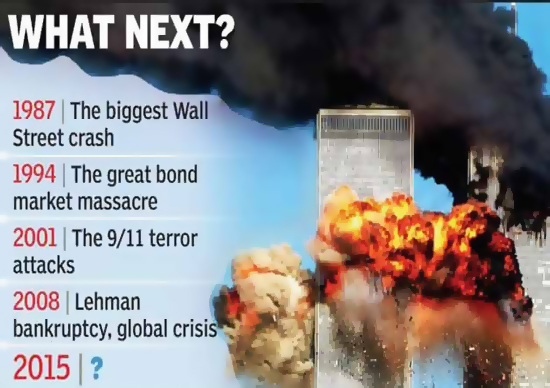 See what I mean? Some immense financial disaster has occurred after each Shemitah has ended in recent history.

Not featured on that graphic are 1980 and 1973. In 1980, the Savings and Loan crisis was going on and the Fed raised interest rates (which they are currently discussing doing right now actually) and we ended up in a really deep recession. Ten days after Shemitah ended in 1973, the Yom Kippur War started which resulted in the 1973 oil crisis.

Think about it. It’s kind of like a totally manipulated, self-fulfilling prophecy, isn’t it?

So… What do you think will happen this time?