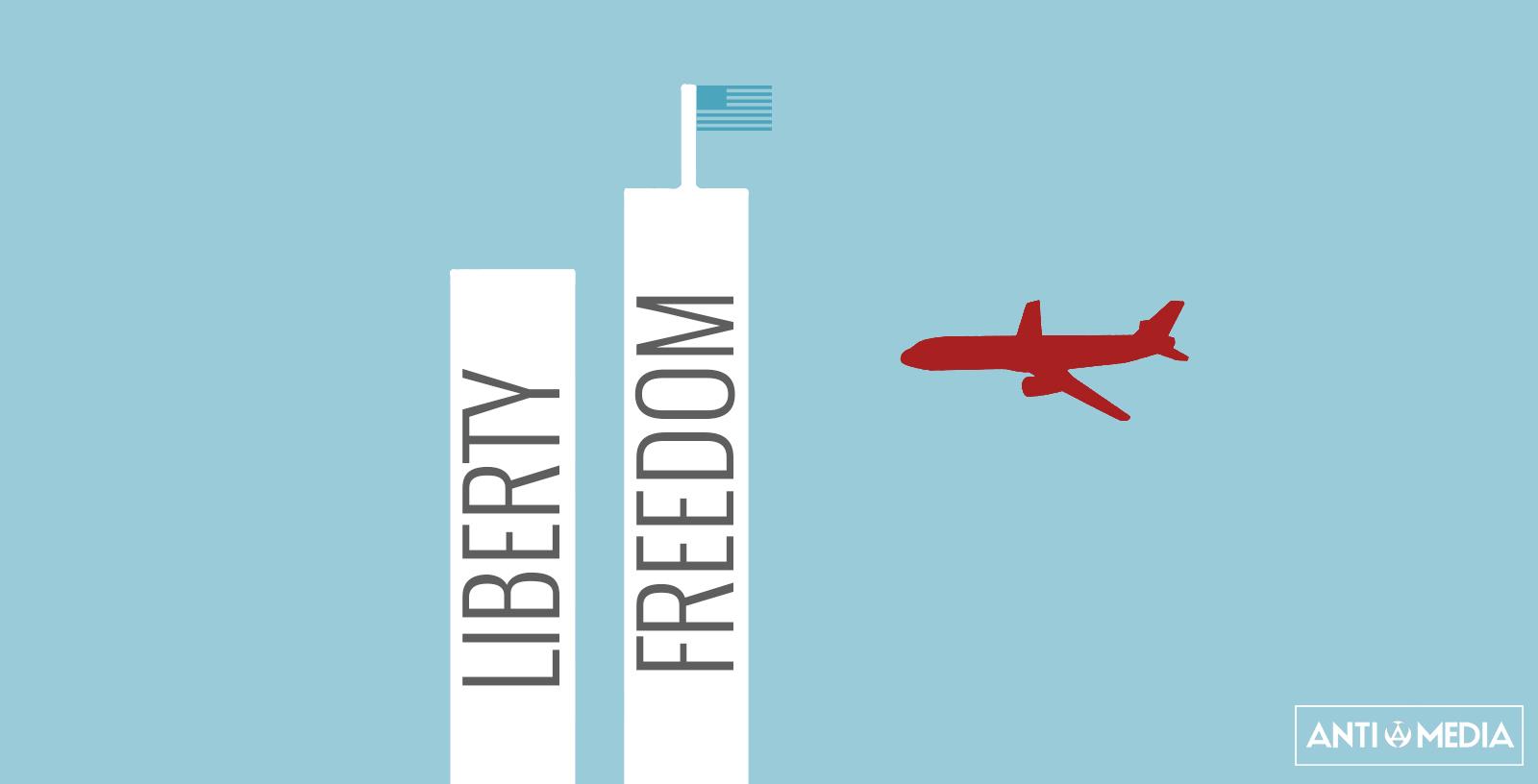 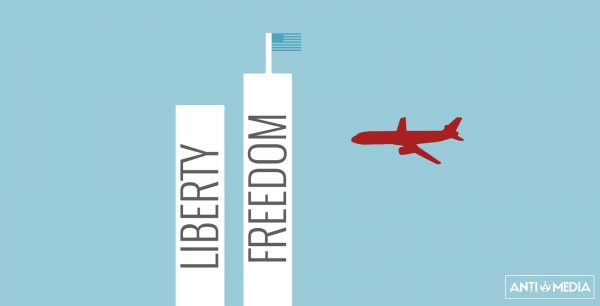 This year and every year, “NEVER FORGET” echoes through the neighborhoods, cities, and Facebook statuses of America. 14 years after 9/11, Americans still bear the cross of a nation victimized and scorned after the brutal attacks on the World Trade Center in 2001. While Americans — and politicians who are still intent on capitalizing on the tragedy — vow never to forget the fateful day, far too many citizens forget the liberties they have relinquished as a result. Lest today’s valiantly waving flags, government ceremonies, and TV news specials replaying the plane crashes coax you into forgetting, these nine essential freedoms have been usurped since 9/11:

1. The liberty to not be spied upon: Essential to a free society — at least as the founders of the United States saw it — was the freedom to be left alone. In the not too distant past, government agencies suspicious of citizens had to obtain warrants to investigate private citizens. They had to prove to a judge why they deserved to violate a person’s sacrosanct privacy from the State. Though surveillance programs were in place long before 9/11, the tragedy enabled much more far-reaching impositions.Multiple federal agencies — most notably the NSA — are enabled to surveil citizens, all the time — all around the world. The government’s paranoid desire for total surveillance has only grown since 9/11. The FBI, which built the NSA’s foundation for dragnet spying, continuously throws temper tantrums over its inability to spy on encrypted communications. The Department of “Justice” argued just this week that it should have access to all Americans’ emails. A separate court recently ruled that a case challenging NSA bulk data collection could not move forward because the plaintiff could not prove — due to government secrecy — that he was being surveilled.

2. The liberty to not be harassed by law enforcement: The federal government’s total surveillance state is a direct consequence of 9/11 — or rather, the political exploitation of it. However, at the local level, police departments not only conduct their own invasive spying with secret technology provided by the federal government — they pose a far greater danger. Where police officers were once trusted to protect life, they now threaten it. Currently, the risk of being killed by a police officer is anywhere from eight to 55 times greater than being killed by a terrorist. In 2015, police are on track to kill 1,100 Americans — and since 9/11, have killed more than died that day. This year, it was revealed that Chicago’s Homan Square operated as a black site without due process but replete with torture. Other violations by police, constitutionally speaking, include a basic protection against unwarranted searches and seizures. This makes unauthorized cavity searches on the side of the roadand civil asset forfeiture — a policy by which police have stolen millions of dollars from unaccused citizens — an egregious seizure of the freedoms Americans still drunkenly celebrate on national holidays. Checkpoints, anyone?

3. The freedom of movement and travel without being treated like a criminal: Considering how traumatized the collective American populace continues to be by incessant, repeated clips of two planes flying into the World Trade Center, it is unsurprising that the Transportation Security Administration (TSA), formed after 9/11, is accepted as a vital element of modern society. Millions of Americans routinely huddle in cramped airport security lines, removing their shoes and flashing their private parts to security agents via X-ray machines so as to avoid more invasive gropings. Recently, two agents were caught tag-teaming to grope attractive women. Theft of passenger belongings runs rampant among officers. Racial profiling is allowed by the Department of Homeland Security, which oversees the TSA. Unsurprisingly, these practices fail to find terrorists 95% of the time. Meanwhile, children in wheelchairs, the elderly, and otherwise innocent Americans are forced to endure what would amount to sexual harassment in any other environment. But rest assured, if travelers pay a special fee, they can bypass security lines. For your safety.

4. Freedom of Speech: While no one (that the government admits to) has been black-bagged for criticizing the government yet, the State has spent years incrementally criminalizing this fundamental right. In addition to designating anti-government activists, hippie communes, and Americans with seed libraries as potential terrorists, the federal government has made a habit of punishing individuals who attempt to shed light on the government’s crimes. From Bradley (Chelsea) Manning to Edward Snowden and countless others, those who attempt to inform the American people of the atrocities their government commits are promptly silenced. Though the story received little mainstream attention, the military’s new operating procedures condone killing journalists. Further, the people’s right to free speech has been widely suppressed. During the Bush years, protesters were cordoned off into “free speech zones” to air their grievances. Today, protests are heavily patrolled by police, who do not shy away from pestering — if not abusing — people peacefully exercising their most essential constitutional right.

5. The liberty to simply know what the government does: When President Obama campaigned for the presidency in 2008, he decried George W. Bush’s cloak of secrecy shrouding government actions. Obama vowed to be more transparent, to make the government truly work for the people by allowing them to know what it does. His presidency is almost over, but any echo of that sentiment has been silenced. His administration, self-designated the “most transparent in history,” is one of the least transparent and denies more Freedom of Information Act requests than ever. Lawmakers refuse to reveal details of foreign policy, surveillance, and more, citing “national security” as a blanket excuse. This justification is how they perpetuated continued warrantless spying even after the Patriot Act expired. It is how they have instigated perpetual war with little explanation beyond “grave threats” to the American people. To say more would be to endanger the people further, of course. Whenever politicians feel threatened by real questions, they need only parrot the need for “public safety” and drum up memories of 9/11 to shirk accountability.

6. The liberty to not be harassed by the military in your own home: Many people view the third amendment as archaic. The Revolutionary War is long over and soldiers are no longer “quartered.” However, one specific program — mutated after 9/11 — allows this violation on a daily basis. Following last year’s protests in Ferguson against police brutality, the Pentagon’s 1033 program has faced intense scrutiny for arming local police with high-powered military gear, from armored vehicles to battle regalia. This program has emboldened SWAT teams and other local police — paramilitary wings of law enforcement armed to the teeth — toincreasingly raid the homes of private citizens. “But they’re criminals!” loyalists might cry. But what about when they aren’t? Often, SWAT teams raid the wrong addresses, but even when they are in the right place, they inflict everything from beatings and murder on non-violent, often innocent citizens to shooting family pets. The 1033 program, intended to help fight the Drug War, increased in power after 9/11 — when its stated goal shifted toward preventing terrorism.

7. The right to a fair trial: When the near-mythical “founding fathers” crafted the Constitution, one of their greatest revolutions was ensuring fair trials to the accused. This banned cruel and unusual punishment while ensuring a speedy trial where the defendant was considered innocent until proven guilty — not the other way around, as had been practiced by despotic regimes throughout human history. However, this right to a fair trial has been increasingly eroded by autocratic elements within the so-called justice system, especially since 9/11. An Irish judge recently refused to extradite a terror suspect to the United States, citing fears he would endure cruel and unusual punishment. “Death by firing squad!” many patriots mourning 9/11 might chant. He is a terrorist, after all, and  “innocent until proven guilty” is a moniker of the weak and those hell-bent on seeing Americans murdered.

But what about the American citizens presumed guilty before an actual verdict is reached? Prosecutors have been criticized for exercising racism in jury selection, biasing courts in favor of conviction. One mentally ill black man died languishing away in prison for months — awaiting a (non-speedy) trial for allegedly stealing less than five dollars worth of snacks from a convenience store. In more high-profile cases, the government and media go out of their way to ensure defendants are presumed guilty long before their trials start. Such was the case with Ross Ulbricht (where FBI agents were found to have committed criminal acts during investigations and key evidence was suppressed). Chelsea Manning and others have faced similar fates. The government also actively campaigns against activists attempting to educate jurors about their rights. None of these violations of due process compete with the indefinite detention provision of the 2012-present National Defense Authorization Act (NDAA). Language found in Section 1021(b)(2) of the NDAA allows the president to order the indefinite detention of U.S. citizens without charge or trial, merely for being suspected of being a threat to national security.

8. The liberty of owning your body: Though not codified in the Constitution, a basic premise of liberty is self-ownership — that free individuals may choose what they want to do with and put in their bodies. Though the Drug War has been in full swing for decades, the events of 9/11 allowed the government to regulate people’s body chemistry more heavily. While the Patriot Act is widely associated with unwarranted surveillance — as it should be — it was used overwhelmingly to prosecute non-violent drug “crimes” and has helped to create the world’s largest prison population, because…freedom?

9. Economic liberty: While the state places many restrictions on economic freedom, it has done so for centuries through taxation, fees, fines, and regulations that favor corporations (such as the recent Trans-Pacific Partnership). Still, these policies have not been contingent on the 9/11 terror attacks. What 9/11 has allowed, however, are increased piles of tax dollars to fund military adventures throughout the world. Though the military chronically eats up trillions of dollars, every year it demands more money — and nearly every year it gets it. Without the jarring images of 9/11 branded into Americans’ brains, the military would have a much more difficult time securing funding. Those who disagree with such expenditures (whether out of fiscal responsibility or outrage at endless violence) must square off with the IRS — an entity more terrifying to most Americans than the government’s more murderous agencies.

While the events that transpired on 9/11 should never be forgotten — and should be commemorated — often, the nationalistic grandstanding that comes along with mourning the dead removes any possibility to mourn the freedoms lost — or the very literal lost and tortured lives of individuals around the world subjected to the aggressive foreign policy enabled by 9/11. While the government is categorically to blame for these violations, it is an unfortunate fact that Americans are guilty of creating an environment where crimes against humanity go unchecked and nearly every element of American life is regulated and surveilled. By allowing themselves to be manipulated by constant fear-mongering, Americans have allowed — if not applauded — this confiscation of their freedoms.