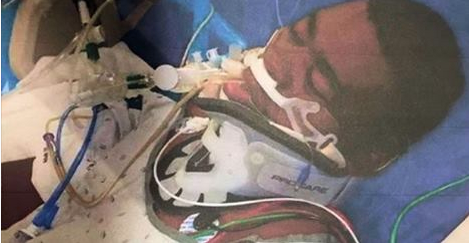 St. Louis County, MO —An arrest for minor traffic violations and brief time spent in jail led to such highly peculiar and suspect circumstances — including police turning away a desperately needed ambulance and an attempted hanging by shoelace — 44-year-old Bernard Scott is lucky to be alive.

In September 2014, according to the St. Louis Post-Dispatch, Bernard Scott was being held on $360 bail in the Pine Lawn jail in St. Louis County when he began to complain of abdominal pain and bleeding. Jailers summoned paramedics, who immediately tried to transport him to the emergency room.

Tried, because the jail supervisor refused to relinquish custody — even when paramedics insisted it was necessary.

According to public records obtained by the Post-Dispatch, Scott had prepared to go to the ER and changed into his street clothes for transport — but the jail supervisor abruptly changed his mind and refused to release him to paramedics at the last minute. Explaining to the supervisor that Scott had a painful mass in his abdomen and needed to see a doctor, the medics made a second request before leaving the scene. As their report states:

“PD again advised by EMS that pt should be transferred to ED for further medical evaluation.” Once again, the request was denied.

Just 14 minutes later, the jail had to call for another ambulance. Scott had lost consciousness, his muscles had stiffened, he was now aggressive and difficult to handle, and there were indications he had suffered brain damage, according to EMT reports.

“Police officers disclosed five minutes after the second ambulance arrived that they had found Scott hanging by his neck from a shoelace tied to his cell door,” reports the Post-Dispatch.

And that’s where things stop adding up.

Scott survived. After being hospitalized for over three weeks — 11 days of which were spent in a coma — he had something interesting to say:

“Why would I hang myself? I was in on traffic tickets.”

Answers aren’t easy to come by — a review of records found inconsistencies and discrepancies between the officers’ and paramedics’ reports and amongst the officers’ own reports that were never sorted out or accounted for following an internal investigation.

A potential explanation might be found in Anthony Gray, the municipal prosecutor, who — as Pine Lawn’s public safety director at the time — oversaw the police and jail. He claimed in an email to the Post-Dispatch that he was out of town at the time of Scott’s attempted suicide; but he did turn over the investigation to a sergeant — Willie Epps.

Sgt. Epps, according to the EMT report, is the supervisor who refused to release Scott for emergency treatment.

Interestingly, as Epps’ wrote in his report, he wasn’t even there at the time. Scott was being evaluated by medics when Epps left for ten minutes, his report stated; and when he returned, the ambulance was gone.

“What I wrote is what happened,” Epps stated, as reported by the Post-Dispatch.

Gray’s email went on to discuss this rather flagrant discrepancy:

“Epps provided an explanation for everything he did or did not do. I don’t recall the specifics. But judgment calls were made and the wisdom behind them were given due deference.”

Scott also remembered that the first ambulance driver “wanted to take me with him, but the guy wouldn’t let me leave.” And after that ambulance left, a police officer “told me he wasn’t going to let me out of jail unless I bonded out.”

The last thing he remembers is being led to a phone to call his aunt and cousin for help with bail.

With the highly-publicized in-custody death of activist Sandra Bland — which the sheriff’s’ department claims was a suicide despite lack of any typical precursor symptoms or behaviors — at least a portion of the official police reports need to be examined and officers questioned more thoroughly. The Anti-Media will report any updates as they become available.