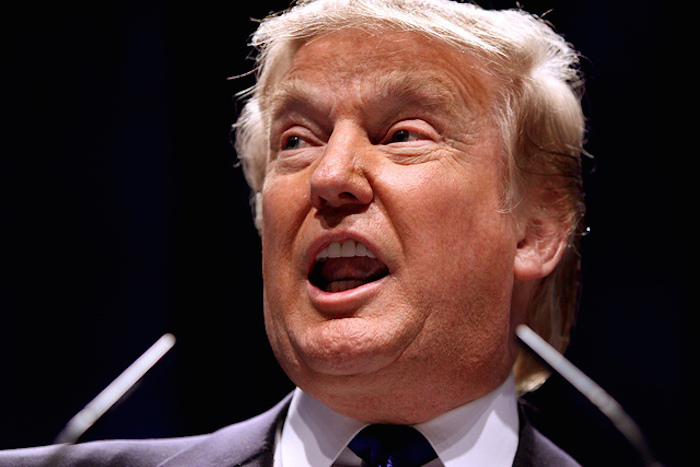 DALLAS (INTELLIHUB) — 2016 Presidential candidate Donald Trump is not only leading the early primaries but is rather dominating them as the foremost Republican choice. Not to mention the man just packed another arena, this time in Texas, with a robust crowd, an estimated 18,500 or more, who came from all over to watch the Trumpster speak.

Like Trump pointed out Monday evening, the networks don’t make it easy on him by any means. In fact he is probably the only candidate that has to prepare fresh, new, off the cuff, material for every event he attends as he is given live airtime in most cases. Far much more live coverage than any other candidate at this point in the race — and to top it all off he is using all of his own money to finance his campaign. Trump is taking no “blood money” from special interest groups or lobbyists and he’s in the lead.

I mean lets face it, like a wise man once told me, the polls are a “general consensus” of the public’s opinion, they reflect real numbers. And as it sits Trump has a real pulse on the Nation, its people, and its problems. After all, how would a politician, such as Jeb Bush or Hillary Clinton, be better at running the corporation of the United States having little to no business experience? Don’t you think that has been this country’s (corporation’s) problem the entire time? Maybe it’s time a proven businessman take the reins.

You see Washington D.C. is simply a 10 acre parcel which lies outside of the actual country. It’s a Vatican City of sorts and you can call it the U.S. Federal Government, a “quasi-corporation“. And in my opinion it’s never been run right, it has literally been drug down further with every presidency until it was most recently fully decimated by Barack Obama who has been a total failure as a President entirely.

WE NEED CHANGE, BUT NOT THE KIND OBAMA GAVE

If something doesn’t give we will likely all end up as slaves to our masters like we have seen time and time again throughout history with so many other countries. I guess you could say it’s the advancement of a “New World Order”, which former U.S. President Herbert Walker Bush mentioned in the early 90’s during a famous speech. It’s a worldwide agenda to form a one-world government and instill a one-world currency and apparently our ‘Trump Card’ may have surfaced as Donald J. Trump himself. And yes ladies and gentlemen sometimes the truth is stranger than fiction — believe it.

“We are killing it in the polls”, says Trump, which may be a reflection of reality in this country for once.

“They can never support me”, Trump said, calling out the mainstream media.

“They are fifty-percent good.”

Trump’s comments garnered a heavy, positive, reaction from the crowd before he went on to talk about how former Presidential candidate Mitt Romney raised “$434 million and didn’t win one race.” The amount of money current and previous campaigns have spent to push lies has been outrageous. These people have nothing to offer.

The bottom line is Trump is self-funded and is his own man. Now we just have to wait and see if the Powers-That-Be will allow him to continue on his path. Fingers crossed.