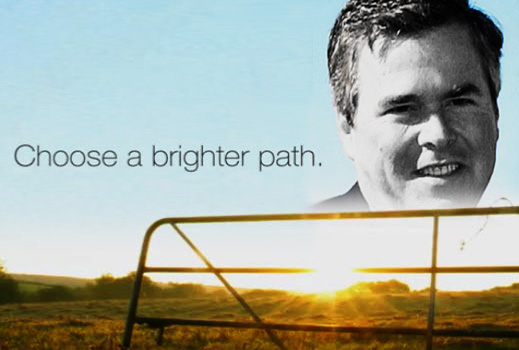 We already know that Bilderberg and Wall Street have chosen either Jeb or Hillary. They are the unofficial dynasty families in this country and no, the votes don’t matter.

Still, not that Trump isn’t a ringer who will likely never see the Oval Office, but have you seen the latest attack ad against him from the Jeb Bush camp?

Likely due to his dynasty upbringing, poor Jeb is so disconnected from the average person that his attempts to attack Trump just seem more and more off point and just ridiculous all the time.

Check out this latest one from Jeb Bush super PAC Right to Rise:

A lot of the things Trump is supposedly negative for mentioning here (which Jeb’s team portrays as Trump being in a “dark place”) are things most normal Americans have said themselves, including that The American Dream is dead (or, at least as George Carlin said, that you have to be asleep to believe it). Guess a lot of Americans are in a dark place right now, considering we live in modern America — a place that, it shouldn’t go without noting, wouldn’t be nearly as screwed up if it weren’t for Jeb’s family including his brother, father, and grandfather!

Then suddenly the lighting and music changes dramatically to an overly cheery, bright time lapse of the sun rising over a field (awww) and the tagline, “Choose a brighter path” (HAHAHHAHAHA!), complete with voiceover clips of Jeb talking a bunch of cliché nonsense about things like “growth that makes a difference for everyone,” as if he isn’t totally and utterly beholden to his warmongering Wall Street masters just like his daddy and brother were.

“Choose a brighter path?” Are you freakin’ serious??

It’s enough to make most Americans throw up in their mouths a little.

I actually laughed out loud when they showed B roll clips of the Statue of Liberty and flags waving in the wind at Liberty Plaza, then panned over toward the lower Manhattan skyline, but curiously did not raise the camera enough to show the World Trade Center and the newly rebuilt “Freedom Tower”.

Way to keep it classy there, Jeb!