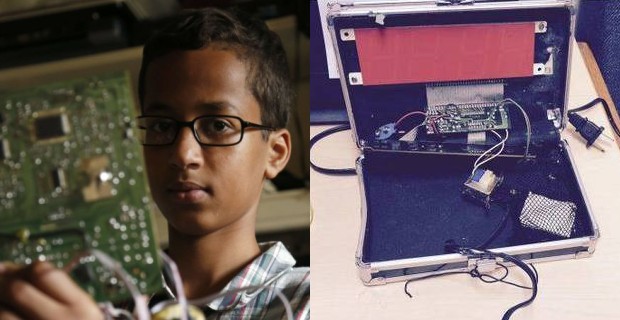 The President only intervenes when it’s politically correct 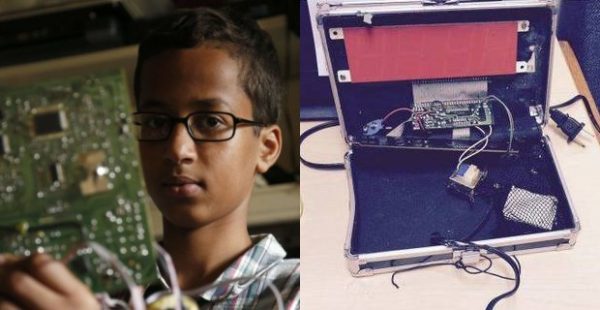 The national media is praising Barack Obama for inviting a Muslim teen to the White House after his clock was mistaken for a bomb by school officials in Texas, but students who have been suspended simply for wearing American flag T-shirts or playing with toy Nerf guns were totally ignored.

14-year-old Ahmed Mohamed built a clock to impress his teacher but ended up in handcuffs after police were called over concerns the object resembled a bomb.

The leftist media and social justice warrior ‘virtue signallers’ immediately leapt on the story to claim that Mohamed was targeted because he was a Muslim (and not because his “clock” looked nothing like a clock and more closely resembled a bomb in a briefcase).

They claimed that white kids wouldn’t be on the receiving end of the same kind of treatment. The hashtag #IStandWithAhmed immediately started trending on Twitter.

#IStandWithAhmed When a white kid builds nuclear fusion reactor it’s cool but when a Muslim builds a clock it’s not pic.twitter.com/TFwfg1lUf4

Never wasting an opportunity to ingratiate himself with the politically correct crowd, Obama reached out to Ahmed and invited him to visit the White House.   The notion that white kids wouldn’t be treated the same way and that Ahmed was only targeted because of his skin color or religion is completely bogus.   Innumerable non-Muslim kids have been disciplined, suspended and even SWAT-teamed for objects far less concerning than Ahmed’s clock.

Only this week, a North Texas student was hit with an in-school suspension for wearing an American flag t-shirt that didn’t even violate the school dress code. No White House invitation from Obama.

Students who wear American flag shirts on Cinco de Mayo are also routinely sent home from school and disciplined. Those cases didn’t attract a national media outcry, nor was there any presidential intervention.

Last year, a 7-year-old boy was suspended for chewing a pop tart into the shape of a gun. No national ourpouring of sympathy, no White House invitation from Obama.

Back in 2013, SWAT teams, bomb squads and canine units were sent to a school in Long Island, which was placed on lock down for hours, all over a lime green colored toy nerf gun that fires foam ‘bullets’. Although the student involved was probably traumatized by the experience, no invitation from Obama was forthcoming.   Obama is also attempting to milk the story to pose as being pro business and pro innovation, a sentiment that was noticeably less apparent when he infamously said, “you didn’t build that” during a speech 2012.   You will never see a national media outcry, a hashtag campaign, or a presidential intervention over an issue that flies in the face of political correctness.   To the left, defending American kids who are persecuted for wearing Old Glory just isn’t trendy enough, but if a Muslim called Mohamed gets in trouble for bringing something that resembles a bomb to school, liberals are falling over themselves to worship him.   I’ll leave you with the words of 13-year-old CJ Pearson, who draws attention to a number of other individuals who didn’t receive an invitation to the White House. Follow on Twitter: Follow @PrisonPlanet