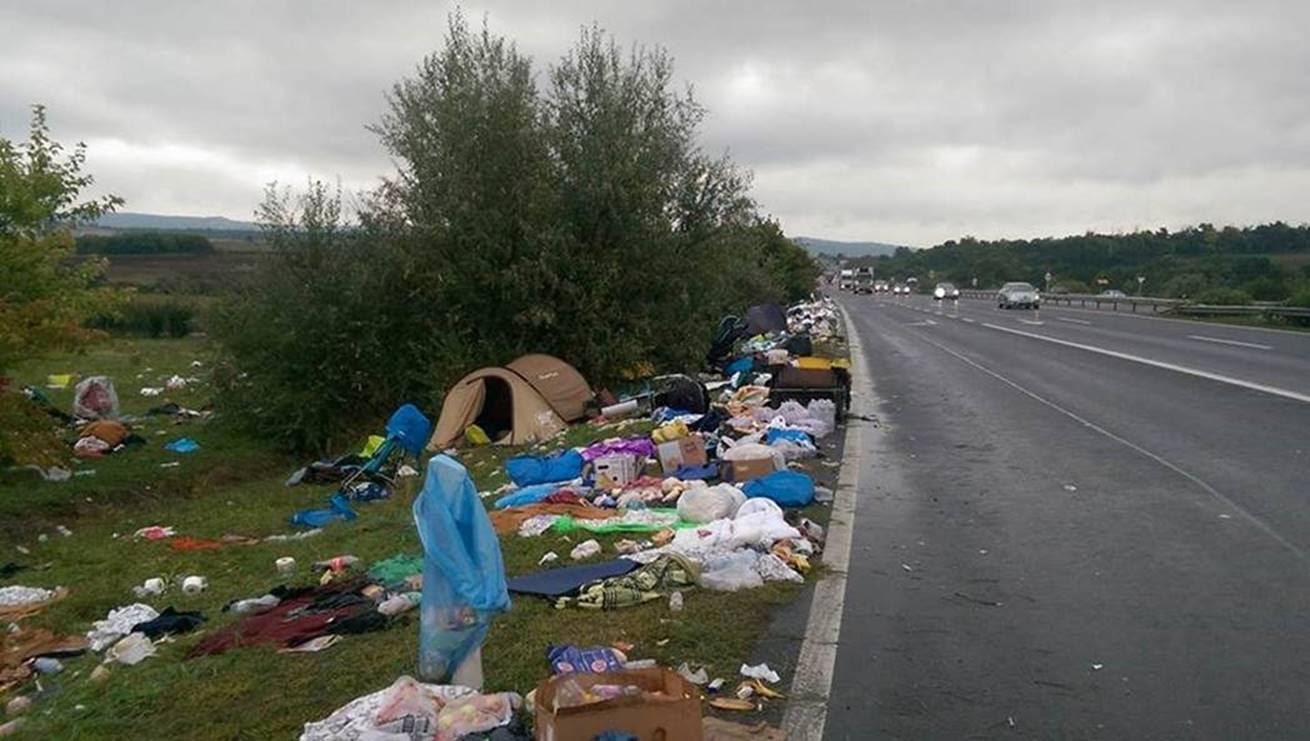 As I look at photos posted by witnesses at the Italian/Austrian border, Serbian/Hungarian border, and various train stations around Europe, I am wondering who is going to clean the mountains of trash left behind for miles and miles, as far as the eye can see, by the “refugees” from the Middle East.

“Why has everyone, from everywhere and all at once, decided to start heading towards Europe, five years into the Syrian civil war? This must be a manufactured mass migration.”

It is not what the refugees used on their journey, but what they left behind unused – discarded Red Cross packaged water, crates of peaches, untouched packaged food, unopened baby diapers, brand new strollers, car seats, toys, and other necessities for someone traveling with a baby. Since these items were left behind, it is obvious that there were no babies among them.

Refugees have taken over Greek Islands, turning them into a gang-like war zone. Greeks are afraid, hiding in their homes, unable to go to work, or to take their children to school. There is no respect for private property and there is no civilized propriety. They are burning cars and flags, throwing feces at passing cars and at people unfortunate enough to be in the way.

A witness at the Italian Austrian border, a Polish travel blog writer, describes circumstances of horror. “This huge mass of people, but these are absolute savages … Vulgar, throwing bottles, shouting loudly, ‘We want Germany.’… But is Germany a paradise now?”

“I saw how they surrounded a car of an elderly Italian woman, pulled her by her hair out of the car and wanted to drive away in the car. They tried to overturn the bus in which I traveled myself with a group of others. They were throwing feces at us, banging on the doors to force the driver to open them, spat at the windshield. How is this savagery to assimilate in Germany? The bus is now damaged, covered with feces, scratched, with broken windows.” His group had to travel with Italian police escort from then on. He described the entire area as a war zone.

Should we not be compassionate to our fellow Muslims who, by no fault of their own, are invading Europe, fleeing a civil war in Syria? Since they are mostly young men 20-30 years old, would it not make sense that they stayed with their families and fought for their country, protecting their wives, children, and the elderly? Why trek 4,000 km to another continent whose culture they hate and despise, instead of going to the nearby rich Arab and Muslim countries that could have given them familiar shelter and religious accommodations?

Saudi Arabia promised Germany that they would build a mosque for every 100 refugees they take in. Why? Are they trying to colonize Europe with Islam? Why not take these refugees into Saudi Arabia?

As the blogger said, even though he felt subconscious compassion, he was glad the refugees did not choose Poland as their destination. “Poles are not prepared to accept these people culturally or financially.”

Why would refugees seek Germany and Sweden? The Poland MEP, Janusz Koran-Mekka of the conservative-liberal party, shed some light during his recent speech at the EU.

“Poland does not have a problem with immigrants. Poland has a problem with immigrants, who under the absurd Dublin regime (the Dublin Regulation), are being forced to stay at concentration camps although they want to escape from Poland to Germany, Austria, and other EU countries. Why? Because Poland has significantly lower social benefits. If we were to abolish social benefits, there wouldn’t be any people coming to Poland and Europe just to live off of handouts. People willing to work are valuable, but they are being sent back to their countries and we take in those unwilling to work. This is a ridiculous policy that results in Europe being flooded with human garbage. Let’s state this clearly: human garbage that does not want to work. America built its power because it took in immigrants willing to work and it does not give any handouts. We are ruining Europe and this policy is the cause of the downfall of Europe.”

The Polish MEP is wrong that America is not taking in immigrants that are unwilling to work. We have our share of them on welfare rolls as soon as they get here. There are legal immigrants who are still waiting for the resolution of their cases but southern border illegal jumpers get red carpet treatment at the welfare trough. Social Security offices are jam-packed with illegals, who do not speak English and have no intention of assimilating into our culture.

Angela Tocila, another European blogger, made some interesting points in her September 9, 2015 post. I translate ad litteram or paraphrase parts of her eloquent essay. We all learned to share as kids and to be compassionate. We remember the UNICEF ads begging for a few dollars to feed the starving children of Africa yet they are still dying of hunger.

These “flower power” liberals are “pointing fingers and accusing that we are not in solidarity with the downtrodden on a blind quest with a fixed destination, Germany or nothing. Germany or I am going to throw my wife and child on the train tracks, Germany or death. The “flower power” ilk forces me to respond if I want to take in a family of refugees in my own home, in the name of human solidarity; they are trying to blackmail me into a sentimental guilt trip that I am not sensitive to, and I answer NO.”

She would not take in refugees because she does not have any duty or responsibility towards them. “That does not mean that I am insensitive to the drama of many, to the images of drowned kids whose dads survived miraculously while trying to save their kids. I am not insensitive to the male invasion who uses their women and children as shields, place them on train tracks or throw them through a fence.” I loathe people who do not bathe, who demand that I cover my arms and legs in their presence, for fear that I might offend their religious obsessions, who would treat me in my own home as half a human being or less. I don’t want to feel obligated to find a shepherd to buy a sheep because I eat pork, beef, beans with smoked pork, or stuffed cabbage with pork.” If you stay in my house, you must eat what I eat. I don’t want to enter into a conflict with a male who treats his wife like a rag, while trying to explain to him that she is just as much of a human being as he is. I am agnostic and I would not want to create a prayer space in my own home and to respect a religious ritual foreign to me and to my culture. I would not want to become the victim of the conflict between the Shia family in my home and the Sunni family in my neighbor’s home. Last but not least, I would not take in a refugee family in my home when the conflict was caused by those who finance it and are responsible, the military industrial complex.” But the most compelling argument was, “I don’t want to wake up one morning with my throat slashed because I might be Christian.”

The liberal do-gooders have moved from adopting starving African children to oppressed Afghani women and girls, to stopping the Darfur genocide caused by Muslims, to now adopting a refugee family from Syria. And the world’s problems seem to get worse while liberals are mum about the slaughter of Christians and Yezidis by ISIS.

Liberal humanitarians will try to run cover and explain benignly why 1,500 Muslims chanting Alahu Akbar, throwing rocks and bottles at police, are rioting at the closed Roszke-Horkos border crossing from Serbia into Hungary. Hungarian police fired tear gas and water cannons at the refugees as they broke through the make-shift fence.