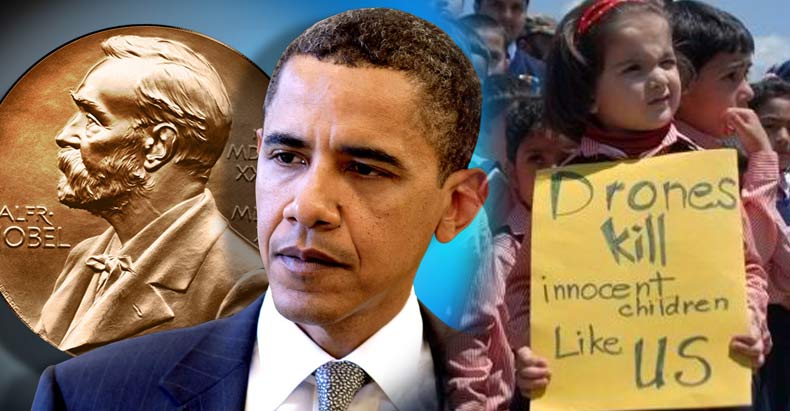 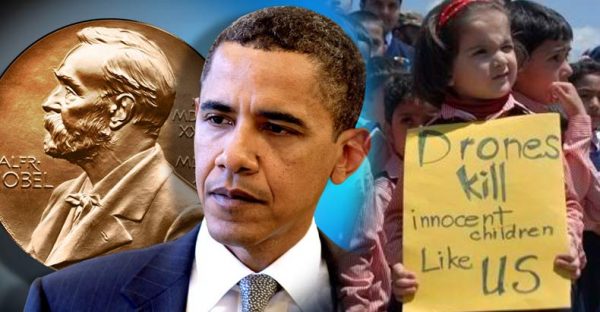 In 2009, President Barack Obama received the Nobel Peace Prize before he was even able to prove that he was worthy of it. Once Obama got into office, however, he continued the wars started by Bush and even instigated a few of his own, proving himself to be just as much of a warmongering president as Bush was, if not worse.

Just two years after receiving the prize for being the most peace-promoting person in the world, Obama murdered a US citizen and child with a drone. On October 14, 2011, American teen, Abdul Anwar al-Awlaki was killed as he ate dinner by a CIA drone strike, ordered by Obama.

While he wasn’t murdering American children, Obama was invading Libya and laying waste to their innocent civilians. A Human Rights Watch report would go on to detail eight incidents where at least 72 Libyan civilians died as a result of the aerial campaign.

A report conducted by Stanford and New York Universities’ Law schools found that between 2,562 and 3,325 people were killed by drone strikes in Pakistan between June 2004 and mid-September 2012. Anywhere between 474 and 881 of those were civilians, and 176 were children.

The fact that he received the prize only to go on to expand wars and the drone program has made the former Nobel Secretary come forward to say that he regrets his decision to give Obama the peace prize.

Former Nobel Secretary Geir Lundestad told the AP this week that he felt the prize was a mistake.

“We thought it would strengthen Obama and it didn’t have this effect,” he said.

“No Nobel Peace Prize ever elicited more attention than the 2009 prize to Barack Obama,” Lundestad wrote in his memoirs.

“Even many of Obama’s supporters believed that the prize was a mistake, in that sense the committee didn’t achieve what it had hoped for,” he said.

Obama himself even admitted that he was not worthy of the prize when he was heckled by a reporter during a speech in Sweden.

In 2013, the reporter asked him “I was wondering, could you describe the dilemma to being a Nobel Peace Prize winner and getting ready to attack Syria?”

Obama’s response was surprising. He actually told the reporter, “I think I started the speech by saying that compared to previous recipients I was certainly unworthy, but what I also described is the challenge all of us face, when we believe in peace but we confront, a world that is full of violence.”

Funny that it took until the end of Obama’s presidency to publicly regret the decision to give one of the largest war criminals in the history of the world, the Nobel prize for peace. It is certainly better late than never though.

Share this article with your friends and family who may still think that Obama deserved such a prestigious award.